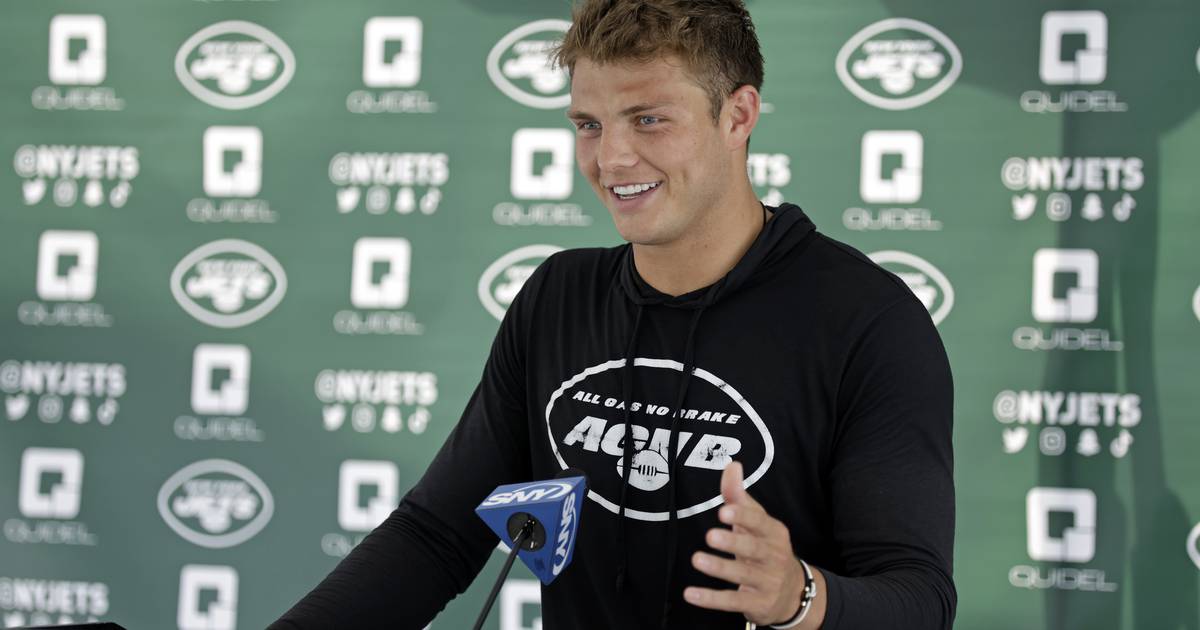 Zach Wilson has diverted from the norms of his generation. He deleted his social media.

Not that the Jets quarterback wiped away his accounts, which can still be found on Instagram or Twitter with content that’s mined by his PR team. But Wilson said he deleted those apps from his phone, just as he’s done since college before every season, because of the potential for distractions.

“I don’t have access to that stuff,” he said.

It’s probably a good idea at this stage of his career.

There’s not only the scrutiny of being the No. 2 pick and the starting quarterback in New York, but also interest in his love life amid unsubstantiated allegations of Wilson seeing his mother’s best friend.

Wilson’s mother, Lisa, is a prolific user of Instagram.

“For me, it comes to limiting to voices I need to really hear,” Zach Wilson said. “And right now, it’s listening to what my coaches have to say, what my quarterbacks have to say and really my teammates and what we’re thinking.

“Even parents sometimes can be a distraction.”

On the field and with the Jets fanbase, Wilson is still enjoying a honeymoon period. The franchise handed him the starting job despite last season’s struggles, and is promoting his slow progression into the franchise face worthy of such a draft position.

The consistent theme during training camp is Wilson has improved in three areas from a year ago: his confidence, his knowledge of the schemes and his ability to go off script to make a play. Still, it may take more time to see it manifest on the field.

“You want everyone to play at a Hall of Fame level but we also have to understand the progress he’s developing, how hard it is to play the quarterback position,” head coach Robert Saleh said. “What I can say is that he’s definitely better than he was a year ago at this point.”

“The more comfortable he gets, the more we’re going to see his arm talent and athleticism.”

Tuesday was largely positive for Wilson. A day after struggling in the 11-on-11 portion of practice, Wilson moved the ball effectively against the Jets defense.

It finished with a negative for Wilson, however, when he failed to reach the end zone after marching down the field for a 1st-and-goal. He was eventually sacked on 4th and 5 by Jabari Zuniga.

Then Wilson threw the ball across the field in frustration.

“I got to step in the pocket. We’ll watch it on film but I want to stick it on them there,” Wilson said. “Hopefully it falls it in the end zone. But that’s why we run that play—to learn from it.”

“Sometimes you just get beat,” the coach said. “Zuniga showed up right when Zach was about to let it rip. If it was one of those situations where Zach could’ve stepped up and maybe extend the play, but I thought Zuniga got him pretty clean.”

Regardless of whether he missed a potential touchdown, Wilson said he won’t be seeing it on his phone.

The Daily News sports editors handpick the week’s best Yankees stories from our award-winning columnists and beat writers. Delivered to your inbox every Wednesday.

“Who is scrutinizing? I’m sorry, I don’t read any of your guy’s stuff,” he said.

Temperatures hit the 90s on Tuesday and Jets practice bled into the afternoon, prime time for sunlight, which typically wears out those gigantic lineman.

Saleh gave credit to the biggest of them all—Mekhi Becton—for gutting it out as he recovers from last year’s injury-riddled campaign.

“For a big man like him, and it’s hot, I just appreciate the fact that he’s absolutely grinding,” Saleh said. “He’s getting better every day.”

Becton has dealt with conditioning issues and has been moved from left tackle to right. But the coach said Tuesday he still sees why the team drafted Becton 11th overall in 2020.

“This is why we say we think he’s transcendent,” Saleh said. “He’s got feet like a small guy, he moves like a small guy. But he’s a massive human being. And he’s made for any scheme you want.

“He’s special and really thing that could ever stand in the way of Mekhi is Mekhi. He’s doing a really good job of moving forward and being the best version of himself.”