Hank may be adorable, but don’t be fooled – this dog is quite a handful.

That’s according to Christine Clauder, from Houston, who found Hank, a stray, a few months ago in an industrial part of town.

Though he’s “an amazing dog,” he’s also high energy and requires a lot of attention, something Clauder and her family aren’t equipped to handle, Clauder told Fox News.

Instead, she explained that she’s currently looking for a job and once she starts working again, she won’t be able to stay home with Hank all day. Similarly, her husband is gone for eight hours a day, too.

A website to help Hank the dog (pictured) find his forever has gone viral for its humor and use of curse words.
(Courtesy of Christine Clauder)

“Hank cannot be [alone], and he doesn’t deserve to be alone – at least during this stage in his life,” Clauder said, adding that Hank doesn’t do well locked in a crate. “That’s just not his personality.”

Clauder said she built a website, to help find Hank a forever home.

The site has since gone viral for its hilarious descriptions and use of curse words.

On the site, pleaseadopthank.com, Clauder jokes about the moment she and her family found Hank writing, “While we were parked outside the Red Bull factory, Hank flew into our passenger side and immediately helped himself to our stash of road trip snacks like a teenager raiding the fridge after school.”

The ad continues: “He’s 54 pounds of pure, unadulterated, kinetic energy with eyes like the ocean. Unfortunately, that ocean also sank the Titanic.”

Clauder also describes Hank as having an “always-on personality” and needing a “loving, active home with someone willing to train him.”

Clauder, who has a background in digital marketing, explained that she chose to use humor and curse words because that was going to “capture the attention of the people I want to advertise to.”

She added that it also “reflected my feelings.” 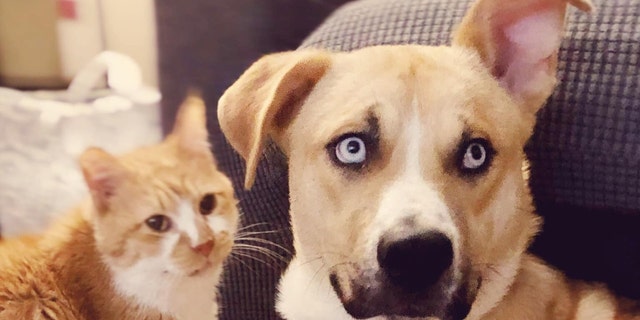 Christine Clauder told Fox that she and her family found Hank in an industrial part of Houston and quickly found out how much energy and attention Hank needs.
(Courtesy of Christine Clauder)

“I needed the website to be absolutely clear in terms of Hank’s personality,” she added. “But I also needed to be truthful because I did not want to build a website or I did not want to advertise Hank as just a great family dog with small babies and children, because that’s not Hank. And being honest about his personality would reduce the chances of a return.”

Though some people were offended by Clauder’s use of curse words, she told Fox it was intentional.

“If you’re offended by words on a website, Hank isn’t the dog for you because Hank is an offensive dog…and you will need a thick skin and that sense of humor to be able to raise him,” she said. 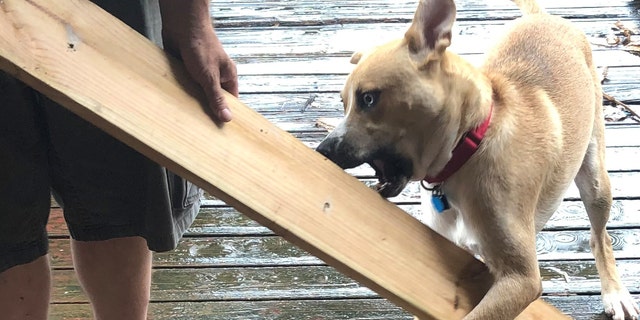 Clauder made the website to help find Hank a home and said she used humor and curse words to attract the right kind of people.
(Courtesy of Christine Clauder)

Clauder admits she built the site without permission from Friends for Life animal shelter – which is handling Hank’s adoption – and she anticipated being asked to take the site down.

Instead, Clauder said, the shelter’s executive director posted a link to the website on Facebook and wrote: “F—ing Adopt Hank.”

“I felt like I had received the golden blessing from the top of the top. And we just went from there,” Clauder said.

Some of Hank’s best qualities, according to Clauder, are his loyalty, curiosity and intelligence.

“He makes us laugh every single day with his shenanigans and he is so sassy,” Clauder said. “He just stares at you with those bright blue eyes and you can see exactly what he’s thinking.” 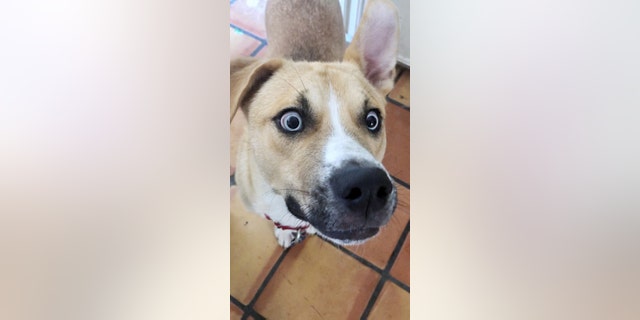 Though her family isn’t equipped to care for Hank, Clauder told Fox that he’s a “fantastic dog” and makes her family laugh every day.
(Courtesy of Christine Clauder)

Hank has also helped Clauder heal after the loss of another pet. She explained that her previous dog died just the day before she and her family found Hank.

Since Clauder’s adoption ad has gone viral, hundreds of people have called the Friends for Life shelter and at least 50 people have applied to adopt him.

Though he hasn’t been adopted yet, Hank is meeting families and doing sleepovers with families to see if he can find a family that’s a good fit. But Clauder adds that making sure Hank gets placed with the right home is more important than rushing to get him adopted. 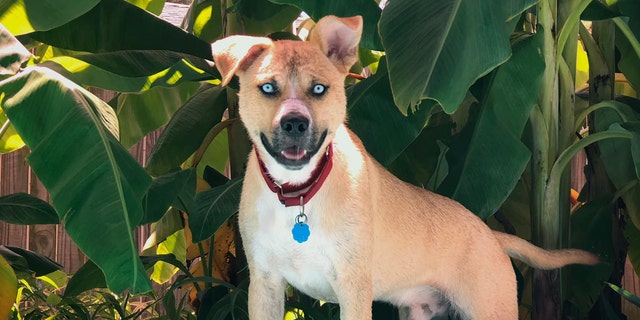 Though she’s had some pushback on the curse words, Clauder told Fox: “If you’re offended by words on a website, Hank isn’t the dog for you because Hank is an offensive dog.”
(Courtesy of Christine Clauder)

“I really do think that he is a fantastic dog…we’re looking for his perfect family,” she said.