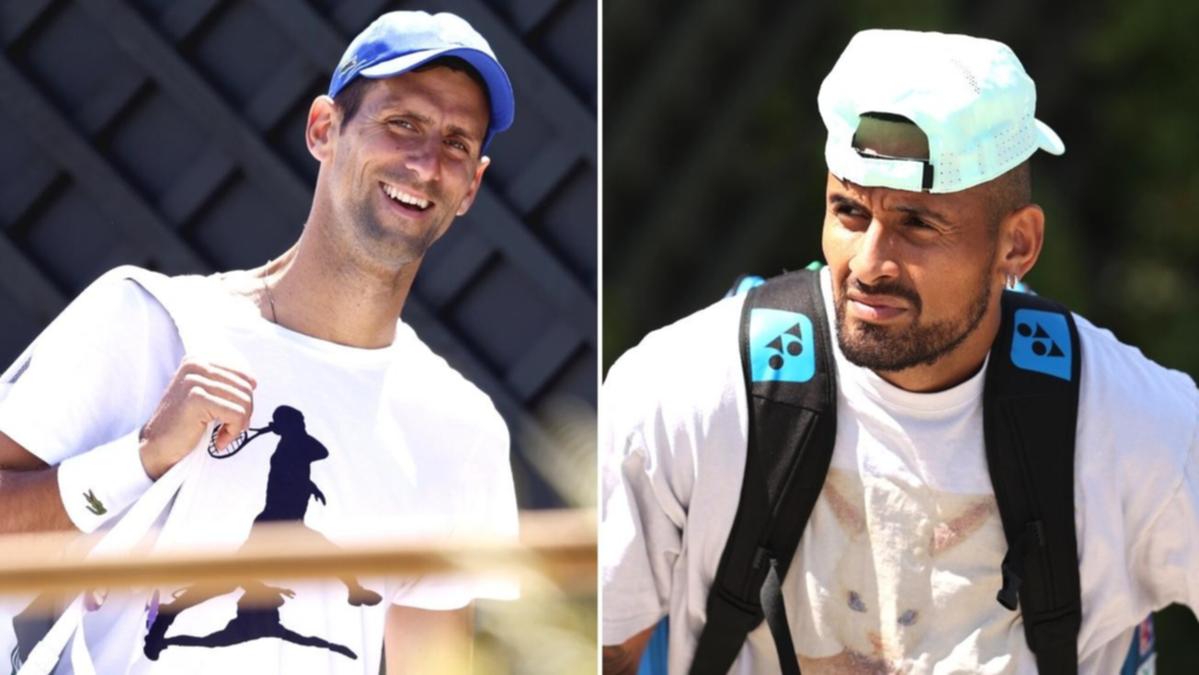 They may be playing for a $A3.5M prize as they clash for the Wimbledon title on Sunday, but Nick Kyrgios and Novak Djokovic have now apparently agreed to a tasty side bet.

The unlikely but evidently blossoming ‘bromance’ between the pair, which has come to light as they prepare to do battle in Sunday’s final, took a new tongue-in-cheek twist on the eve of the match when the pair indulged in an Instagram chat, doubtless to the delight of their millions of followers.

Watch more on the pair’s matchup in the video above

The finalists, who were once famously at daggers drawn, have been getting on much better, even becoming social media buddies, ever since Kyrgios proved Djokovic’s main defender during his detention ordeal in Melbourne before the Australian Open.

Now, the two budding chums have agreed they should get out for dinner, with the winner footing the bill, even if Kyrgios is also apparently keen they then should go out and have a crazy time at a nightclub.

The pair met at practice and had a word before taking the conversation to social media.

Djokovic: “It took you five years to say something nice about me.”

Kyrgios: “But I defended you when it mattered.”

Djokovic: “You did, I appreciate that.”

Djokovic: “If you are inviting me for a drink or dinner, I accept. P.S. Winner of tomorrow pays.”

Kyrgios: “Deal, let’s go to a nightclub and go nuts.”

That last comment may well have been Kyrgios’s cheeky nod to the photos taken at a nightclub in Belgrade in the middle of the COVID pandemic when Djokovic, organiser of the controversial Adria tournaments, was seen dancing topless.

At the time, Kyrgios was deeply unimpressed.

“Boneheaded decision to go ahead with the ‘exhibition’ speedy recovery fellas, but that’s what happens when you disregard all protocols. This IS NOT A JOKE,” he tweeted.

Speaking to reporters on Friday, Kyrgios explained how the pair’s relationship has developed significantly since the pandemic.

“We definitely have a bit of bromance now, which is weird,” Kyrgios said.

“Everyone knows there was no love lost for a while there. I think it was healthy for the sport. Every time we played each other, there was hype around it. It was interesting for the media, the people watching, all that.

“I felt like I was almost the only player to stand up for him with all the drama at the Australian Open. I feel like that’s where respect is earned. Not on the tennis court but when a real-life crisis is happening and someone stands up for you.

“We actually message each other on DMs on Instagram now. It’s real weird. Earlier in the week he was like ‘hopefully I’ll see you Sunday’.”

Djokovic stopped short of calling it a ‘bromance,’ but he admitted the pair were much more friendly now

“I don’t know if we can call it a bromance yet but we have a much better relationship. I respect him a lot for sticking up to me in January,” Djokovic said.

“Honestly, as a tennis fan, I’m glad that he’s in the finals because he’s got so much talent,

“For the quality player that he is, this is where he needs to be, and he deserves to be.”