Just another day of driving while Black…

Officials in Caledonia, Wisconsin are claiming that a viral video that appears to show an officer planting something in a car during a traffic stop isn’t what it looks like. The footage captured on a passenger’s cell phone shows an officer tossing a small plastic bag into the backseat of a car before putting his gloves on to presumably conduct a search. When questioned about what he tossed into the car, the officer seems unwilling to answer before the clip ends.[/caption]

After launching an investigation into the incident, Caledonia Police Chief Christopher Botsch released a statement on Facebook. Chief Botsch claimed that the plastic was an empty bag removed from another passenger’s pocket during a search and the officer in question simply discarded it into the car. The post included bodycam footage from two different cops, the one who retrieved the plastic from a passenger’s pocket, and the one in the viral clip discarding it. 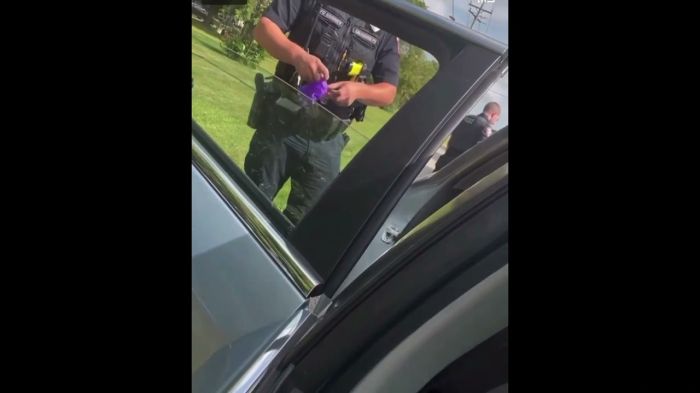 “On 07-21-21 at about 3:22pm, officers conducted a traffic stop for a vehicle traveling 63 mph in a 45 mph zone,” reads the statement. “The vehicle was occupied by a driver along with front and rear passengers. The driver was identified by her driver’s license. The front passenger lawfully declined to identify himself. The rear passengers were not wearing their seat-belts and were asked to identify themselves.

The empty corner tear was turned over by the searching officer to another officer who was on scene. That officer turned it over to the officer who is seen on video. Since there were NO DRUGS in the corner tear, the officers discarded the empty packaging material in the vehicle. This is what was observed in the video.

Essentially, he appears to be discarding the empty baggie. While we would discourage officers from discarding items into a citizen’s vehicle, the video is clear that the officer is NOT planting evidence or doing anything illegal. Additionally, the empty corner tear is not itself illegal.”

Although the two longer bodycam videos resolve accusations of planting drugs, they also raise new questions. The statement claims that the officers pulled the car over for driving 63 mph in a 45 mph zone. The driver pulled over accordingly and provided ID to the officers.

If they only observed speeding and unbuckled seatbelts, why did they search the occupants of the car at all? These offenses only warranted tickets, not the handcuffs that were used on one of the passengers. Nothing serious or illegal was discovered beyond the initial speeding, so what probable cause could the police have possibly had? The officer in the viral video may have been mistakenly accused, but he was also suspiciously skilled at throwing that baggie.

At best, this all looks like the overzealous policing that could easily escalate to something far more insidious.

Who are you going to believe, the police or your lying eyes?