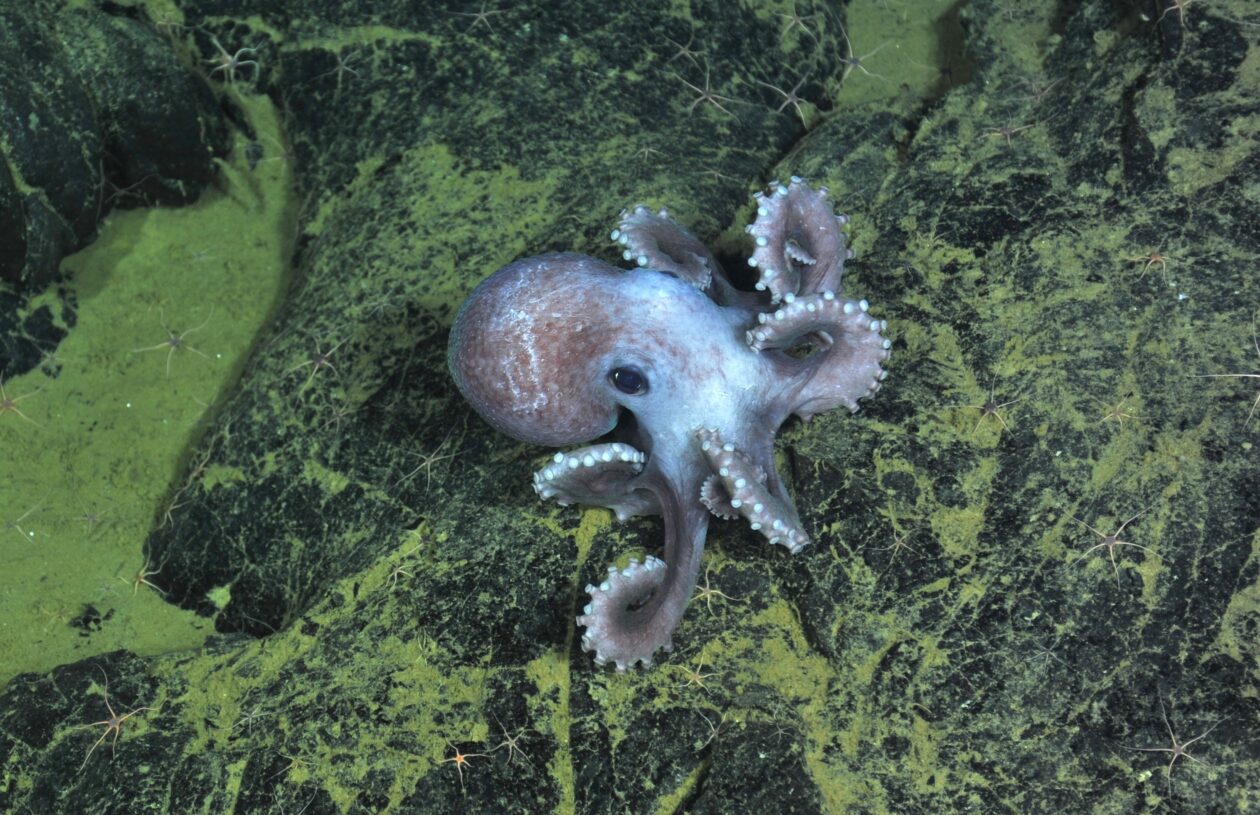 Are intelligent aliens living among us? A newly published novel just might lead you to think so — and in this case, the aliens aren’t visitors from another planet.

Instead, they’re octopuses, the eight-legged denizens of the deep that are celebrated in movies (including the Oscar-winning documentary “My Octopus Teacher”) and on the ice rink (thanks to the Kraken, the Seattle hockey team that’s getting set for its second NHL season.)

Ray Nayler, who wrote the novel titled “The Mountain in the Sea,” says he chose the octopus to serve as the designated alien for his science-fiction plot in part because it’s “a creature that has a structure totally different from ours, but in whom we recognize curiosity, which is what I think we find often most human in ourselves.”

Nayler doesn’t stop there: The promises and perils of artificial intelligence also figure prominently in the plot — in a way that sparks musings about how we’ll deal with AI, with kindred species on our planet, and perhaps eventually with extraterrestrial intelligence as well.

Dominic Sivitilli, a neuroscientist and astrobiologist at the University of Washington, says such musings are what led him to focus his studies on octopuses. “I suddenly had this model for what intelligence might look like, had it had a completely different evolutionary origin … possibly on another world, in another solar system,” he says. “And so they became a bit of a model to me for what extraterrestrial intelligence might end up looking like.”

Nayler and Sivitilli discuss animal intelligence, artificial intelligence and the prospects for cross-species communication in the latest episode of Fiction Science, a podcast that focuses on the intersection of science, technology, fiction and culture.

Octopuses (or should that be “octopi”?) have long held fascination for us humans, and not just because of their sea-monster vibe. Nayler notes that they’re among the aquarium animals most likely to be named. “There’s maybe a dolphin, and a seal maybe, at the outside, and a couple of penguins might get names,” he says. “And then the octopus usually gets a name as well.”

Some octopus traits are so clever, it’s eerie: They’re masters of disguise, thanks to their color-shifting skin. Although there isn’t a bone in their bodies, they’re adept at walking across the ocean floor (or, in rare cases, across dry land). They’re also capable of rewriting their own RNA to adapt to their environment.

But the main attraction in Nayler’s book, and in Sivitilli’s research, is the mind of an octopus. The brain power of an octopus is widely distributed around its body, and particularly in its arms. Sivitilli draws parallels to the way smart TVs, smart watches, AI agents and even self-driving cars perform tasks for us without us knowing about it. In the same way, the central consciousness of an octopus may be only loosely connected to the smarts in its arms.

“It’s an incredible model, and I definitely love to speculate how they’re possibly seeing or perceiving the world,” Sivitilli says.

In his novel, Nayler turns the speculation dial up to 11 — and blends in a subplot that focuses on an android who became so humanlike they were forced into exile on an island in Vietnam’s Con Dao Archipelago.

The island becomes the center for a shadowy tech corporation’s effort to figure out what the octopuses are up to offshore — and when an outside expert is brought in to investigate, the story takes on the flavor of an alien-contact tale reminiscent of the movie “Arrival” (which was based on a short story by Seattle-area author Ted Chiang).

“Quite frankly, I don’t think that human beings understand very well how we are intelligent, and how our own bodies work, and how we make decisions and things like that, much less an octopus and ants or anything else,” Nayler says. “I think this goes for AI as well. I think we recognize AI as being intelligent when it makes human-like decisions. … All we’re doing is measuring its likeness.”

In the book, Nayler explores some emerging concepts in the science of communication. One such concept is biosemiotics — the idea that all of life’s processes are based on the application of signs and codes.

Another concept is exaptation — the idea that creatures can take biological systems that evolved for one purpose and use them for a different purpose. Nayler’s octopuses, for example, take advantage of a color-shifting behavior known as the “passing cloud” as a means of communication. The author even created a series of symbols for the fictional sea creatures to flash on their skin.

What could we learn from the smarts of an octopus? “Well, there’s Doctor Octopus,” Sivitilli says jokingly, in a reference to the Marvel comic-book villain.

“How do you control, like the octopus does, this soft limb that can bend in any direction anywhere down its length?” he says. “That’s in regard to robotics. But just in distributed computing, things like edge computing, I think it’s really interesting looking at how the peripheral nervous system of the octopus is communicating to generate such adaptive behavior.”

Nayler says the way an octopus thinks could be applied to all sorts of distributed networks — including swarms of autonomous drones, which play a big role in “The Mountain in the Sea.”

But Nayler is hoping readers won’t become fixated on the futuristic technologies described in the novel.

“I hope that they come away from the book having felt that they went to another place, and that that place was fascinating and absorbing,” he says. “And then I hope that it leaves them with some questions about the world and their place in it that they can ponder at their leisure afterward.”

Check out the original version of this report on Cosmic Log for book recommendations from Ray Nayler and Dominic Sivitilli.

My co-host for the Fiction Science podcast is Dominica Phetteplace, an award-winning writer who is a graduate of the Clarion West Writers Workshop and currently lives in Berkeley, Calif. To learn more about Phetteplace, check out her website, DominicaPhetteplace.com.