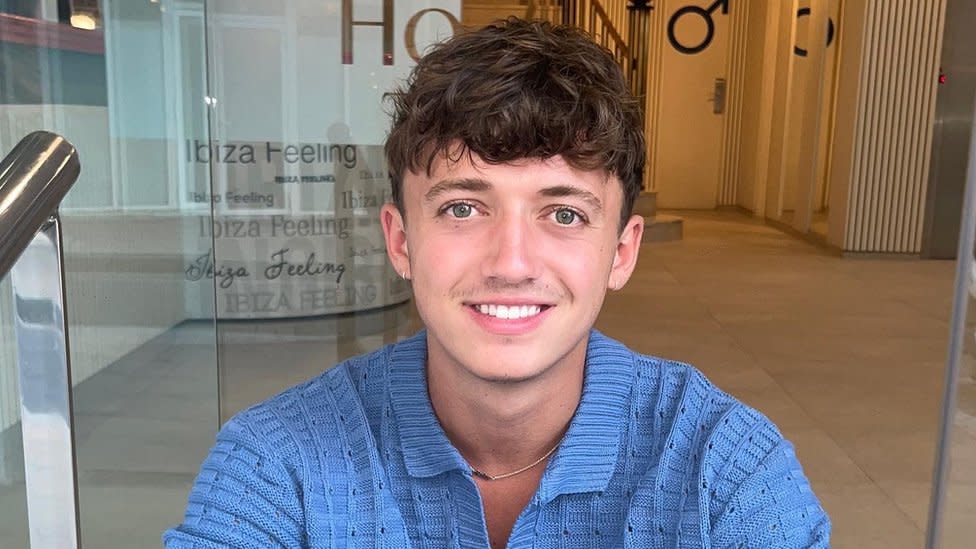 “The first ever video I did with my Nan on TikTok, I think it’s on almost 20 million views now.”

During lockdown Lewis Leigh, from Merthyr Tydfil, started posting videos of him dancing with his family on TikTok.

Now, two years after his first post the 20-year-old has 1.7m followers, and has an agent to represent him.

He is one of a growing number of Welsh stars who consider TikTok their full time job.

A recent Ofcom report found that young people in Wales spend more time on TikTok than young people in any other part of the UK, with them spending over an hour on the app daily, with 79% of 15-24-year-olds who are online having a TikTok account.

From dancing nanas, to short prank videos, what is behind the growing use of the platform in Wales, and why are so many young people quitting their jobs to become TikTok stars?

Growing up in a house of dancers, Lewis posted short videos on Facebook of him dancing, which he says his friends loved and thought were really funny.

Then when he was in college TikTok became the next big thing, and when his friends encouraged him to give it a go, little did he know his videos would be viewed by millions around the world.

The videos, which take him 10 to 30 minutes to film, often include him dancing with his mum – who used to be a professional dancer – and dad – who did street dance for years.

But it’s the videos with his Nanny Phyllis, 77, which have blown up the internet.

He said: “When I first asked her if she wanted to get involved in TikTok, she was like “yeah whatever Lew”.

“Obviously me and my nan are the TikTok duo that everyone loves.”

Lewis said doing the videos with his nan had made them much closer.

Now, Lewis, who quit his job in a restaurant after his work started to get in the way with events he needed to attend for social media, has an agent to represent him, which he said even with them taking a percentage of what he earnt was still worth it.

Lewis said he believed the popularity of TikTok in Wales was due to people wanting to express themselves.

He said: “Specifically in Wales, maybe younger people find it hard, because obviously there’s a lot of villages where everyone knows each other, except for cities like Cardiff and Swansea”.

“I feel like some people may want to use TikTok if they want to express themselves, and aren’t comfortable doing it in real life.”

‘TikTok is my full time job’

Catherine Keenan, 31, from Newport, makes TikTok’s with her partner Shaun and their two children, who are five and nine.

She joined TikTok in 2019, and makes an average of seven videos per week, and said creating content for social media was her full time job.

“I do work across all social media platforms including TikTok, YouTube, Facebook and Instagram. TikTok is my main source of income and was where it all started,” she said.

Catherine said she has seen the platform’s popularity boom, which she thinks is partly down to Covid and people spending more time at home during lockdown.

She said: “I don’t know if in Wales we’ve spent more time on TikTok than England has because we came out of lockdown later.

“I think TikTok would have done well anyway without Covid, but I think Covid has helped push it that bit further.”

Dean Morris, 27, described the TikToks he makes as “quite geeky humour, mixed with a bit of self-deprecation to make other people laugh”.

The Llanelli-based creator has been creating TikToks since 2019, and now has just under 700,000 followers.

“When I first went viral, I loved it, my notifications were popping off. It was a lovely feeling,” he said.

“You try not to get caught up in numbers but it’s a fun feeling when it happens. Its the polar opposite then when the numbers aren’t coming in.

“You try not to get sucked in, but you do. You look at the numbers and you’re obsessed with it.

“I think my best way of handling it, is I just don’t look at my notifications because it will mess with my mental health if I do.”

Mr Morris, who’s TikTok page is called “dheanasaur”, said he believed the success of TikTok in Wales was due to the Welsh creators’ “fantastic personalities”.

“The Welsh humour and the Welsh way of living is incredible and I genuinely think it’s just the personalities of the Welsh people coming through,” he said.

Laura Orgill, 28, posts videos of her daily life with her girlfriend at their home in Rhondda Cynon Taf.

Ms Orgill got into TikTok during the pandemic and agreed that the popularity of the platform was down to Welsh user’s “unique personalities”, “and doing everything for the banter”.

“We absolutely love a good laugh and if that includes doing silly TikTok dances we are all for it,” she said.

“Also, I believe it’s because it opens up opportunities for everyday people like it did for me and it inspires the younger generation to be more creative and to put themselves out there.”