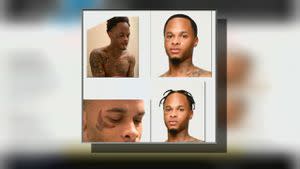 Two more victims of a gang suspected in at least 15 home invasions or burglaries, some involving celebrities, are speaking out.

Channel 2 Investigative Reporter Mark Winne was in Sandy Springs, where he broke the story on Tuesday.

Winne spoke to two victims Wednesday, a man and a woman who didn’t want to be identified.

The woman said the effects of the members of this gang hitting her home months ago still haunts her.

“I’m scared to open my blinds, because I feel like somebody might be in the woods watching and waiting and preying on me,” she said.

The man said that that as a father and a protector, it’s especially troublesome.

“As a man, to have had my safe haven broken into where my partner, my family, my children lay their head (is troubling,” he said.

The couple lost possessions totaling six figures when their home was broken into six months ago. Police now believe the robbery was tied to a gang that has hit at least 15 homes in the form of both burglaries and home invasions in Sandy Springs alone.

Sandy Springs Police Sgt. Matt McGinnis said police took down four alleged members of the gang Sunday morning as they attempted a home invasion at a townhouse that police staked out based on leads picked up during the course of the investigation. As of Wednesday afternoon, the four were charged in connection with the Sunday incident, but detectives are looking to see if they could be involved in others.

McGinnis said those were not the first arrests of alleged associates of the gang, and likely, not the last.

“We’re continuing to look into and investigate these cases, even the older ones, because we want to see justice for the victims,” McGinnis said.

McGinnis said police believe the gang selected many of its victims through social media posts that suggest affluence.

The victim Winne spoke to Wednesday said he believes posts of his belongings on social media made him a target.

Winne spoke with Real Housewives of Atlanta start Marlo Hampton on Tuesday about an attempted burglary at her home.

“I want everyone to be aware if you are posting if you do have luxury items, be careful,” Hampton said. “I just thank God that we’re covered in the blood of Jesus and I’m here to share this story with you.”

McGinnis said that as of late afternoon Wednesday, police were still hoping someone would call 911 with the whereabouts of Jeremy Caldwell, AKA J-Roc, an alleged ringleader wanted on 33 charges. At least some of those charges involved Sandy Springs home invasions.

Anyone with information on Caldwell’s whereabouts could earn a reward of up to $12,000.

Fulton County District Attorney Fani Willis said prosecutors and investigators in her gang unit are working with Sandy Springs Police to prepare the cases of indictment.