It’s been in testing for some time, and available to selected for the past few weeks. But now, Twitter is launching a broader roll out of its new Spaces tab in the app, which will help to improve Spaces discovery by highlighting in-progress audio broadcasts in the app.

we’re working on making it easier to find and join Spaces you love. today starts the rollout of the Spaces Tab to more people in English and iOS first, with other languages and Android coming in the future!

if you have access, let us know what you think pic.twitter.com/MatEDXv01F

As you can see in this example, the new Spaces tab will showcase live audio broadcasts, with the listings attuned to your interests, based on people and topics you follow in the app (Twitter also added topic tags for Spaces recently). That could get more people tuning in, with the capacity to check in at any time and see what Spaces are happening on the topics that you care about.

Though discovery remains difficult. Twitter’s topic matching thus far hasn’t been a major hit, and the fact that Spaces is open to almost all users means that there are a lot of Spaces broadcasts happening all the time, and many of them are likely not of major interest. If Twitter really wants to win out with Spaces, it needs to ensure that it’s highlighting the best, most relevant Spaces to each user, every time they tap on the tab – but then again, the very existence of the tab is a significant step either way, and will provide another way into the Spaces experience.

Which has been non-existent till now. I mean, you can search for “filter:spaces” and get a listing of all the Spaces broadcasts at any given time, but the tab provides a much more controlled, improved discovery experience for the option, which should get more users tuning in.

Though it does also add another tab to your bottom of feed function bar, with users now also seeing the Communities tab appear, adding more direct connection (and a bit of a misalignment in this announcement for those with both)

More tabs is probably not really a problem, but Twitter has been hesitant to add more function buttons to the bottom bar in the past, and that could relate to usage trends, and risks in adding more clutter in the app.

Overall, though, it seems like a good addition – while Twitter’s also looking to add another Spaces discovery element through DM invites when you begin a Space. 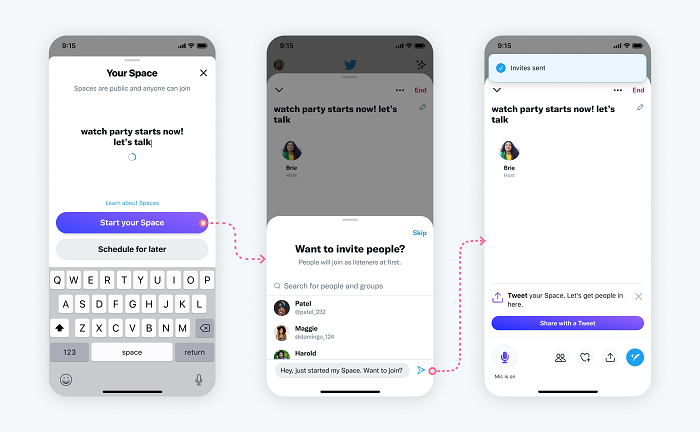 It’s still too early to tell whether Spaces will become a bigger element of the tweet experience, or whether audio social more broadly will remain a valuable engagement option over time. A lot of the initial hype, sparked by Clubhouse, now seems to have tempered, though interest still remains, with Clubhouse recently reporting that it’s now hosting some 700k rooms in the app every day.

It does appear to have a place in the broader social media ecosystem, and as such, this could end up being a significant step for Twitter, as it looks to maximize engagement with the option.

The new Spaces tab is being rolled out to English-language users on iOS, while the new invite via DM option is also coming to iOS first, with Android to follow for both.