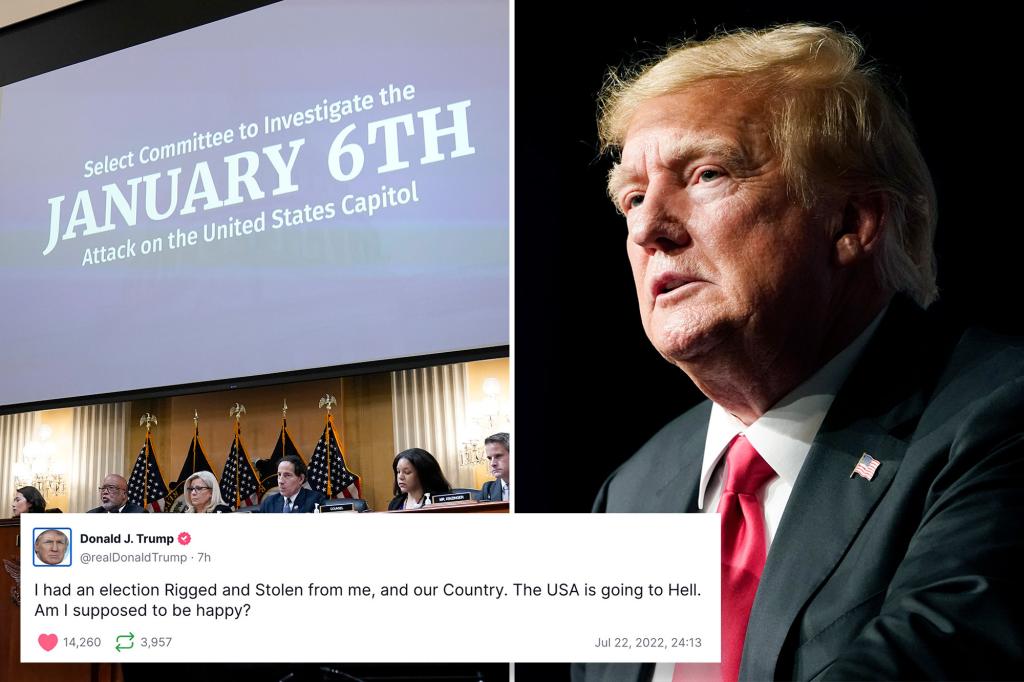 Former President Donald Trump raged on his social media site Truth Social after Thursday’s hearing by the House select committee investigating last year’s Capitol riot, saying at one point that “the USA is going to hell.”

While the committee highlighted the 45th president’s inaction for more than three hours as his supporters laid siege to Congress on Jan. 6, 2021, Trump accused the panel of spreading “lies.”

“The Unselects are embarrassed by their ‘performance’ tonight!” the former president wrote shortly after the primetime hearing was adjourned.

Throughout his posts, Trump repeated his frequent claim that House Speaker Nancy Pelosi (D-Calif.) had turned down his offer to send 10,000 National Guard troops to Washington ahead of the riot, and asked why the “unselect committee” — his moniker for the panel — hadn’t addressed the issue.

Apart from Trump’s word, there is no evidence that such an offer of or request for troops was made by the White House.

“The Unselect Committee refuses to do this because it ends their fake case,” Trump wrote. “Will there be any mention or study by the Unselects of how the Election was Rigged and Stolen? There is sooo much evidence, but the Unselects don’t want it seen in any way, shape, or form – and for good reason – it would ruin their latest Scam!”

“It’s Nancy Pelosi’s fault, she turned down the troops! Perhaps she was disengaged – maybe looking for her husband!” he said in another post.

“But wasn’t this the same Sarah Matthews, who I don’t know, that said such nice things about me on January 20th – or long after January 6th?” he wrote, referring to a tweet by Matthews on Trump’s last day in office, in which she said: “Thank you President Trump and Vice President Pence for your service to the American people. It was the greatest honor and privilege of my life to serve this great nation.”

During the hearing, however, Matthews said she resolved to resign her post on Jan. 6 after Trump tweeted that then-Vice President Mike Pence “did not have the courage” to stop the certification of Joe Biden’s election win — which the former White House spokesman said was “pouring gasoline on the fire and making it [the riot] much worse.”

Trump also attempted to play down video evidence produced by the committee that showed Senate Minority Leader Mitch McConnell (R-Ky.) working with Senate Majority Leader Chuck Schumer (D-NY) and the Pentagon to clear the building, as well as House Minority Leader Kevin McCarthy (R-Calif.) saying Trump admitted he bore responsibility for what happened during the riot.

“Is this the same Mitch McConnell who was losing big in Kentucky, and came to the White House to BEG me for an Endorsement and help? Without me he would have lost in a landslide,” Trump wrote. “A disloyal sleaze bag!”

He continued: “1. But Crooked Hillary Clinton, Stacey Abrams, and many others, contested their Elections – and for a far longer time than I. 2. How do they know I watched on T.V.?  3. I never said that to Kevin McCarthy, who came to Mar-a-Lago to say ‘hi’ very early on (the Unselects don’t say this),” he wrote in another attack. “So many lies and misrepresentations by the corrupt and highly partisan Unselect Committee!”

Trump then rounded on committee vice chair Liz Cheney (R-Wyo.), whom he called “a sanctimonious loser.”

“The Great State of Wyoming is wise to her,” he said. “Why not show the tapes, or interview, those that, with evidence, challenge the election?”

Throughout this summer’s series of hearings, Trump has repeatedly blasted the proceedings and witnesses, most notably former White House aide Cassidy Hutchinson.

Start your day with all you need to know

During her testimony, Hutchinson alleged that the former president threw food at a wall in the White House after then-Attorney General Bill Barr said in December 2020 that the Department of Justice had found no evidence of massive voter fraud. She also claimed that Trump attempted to overpower his Secret Service detail and drive himself to the Capitol to join his supporters on Jan. 6.

“Why haven’t the Unselects asked for Secret Service corroboration of the so-called ‘choke hold?’ Because they know the answer, and don’t like it,” he said. “A Kangaroo Court!”

Thursday’s hearing also featured outtakes of a speech Trump gave the day after the riot, in which he refused to say the 2020 presidential election was over.

“This election is now over,” Trump says in the video. “Congress has certified the results.”

In response to the hearing, Trump continued to insist that the 2020 presidential election was rigged against him, saying, “I had an election Rigged and Stolen from me, and our Country. The USA is going to Hell. Am I supposed to be happy?”