SHIB/USD remains within a bearish stance, and the speculative asset is within sight of important support which may be causing speculative nervousness to grow.

Shiba Inu has been celebrated by many cryptocurrency traders in the past year as a place to speculate on the positive sentiment surrounding the broad digital asset landscape. Shiba Inu has been able to steal a lot of the spotlight away from another speculative cryptocurrency, Dogecoin. However, the fractionally traded SHIB/USD has begun to see some of its shine decrease in the past few months. SHIB/USD is within a definite bearish cycle and it is finding it difficult to escape its downward grasp.

Shiba Inu is a pure speculative wager based on the notion by its buyers the cryptocurrency will go up in value and they will make money from its movement. Shiba Inu has not presented a business model for its coin that proves there is any utilitarian need. Simply said, buying SHIB/USD is a bit like going to a casino and hoping others believe enough in the cryptocurrency market and want to show their optimism by purchasing Shiba Inu.

SHIB/USD has continued to face headwinds in recent short term trading, and its inability to sustain values above low hanging resistance levels looks troubling. As the broad cryptocurrency market fails to find positive momentum, SHIB/USD has certainly suffered from the headwinds created as buyers have become harder to find in the past month. Yes, reversals higher certainly are seen via SHIB/USD, but support levels continue to prove rather vulnerable. The inability to create a violent move upwards and sustain value for Shiba Inu may be causing speculators to look elsewhere for their wagers.

SHIB/USD is hovering under the 0.00003300 value and resistance has proven rather strong the past handful of days. It is important for traders to understand the fractional nature of SHIB/USD; small moves via its pip ratios make any trade extremely volatile depending on the amount of leverage being used to place a wager. If SHIB/USD continues to trend down and the 0.00003250 mark fails to hold as support, there is reason to suspect the cryptocurrency may face a strong test downwards.

SHIB/USD is purely speculative. Traders who decide to speculate on SHIB/USD must use entry level orders and have their stop loss and take profit targets entered as soon as possible to guard against potentially wild moves. However, the bearish trend in Shiba Inu remains strong and has been demonstrated rather well. Traders who want to sell SHIB/USD and look for more downside price action cannot be faulted as they wager. 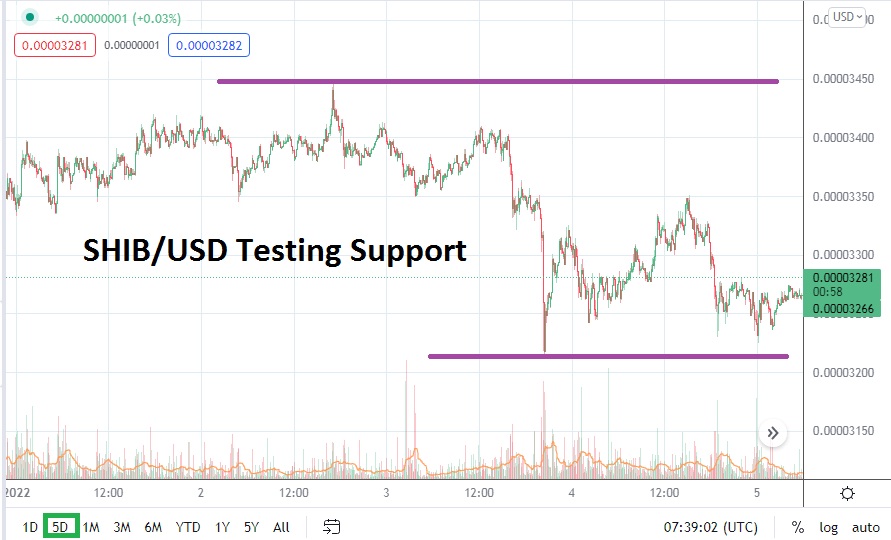