Cardano has seen a sudden spike emerge in trading this morning and it is testing short-term highs as volatility has flourished.

ADA/USD has been trading within a rather tranquil range since October and, as of this morning, the cryptocurrency was near the 2.140000 vicinity. Technical traders who have been watching Cardano and wondering why it has not been correlating to the vast moves made by its major counterpart Bitcoin have likely been scratching their heads the past week. However, in the blink of an eye the past hour, ADA/USD has suddenly spiked higher and is near the 2.310000 mark as of this writing.

Fast conditions have emerged in ADA/USD and traders will have to monitor the cryptocurrency carefully and use entry orders to make sure they get price fills that meet their expectations. ADA/USD in the past hour of trading has gone from a lower position via its short-term chart to a value in which early October high prices are suddenly being challenged.

While Bitcoin has been enjoying a steady bullish trend the past week, ADA/USD seemingly did not react to the flurry of its major counterpart, neither have other major cryptocurrencies. However, in the past hour, volatility has certainly been spurred on, and it appears buying momentum has emerged. An important resistance level which is within sight is near the 2.330000 mark. If this juncture can be punctured higher ,it may ignite a test of values seen late September when ADA/USD was able to climb to a high of nearly 2.450000.

On September 2nd, ADA/USD was trading above the 3 USD mark for a brief moment in time. This was an all-time record price for Cardano. Traders should not get overly greedy right now. However, if ADA/USD suddenly starts to correlate to the positive technical momentum in Bitcoin, Cardano could potentially have further room to traverse higher. Current resistance levels between the 2.340000 to 2.380000 levels are important, but if they are punctured higher, a quick test of the short-term high seen on the 25th of September could materialize.

Traders who decide to speculate on upside momentum should practice solid risk-taking tactics. Reversals remain a danger in ADA/USD and while the bullish move this morning has been noteworthy, speculators must guard against the potential of a downturn if traders try to cash out their profits in mass. ADA/USD looks like a potentially worthwhile speculative wager, but cautious traders may want to wait for slight reversals lower to try and ignite their buying positions. 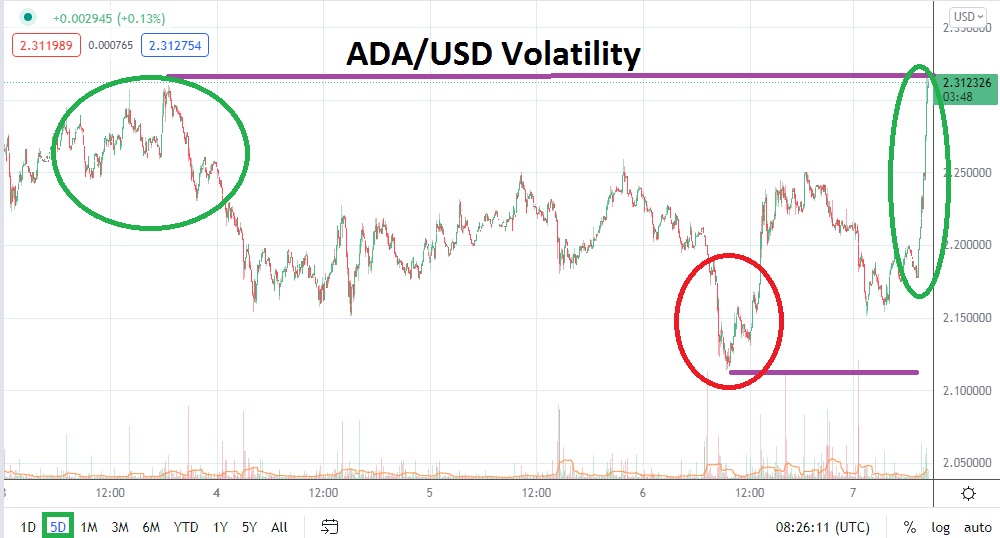