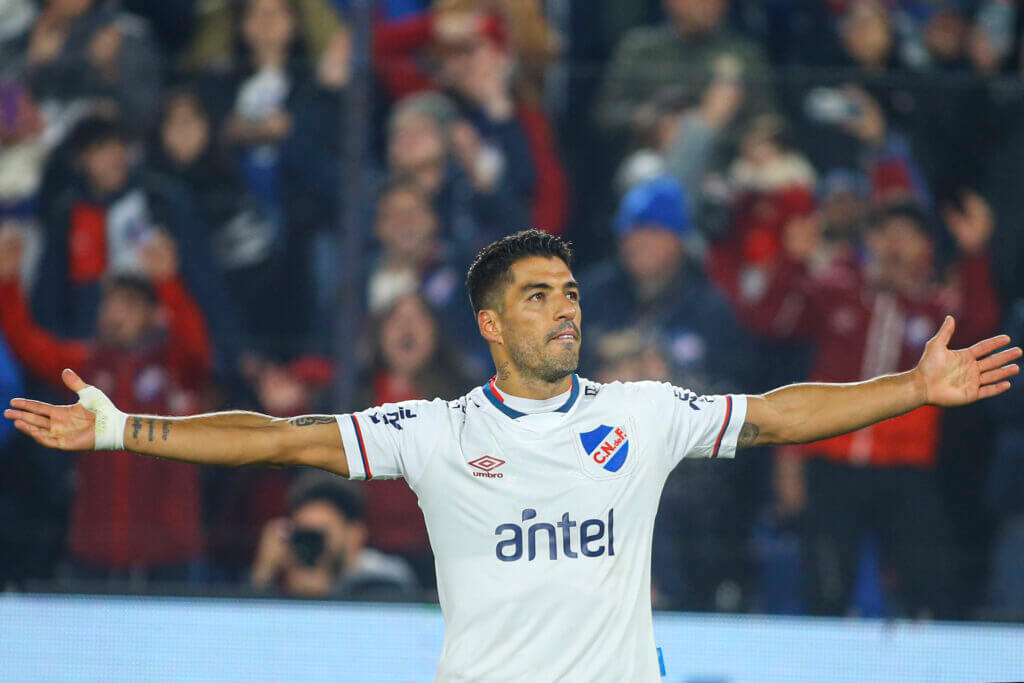 When Luis Suárez signed with Club Nacional de Uruguay, it ended a weeks-long transfer saga that epitomized the influence that social media can have on modern football. Suárez’s return to Nacional, after playing at the highest level in Europe for 17 years, was sparked by a viral social media campaign on Twitter.

Nacional is where Suárez started his playing career. The Montevideo-based club is one of Uruguay’s most celebrated institutions, a football factory that has traditionally challenged rivals Peñarol as the country’s top talent-producer. Sebastian Abreu and Álvaro Recoba are among the most recognizable names in Nacional’s more recent lore, but Suárez is the club’s golden boy.

At 35 years old and without a team, Suárez expected a call from his boyhood club, but his phone didn’t ring — this despite openly campaigning his services as a high profile free agent.

“I’m surprised that the Nacional front office didn’t even call me to discuss my situation,” said a disgruntled Suárez during an interview with ESPN Argentina in July.

Suárez was dropped by Atlético Madrid after two seasons in which he scored 32 goals in 67 matches. He was an inspirational leader for Los Colchoneros during the club’s 2021 La Liga title campaign, scoring 21 goals that season and finishing fourth in the Pichichi race behind Leo Messi, Karim Benzema, and Gerard Moreno of Villareal. It was sweet vindication for fiery No. 9 after being shown the door at Barcelona a year prior.

Suárez had proven that he was still a reliable goalscorer in Europe, but his 11-goal output last season would be his last under Diego Simeone.

The ESPN Argentina interview set off a snowball effect. Peeved by the apparent inaction of Nacional’s sporting department, Nacional’s supporters took matters into their own hands. The hashtag #SuarezANacional quickly proliferated on Twitter. Fans changed their profile avatars to one that featured a silhouetted Suárez in a Nacional kit.

The doctored photo made Suárez look like a revolutionary figure and a symbol of Nacional supporters’ angst toward the club’s lack of initiative. Nacional’s official Twitter account could no longer ignore the worldwide phenomenon. Nacional has a modest 367,000 followers on Twitter, but according to the club, over 50 million accounts in 35 countries tweeted #SuarezANacional an average of 1,500 times an hour.

Lara Carballo, Nacional’s marketing director, described to Argentine outlet Olé just how quickly everything materialized. Suárez’s interview with ESPN took place on July 18. Eight days later, Suárez confirmed on social media that he had a pre-contract agreement with Nacional. In Uruguay, Suárez’s signing is being hailed as the biggest free transfer in the country’s history.

“I truly believe that there isn’t a (marketing team) that’s prepared to react to the signing of a global superstar, especially in Uruguay and throughout South America,” Carballo said. “I’m convinced of that. I spoke to my colleagues at Atlético Madrid and they weren’t prepared when (Suárez) arrived there, either.”

Suárez was very close to joining River Plate in Argentina. After Atlético Madrid let him walk, his objective was to join a competitive club that was fighting for a title and playing at a high level. With Liverpool’s Darwin Nuñez and Edison Cavani in good form, Suárez’s place in Uruguay’s World Cup squad is not guaranteed, so quality minutes and visibility were paramount to his quest to reach Qatar.

When River were eliminated in the Copa Libertadores round of 16, the deal to play for Marcelo Gallardo fell through. River Plate then signed Colombian center forward Miguel Borja. A move to MLS before the World Cup was an option for Suárez, but the risks involved were apparently enough to deter him.

Suárez told Uruguay’s Radio Sport 890 in July that he had entertained “five or six” MLS offers. There was reported interest from D.C. United, who are rebuilding under new manager Wayne Rooney, but D.C. is in last place in MLS’ Eastern Conference, which was a deal breaker for Suárez, as missing the MLS Cup playoffs would mean a substantial layoff before the World Cup in late November.

“The thing is, some of these opportunities are January moves, I have to analyze it all,” Suárez said. “The MLS market is very complex. Some clubs want you, but they don’t have the (roster) spots. Other clubs want me right now, but I have to see if they’re going to make the playoffs. I’m not closing the door on anybody and I’ve listened to these offers. But if some MLS teams don’t qualify for the playoffs, their season will end the first week of October, and that doesn’t work for me because I’d have to stop playing one month before the World Cup. That wouldn’t be a good thing for me.”

The Athletic reported that the Seattle Sounders, who already have three designated players, own Suárez’s discovery rights. Despite speculation that an MLS club was close to acquiring Suárez, nothing materialized. But on Thursday, Sounders head coach Brian Schmetzer confirmed that his club had seriously discussed signing Suárez.

“Oh yeah. Those were rumors that were floating around that were true,” Schmetzer said. “Yeah. I mean, we would have loved to have Luis.”

With conjecture about his future dominating the press, Suárez posted a video on his social media channels on July 26 that brought the saga to an end.

“First of all, I want to thank everyone for the love that myself and my family have received in the last few days,” he said. “It’s been incredible and emotional, all of the videos and messages that we’ve received. That really touched our hearts at a time when we had to make a decision.”

In the end, Suárez got the deal that he had prioritized. Nacional were recently crowned champions of Uruguay’s Torneo Intermedio, so he joins a competitive side in top form and will play in close proximity to Uruguay national team manager Diego Alonso.

Throughout the process, the fans’ guerrilla marketing campaign continued. The hashtag had taken on a life of its own and Súarez to Nacional had become a global trending topic. There was no additional budget to work with, so all Carballo’s team could do was ride the wave.

“We spent four to five days sleeping with one eye open,” Carballo told Olé. “We didn’t know what day (the signing) would become official. It was very intense. But for anyone who works in marketing and communications, it was a nice challenge. The reality is that things can change overnight and that’s what happened. We all found out about Suarez’s video confirmation at that very moment.”

Since then, Suárez has been the protagonist of Nacional’s social media content. When he signed his contract, he was flanked by Nacional president José Fuentes and another club executive, who raised Suárez’s arms in triumph like he was a prize fighter. They did what the fans had hoped for, but surely Nacional’s executives understood how commercially successful Suárez’s return could be.

Fans packed Nacional’s Estadio Gran Parque Central for Suárez’s introduction, a hero’s welcome for the club’s new idol. Uruguayan television broadcast the event live for five hours. Carballo said that Suárez’s signing resulted in 5,000 new club members, a number that continues to grow. Additionally, over 700 premium seats were purchased at Nacional’s home ground. “We had to stop offering those seats. They’re sold out,” she said.

Suárez No. 9 shirt is also in high demand. Carballo said that the jersey has nearly sold out at the club’s brick and mortar stores, and that the manufacturer in China has prioritized Nacional deliverables for the time being.

“We haven’t been able to sit down and itemize everything, or establish performance metrics because all of this took place within four days,” Carballo said. “It was a whirlwind, but internally, yes, there is an economic objective that Nacional wants to accomplish. Personally, I believe this is an ideal time (for us) to truly take off. We have four months and every day will count.”

Suárez has single-handedly changed the club’s marketing strategy and reinvigorated the entire organization. As a lifelong Nacional supporter and a 10-year club employee, Carballo called the events that brought Súarez back to Nacional “a dream,” and that she was left speechless when she attempted to describe her emotions.

Football in Uruguay, despite the country’s small population, is extremely polarizing. Nacional and rivals Peñarol essentially divide the country in two. For now, Nacional has gained the upper hand, both in the standings and in nostalgia, an ever-present sentiment in South American football.

“If you were to ask me what the peak would be for this club, I would’ve told you that it was Suárez coming back,” Carballo confessed to Olé. “To us, he’s the best Uruguayan player of all time. And from a marketing standpoint, it was the most profitable (event) for all of us. We want to reposition Nacional where it belongs. Nacional is a three-time South American and world club champion. It’s one of the biggest clubs in the world. Historically, that’s true.”

On Tuesday night, Suárez made his Nacional debut in the first leg of the Copa Sudamericana, a 1-0 loss to Brazilian side Atlético Goianiense before a sellout crowd in Montevideo. Two nights later he scored his first goal for Nacional since he first left the club in 2006.

Luis Suarez scores his first goal back for Nacional. 💥

Suárez followed Chile’s Arturo Vidal and Brazil’s Dani Alves as former Europe-based South American stars who have returned to Latin America. Vidal signed with Flamengo in Brazil while Alves moved to Liga MX side Pumas UNAM. Alves is also hoping to stay fit and in contention for a Brazil World Cup roster spot.

Curiously, Suárez’s deal with Nacional ends in January. In spite of his triumphant return to Uruguay, he is unlikely to end his career there. MLS is not out of the picture, and with Messi’s future set to be determined this winter, one can imagine the two former teammates plotting their reunion on American soil. Until then, Suárez will be instrumental for his new club, on and off the pitch, as the club hopes to reestablish itself as an iconic global football brand.

“Before, if you said ‘I’m Uruguayan’ to people around the world, the response would be ‘Luis Suárez!’ Now it’s Club Nacional de Fútbol, where Luis Suárez plays,” Carballo said.

Suárez’s close friend Sergio Aguero has already jumped on the Nacional bandwagon. Aguero was a special guest of the club on the night that Suárez debuted. The now retired Argentine star snapped photos of the crowd from a stadium suite as he reveled in the atmosphere. In another savvy move by Nacional’s marketing team, Aguero became the club’s ideal spokesperson.

“I’m here to support Nacional,” Aguero said. “Don’t say El Nacional because (Suárez) will get mad. It’s Nacional. Sorry Peñarol supporters. I have a lot of friends from Peñarol but from now on, I’m supporting Luisito Suárez and Nacional.”