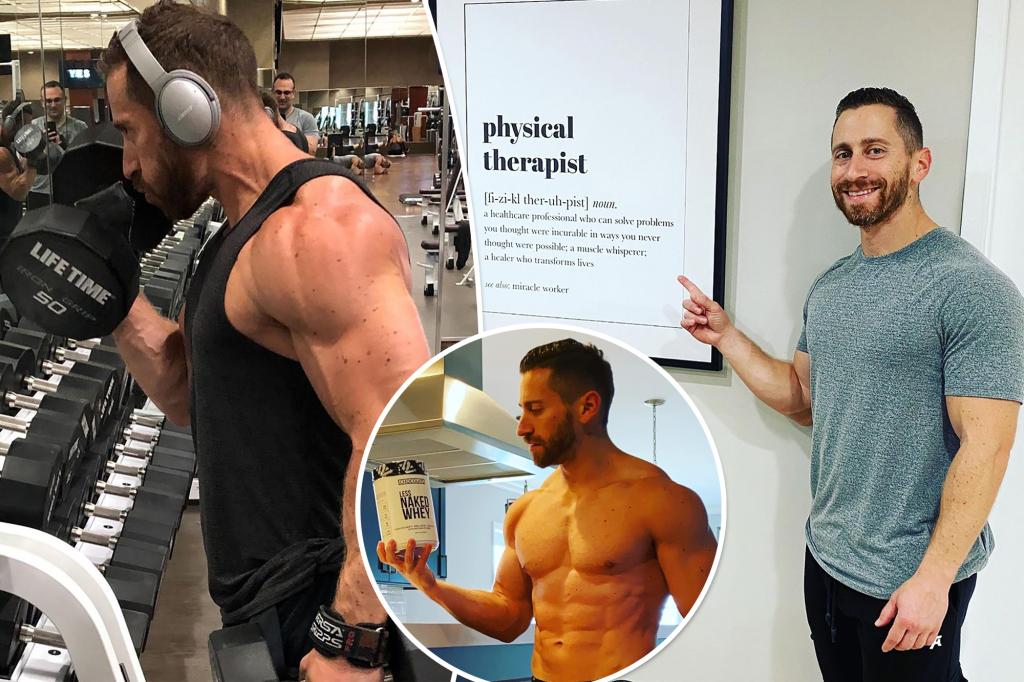 A straight physiotherapist has had his shirtless social media snaps stolen by a scammer who used them to swindle money out of men on the gay sex and dating app Grindr.

Dr. Scott Liptzin — who practices and lives in Hicksville, NY, with his wife and three children — frequently posts photos of himself on his own Instagram page to recruit new clients to his physical therapy business.

But some of the dad’s steamiest shots were recently hijacked by a duplicitous Grindr user known as “Cams” who used to the images to advertise X-rated “happy ending” massages that actually didn’t exist.

“It gets me upset that somebody is copying my material for the wrong reasons,” Liptzin, 40, told Vice, of the kinky catfish scam unwittingly fueled by his “Savage Physio Doc” Insta account.

Posing as the hunky physiotherapist, “Cams” began chatting to his potential victims, luring them into believing that he was authentic. He then “asked them to enter their credit card details on a different website to prepay for a massage that never happens.”

“Cams” charged gullible Grindr users $50 for a 30-minute massage session, $80 for an hour, and $100 for 90 minutes. It’s unclear how many trusting men were duped into paying advance money for massages that never came to be.

In a statement, Grindr said that they “take the privacy and safety of our users extremely seriously. We encourage our users to report improper or illegal behavior either within the app or directly via email . . . and to report criminal allegations to local authorities.”

However, the “Cams” scam isn’t the first time that Liptzin’s musclebound photos have been stolen and used for deceitful purposes.

“It’s crazy,” Liptzin told Vice. “Instagram needs to get a better handle on all of the fake bots. It’s just got so out of control that it’s beyond anything they could do or care about at this point.”

For their part, Instagram’s parent company, Meta, said they have “systems in place that help us catch and remove suspicious activity before it is reported.”

In the first three months of 2022, the company claims they “actioned 1.6 billion fake accounts” that were mostly picked up with the help of artificial-intelligence programs.

But despite the companies’ best attempts to crush catfish scammers, online fraud is still rampant, with tens of thousands duped by users posing as people they’re not.

During the pandemic, cases of love-seeking men and women being duped out of their money by online suitors skyrocketed. In late 2021, the Federal Trade Commission published an updated report on the top scams that have cost seniors ages 60 and up millions of dollars.

Out of the five scam types, reported romance scams were “the highest aggregate dollar losses.” In 2019, American seniors lost around $84 million to online scammers who posed as potential love interests on dating apps. That number rose to $139 million in 2020 — a 65.5% increase in a single year.

“Reported losses to romance scams have increased significantly in recent years, and this trend accelerated during the COVID-19 pandemic,” the FTC continued. “Among older adults, hardest hit were the 60 to 69 and 70 to 79 age groups, which reported $129 million of the 2020 reported losses, making romance scams the category of highest reported losses for both groups.”

The scams are so widespread — and so well-executed — that they were even the subject of a recent episode of the National Geographic series “Trafficked With Mariana van Zeller.”

“A lot of my clients have come through the massage work content I post. That’s how I create a lot of business,” he said. “It obviously works.”