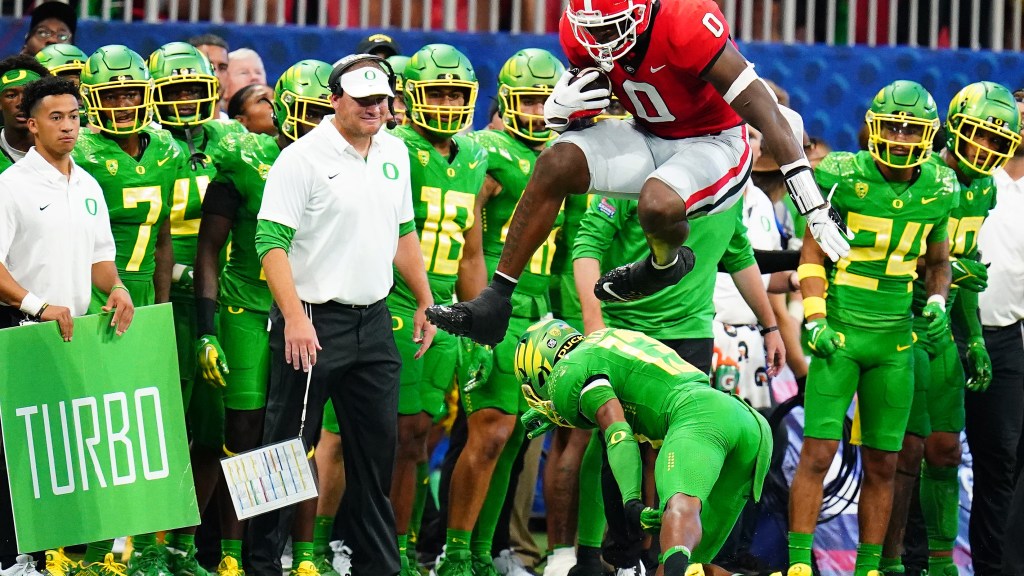 Well, that didn’t quite go as planned…

The Oregon Ducks were fired up for the start of the season on Saturday, getting a chance to go up against the defending national champion Georgia Bulldogs in one of the biggest games of the weekend.

It was competitive for all of may 20 minutes of actual time?

Georgia quickly built a lead, and thanks to a couple of costly turnovers from Ducks’ QB Bo Nix, Oregon was unable to answer. Any positive momentum that was accrued in the first quarter quickly vanished, and the route was on.

By the middle of the third quarter, Georgia was pulling its starters and giving their depth a chance to play. The game was over, and everyone just waited for the clock to run out.

That gave the internet some time to shine. Here are some of the best (and worst, for Oregon fans) reactions to the blowout:

Georgia is a much better team than Oregon. They were yesterday, they are today, they will be tomorrow. Not much more to it.

I don’t blame players or coaches in game one of a new tenure against an opponent like this. Dawgs should be fun this year.

There’s like two…MAYBE three teams that can physically hang with Georgia and I don’t think Oregon is one of them. https://t.co/1E24EWcuZY

Mario Cristobal last year when he looked ahead to Oregon opening against Georgia (and saw an opportunity at UM). pic.twitter.com/rLWFso5zVd

In an ever changing 🌎 it’s so refreshing to know you can always count on Oregon gettin stomped by the SEC.

Glass half full: Oregon is facing the best collection of talent it will all season in the first game. Things can only get better.

Glass half empty: Oregon’s head coach is defensive-minded and the defense has not looked competitive in this game.

I know a lot will deservedly be made of the way that Georgia recruits, but Oregon ranks No. 7 in the 247Sports Talent Composite, ahead of LSU, OU, Michigan and Florida.

What sets Alabama, Ohio State and Georgia apart is what they *do* with the talent they get. Elite development.

Georgia by the Numbers

Georgia is the 3rd team in the past 15 seasons to score a touchdown on each of its first six drives against a ranked opponent, joining Ohio State vs Michigan State last season (first seven) and South Florida vs Navy in 2016 (first six). pic.twitter.com/ARholIUOKj

Pulling Your Starter in the 3rd Quarter

Stetson Bennett’s day is over with 19:22 to play. What a pathetic performance for Oregon’s defense.

Bo Nix is out here throwing hospital balls now against an NFL team.