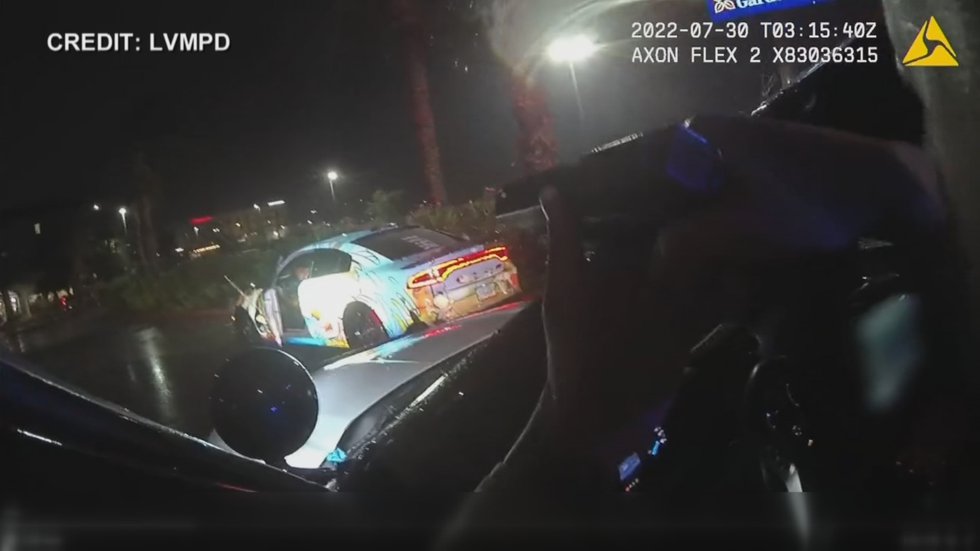 LAS VEGAS, Nev. (FOX5) – If you come to Las Vegas to break the law, you will be held accountable even if you are a social media star. That is the message from LVMPD.

Metro officers arrested social media personality Graham Liberal, who has millions of views on his car videos, after a tip about a car meet-up.

Metro says he came in from Miami and organized a car meet-up on South Las Vegas Boulevard near Pebble. Days later, evidence of burnouts and doughnuts, marks from tires are left behind in a parking lot.

On Friday night, undercover police were watching the trick driving in the pouring rain. An officer’s body camera video captured his arrest. An officer ordered him out of the car at gunpoint. Liberal and another man in the car were cuffed and an officer is heard explaining why they are under arrest.

“We can’t have you guys putting people at risk in the streets like this man,” the officer added.

Liberal has videos with tens of thousands of views and one video with 9.5 million.

LVMPD’s Racing Apprehension and Intervention Detail, or RAID, also posted online about the arrest saying “all visitors are welcome in Vegas but if you choose to make your visit about promoting illegal activity, we promise you, R.A.I.D. will find you.”

Since Metro says Liberal promoted the event beforehand on social media, Liberal is now facing charges of participating or organizing a speed contest.

You can email the team directly here.

Metro asks you to send tips along with videos or pictures and the RAID squad will investigate.