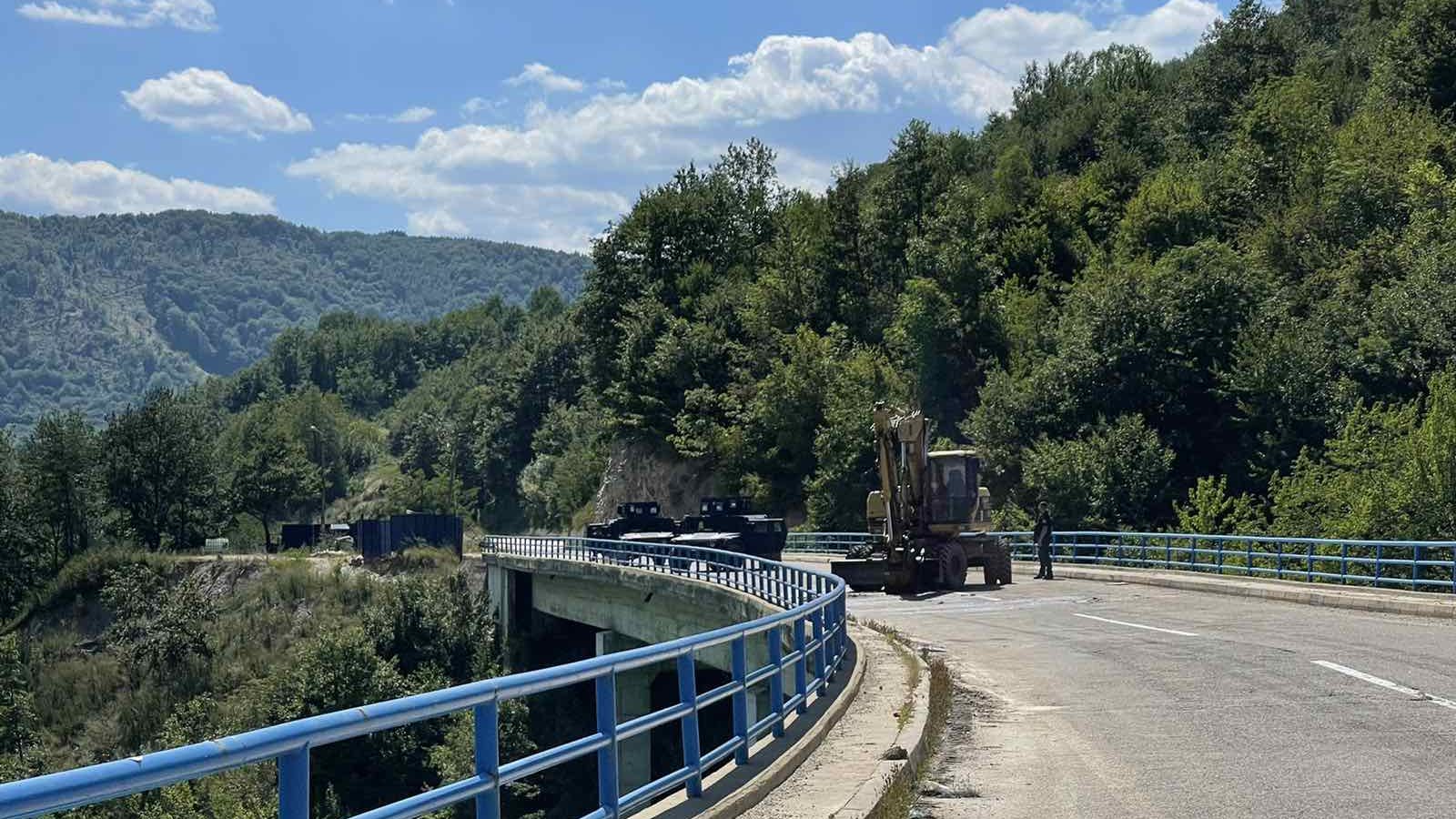 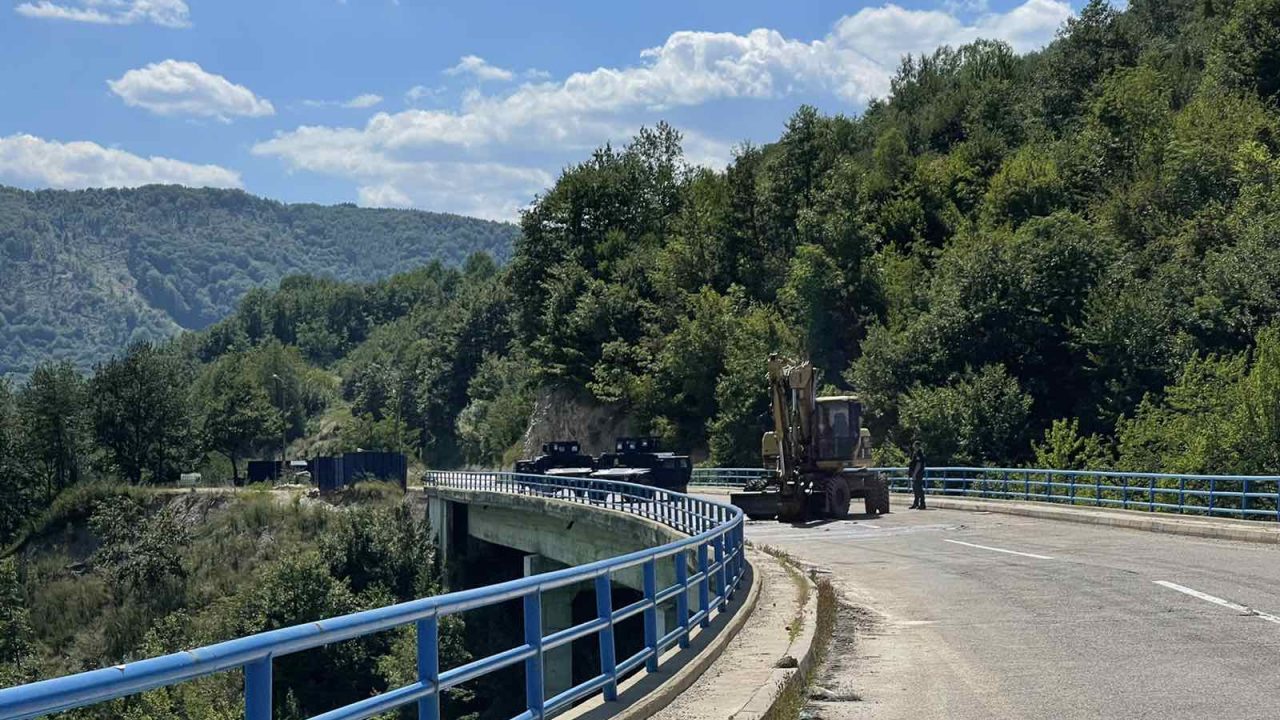 An excavator remains at a barricade at the bridge over Ujam/Gazivode lake in the road leading to Bernjak crossing point on August 1, 2022. Photo: Adelina Ahmeti/BIRN

While Kosovo Serb barricades blocking roads to two border crossing points to the border with Serbia are being removed, disinformation about the conflict is spreading on social media and several media platforms worldwide.

Kosovo is currently trending on Twitter with over 250,000 tweets.

Twitter users, mainly from Ukraine, Russia, Turkey, Spain, Serbia, Kosovo, and Albania, are all sharing disinformation of an alleged “war” that has broken out between Kosovo and Serbia or sharing propaganda against Kosovo’s independence from Serbia, declared in 2008.

Ukrainian MP Oleksiy Goncharenko’s tweets on Sunday received thousands of likes, retweets, and comments after he wrote: “Ukraine is ready to act with our troops on the ground. Serbia is trying to start an aggressive war.”

In fact, the NATO-led peace-keeping mission in Kosovo, KFOR, on the grounds 1999, has declared its readiness to intervene “if stability is jeopardized in the North of Kosovo”. No Ukrainian troops are on the ground in Kosovo, however. Nor has Ukraine recognized Kosovo’s sovereignty.

If Serbia invades #Kosovo, we should defend the Kosovars. 🇺🇦 is ready to act with our troops on the ground. 🇷🇸 is trying to start an aggressive war. Precisely according to Putin’s method. As I said, #Serbia is Putin’s Trojan horse in Europe. War anywhere in the world is terrible.

“This is an irresponsible and unnecessary comment. And it also raises all sorts of complex questions that I’m not sure Ukraine is ready to answer. If you really believe in peace, don’t become part of the problem in the Balkans. Focus on home” Ker-Lindsay wrote.

They were erected after Kosovo’s government moved to implement so-called reciprocity measures with Serbia over vehicle licence plates and IDs for one month, before agreeing to delay the measures if the barricades are removed.

“Crossing points in Jarinje and Bernjak remain closed,” PM Albin Kurti told media on Monday, adding “all border points are issuing the [new] 90-day exit-entrance document. Up to 1,501 citizens have been provided with this document, waiting 20 seconds”.

The Kosovo government decided in June that every person wanting to cross the state border using personal IDs issued by Serbian authorities will now be issued temporary declaration forms valid for 90 days that replace the Serbian-issued document.

A similar escalation occurred in September 2021, after Kosovo’s government required vehicles with Serbian licence plates to switch to temporary Kosovo-issued ones at the border. Kosovo citizens who have licence plates with the letters RKS, short for Republic of Kosovo, have had to do this for years on the border with Serbia.

Photos from last year are being shared on social media as if they happened on Sunday, On July 31, 2022. Albanian Muslim preacher Elvis Naci with 1.2 million followers on Instagram, shared a photo of Kosovo Special forces moving to the barricades closer to the border from September 2021 captioned: “God protect the Albanians of Kosovo as well as the brave men of the special unit who establish peace and security,” 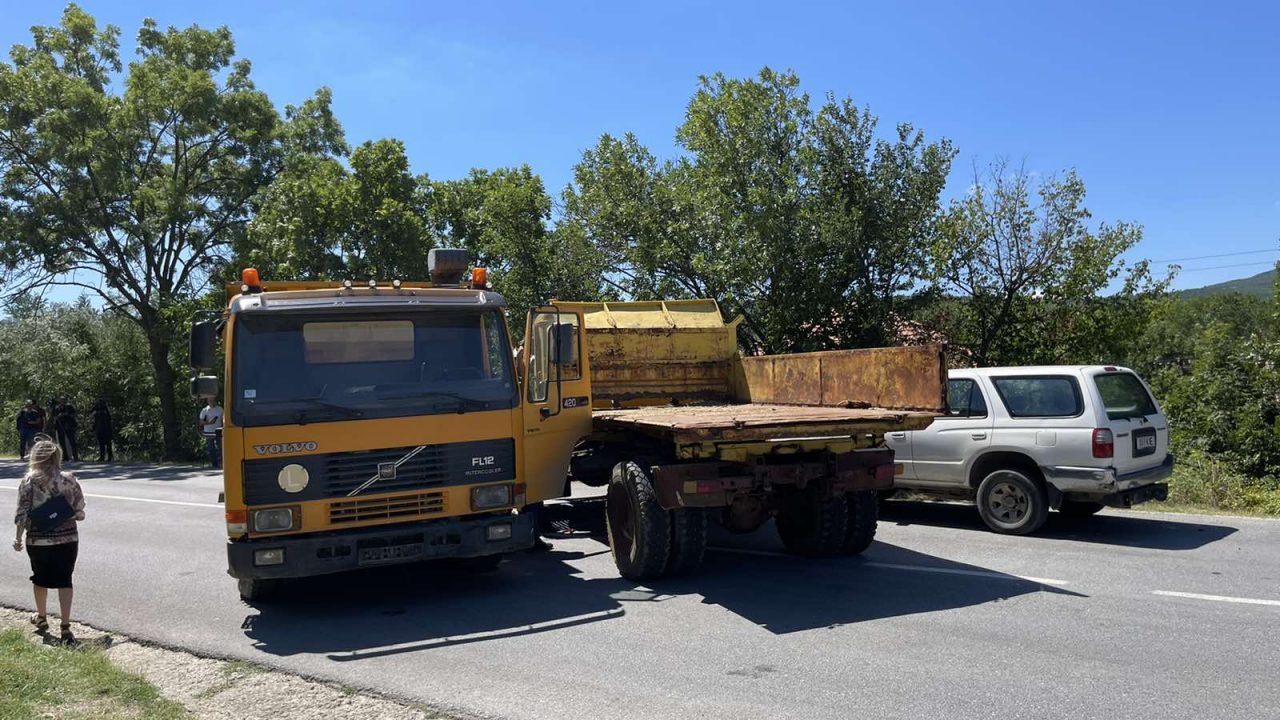 Barricades in the village of Rudar, on the road to Serb-majority Kosovo municipality of Leposavic, close to the border with Serbia, August 1, 2022. Photo: Shkodrane Dakaj/BIRN

Ukrainian MP Goncharenko’s tweet was not the only one suggesting a war already broke out between Kosovo and Serbia.

His tweet, which received over 200 likes and over 80 retweets, claimed that “Kosovo Special Forces sent additional troops to the Jarinje border crossing with Serbia. We are in the period when the war begins to spread to Europe via the BALKANS and to Russia via the CAUCASUS”.

Nebojsa Malic, a Bosnian Serb columnist for Anti-War site, went on Twitter to say that “NATO’s favorite stooge ‘Kosovo’ is trying to start a fight with Serbia right now,” claiming this explained how “well the conflict in Ukraine is going for the West”. His tweet received over 2,000 likes.

Twitter account ConflictTr, with over 200,000 followers, tweeted: “Kosovo soldiers injured in the clashes on the Serbia-Kosovo border are transferred to Mitrovica state hospital”.

Several Kosovo media such as Nacionale and Indeks Online among others reported that a Kosovo police official and two Serbian citizens had been injured by gunfire between police and the citizens that erected the barricades. This was not true. Nacionale later deleted its news.

Kosovo Interior Minister Xhelal Svecla told the media on Monday that “11 citizens have been injured and received the necessary treatment and some citizens’ and police vehicles have been damaged by armed criminal structures”. Kosovo police are investigating.

However, no armed conflict has yet erupted between Kosovo Special Police and Serbian police or military forces.

Twitter user Inga Canarias, with over 1.5 thousand followers, retweeted a photo of a mural that writes “Kosovo is Serbia” with the description in Spanish: “Since there seems to be trouble between Serbia and Kosovo, it will have to be said once again that Kosovo is an integral, inalienable part of Serbia.” Several Spanish accounts shared similar tweets.

Let’s be very clear, the Europeans pushed The Hague to arrest @HashimThaciRKS after 20 years of investigations simply because he was negotiating with Trump.

They have nothing on him and keep him held because of politics. It’s why ICTY should be dissolved.

“Let’s be very clear, the Europeans pushed The Hague to arrest (former President) Hashim Thaci after 20 years of investigations simply because he was negotiating with (Donald) Trump,” he said.

“They have nothing on him and keep him held because of politics. It’s why ICTY (International Criminal Tribunal on Yugoslavia) should be dissolved,” Grenell said in one tweet, which received over 500 likes.