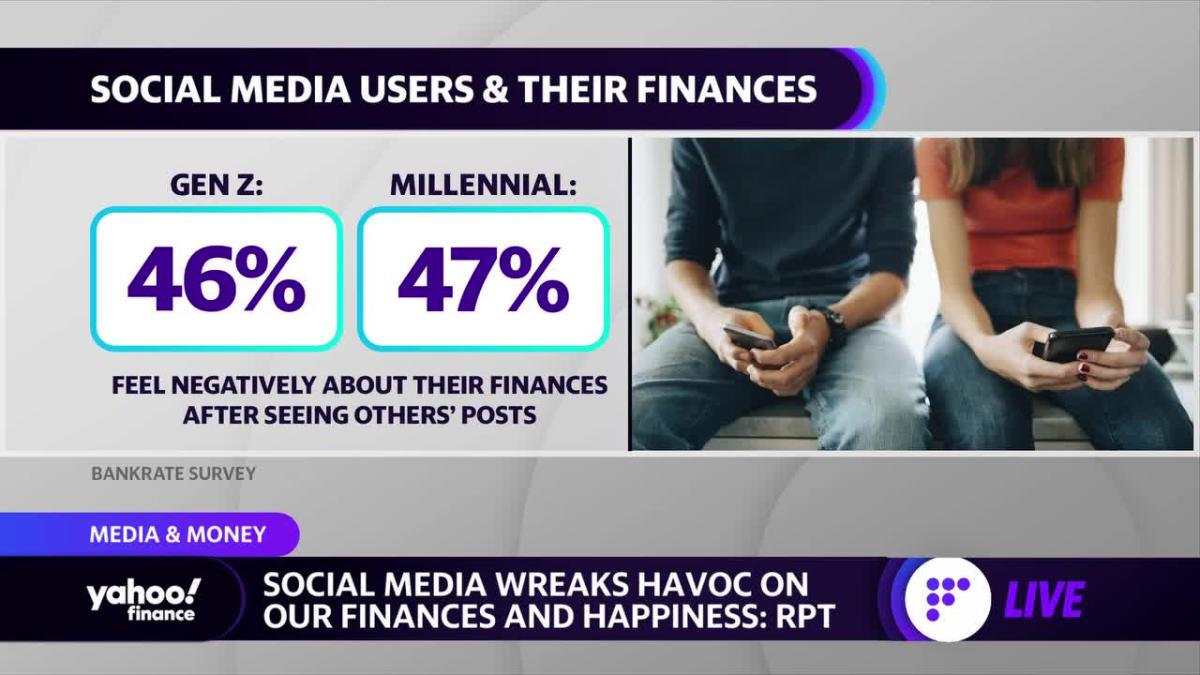 A new Bankrate survey found that social media is a factor in Gen Z and millennials feeling financial uncertainty.

– Social media taking comparison culture to another level. And it’s having an impact on how confident people are feeling about their finances. There’s a new survey out from Bankrate and finds that nearly half of Gen Z and millennial users have felt negatively about their finances from seeing posts by others. Lavish trips, expensive purchases are impacting how kids view money.

And Dave, 64%– this is according to the Bankrate survey– 64% of parents with kids under the age of 18– I know you have three of them– who are on social media think it’s contributed to their kids unrealistic expectations about money. If we take a step back here, we could really apply this to so many different things. Because social media fosters this comparison culture, something that at least I did not have growing up. And it does affect how you think about almost everything, I think, these days.

– Everything across the board dramatically. And it’s all, for the most part, negative. I certainly think it hurts our kids’ perceptions. And it hurts their valuing of a dollar, which most kids these days don’t have any.

But I think when you look deeper into this study, it’s impacting all of us. It’s not just our kids. It is certainly impacting Gen Z and millennials more so.

But even when you look at the number of Gen X, 31% of Gen Xers are impacted negatively by the images they’re seeing on social media. I can attest myself looking at social media and impacting my perception of the world and feeling like I, too, am not succeeding to the likes of which I would prefer based on other people’s posts. So look– those two numbers stand out. But [? Rochelle, ?] this is an issue for all of us.

– I mean, it really is. And it does depend on the lens that you’re looking at this through. Obviously, we saw the lowest number of people who are worrying about their finances based on social media being baby boomers. Well, I think it was about a fifth.

But if you’re younger and you don’t have that lens of really understanding, look, this is not all of people’s real lives. They’re posting a snapshot of their lives. [? Some of ?] [? these is ?] branded content. Some of it’s, you know, not telling the whole story.

But when you’re younger– if you’re very young and you’re not able to understand that and put that context on it, that can be damaging. I mean, they said more than one in three adults who have social media felt worse about their finances after seeing posts, feeling jealous, inadequate, anxious, shame, anger. And this was even more in that Bankrate study. They felt worse about their finances than they did about their attractiveness. And when it’s such a visual platform you have on these social media platforms, I was surprised to see that finances actually make people feel worse than their attractiveness on here.

– Yeah, and the numbers really show a regretting our impulse purchases as well on social media. More than 60% report they felt negative about something they bought and regretted it. Put myself in that category as well.