SAFETY HARBOR, Fla. – A woman from Safety Harbor is living an online nightmare and wants to warn others of a seemingly simple hacking scheme.

It started on Friday when Tiffany Carra got a message from a person she thought was one of her friends. They said they were having issues getting into their email and asked if Tiffany to help.

“I’m having issues getting on my yahoo mail. It requires me to add alternative phone number to get my [login] code. Can you help me get the code in your phone and send it to me as soon as you get it?” the message said.

Tiffany didn’t realize the friend was really a hacker and the code was the final key to her own account.

“I wasn’t doing anything with my phone,” she said. “I saw things disappearing. My phone glitching, so I am like, ‘Oh my God, was I hacked?’”

Indeed, she found herself locked out.

Meanwhile, her friends started getting messages from her accounts asking for money.

The hacker posted social media statuses asking if anyone wanted to buy a puppy. The hacker also tried to log into Instagram from an IP address overseas. 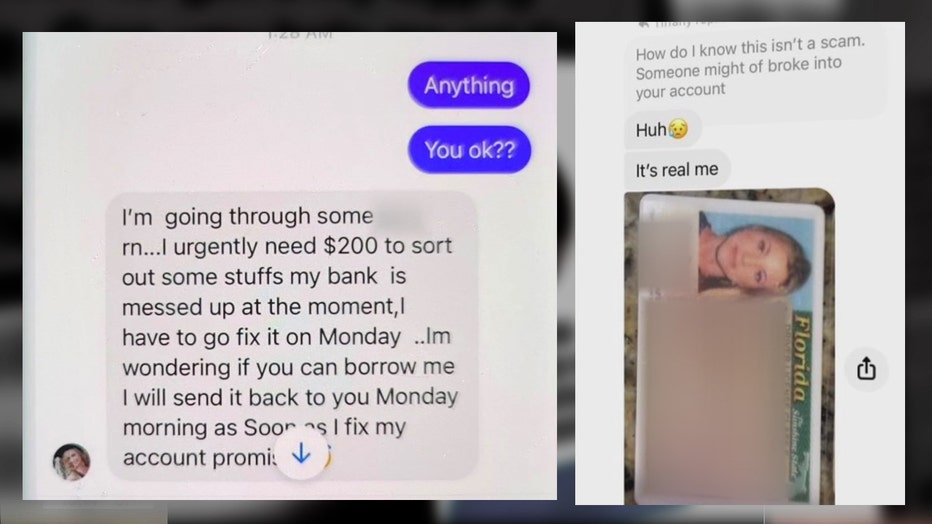 Messages sent by hacker using Tiffany’s accounts to other people, asking for money

From her email account, hackers found a picture of Tiffany’s driver’s license and posted it on a dating site.

“They were trying to scam people for money and giving local, random men my address,” she said. “I feel like I am in danger.”

“It is low-hanging fruit,” said Gary Brickhouse of GuidePoint Security. “In this instance, they are after a little bit of money.”

To protect yourself, make sure to turn on two-factor authentication and use complicated passwords to make it harder for guessing software to get through the first layer.

“It is really about having a good defense,” said Brickhouse.

For now, Tiffany hopes Facebook will finally deactivate her account and that her information can be scrubbed from places where hackers may have posted.

She has spent the last week keeping an eye on her bank accounts and getting new IDs and credit cards.

“I have spent the last week crying. I have been extremely stressed, barely ate, barely slept,” she said.

Experts say catching a hacker in these kinds of cases is rare.