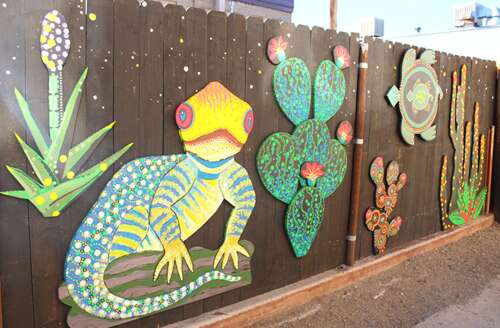 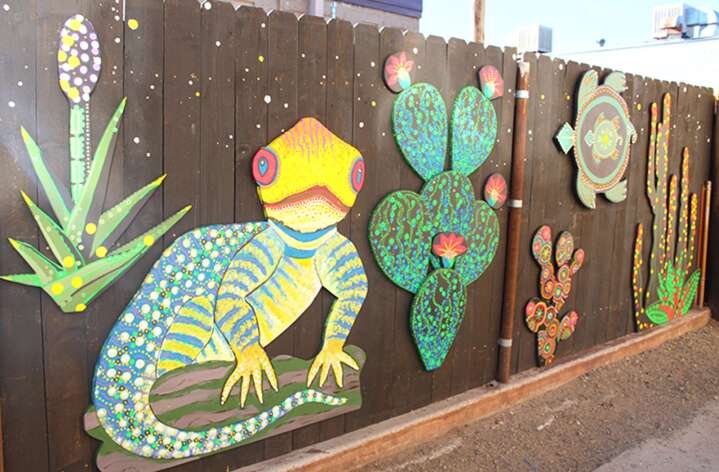 The alley by the Cortez Cultural Center has been spruced up with luminescent artwork. (Jim Mimiaga/The Journal) 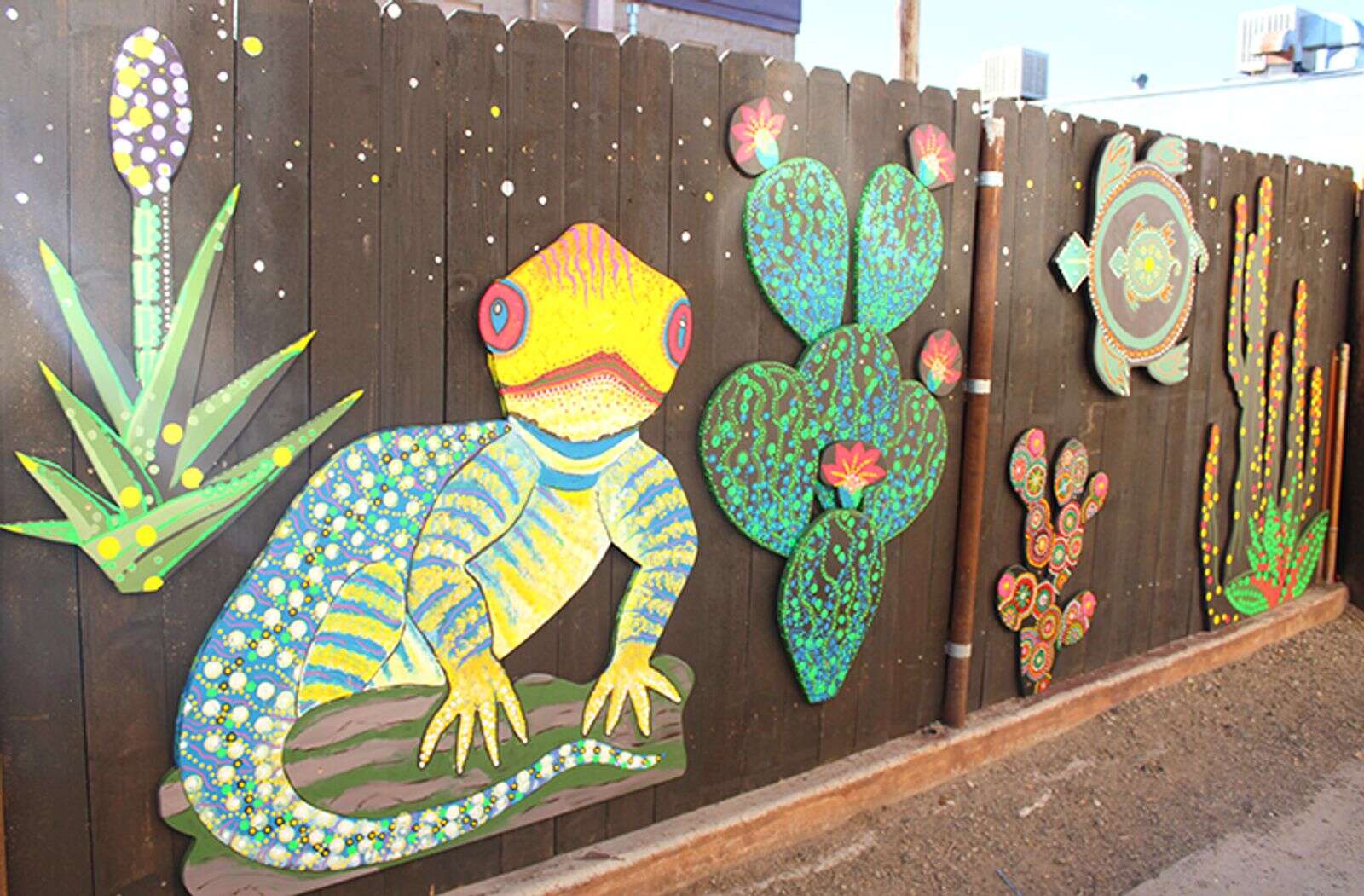 The Rotary Club of Cortez will unveil its first installation of Art in the Alleyways on Saturday, Dec. 3 at 6 p.m. on 25 N. Market St. before and after the annual Four Corners Board of Realtors Parade of Lights.

In a news release, the Club says its Art in the Alleyways project is “meant to help identify Cortez as a community of innovation and vision” along with adding pops of color to local alleyways and supporting local artists and creatives.

The installation, which is hung in the alley between the Loungin’ Lizard and the Cortez Cultural Center, features artwork from more than eight individuals who members of the Rotary Club or will be soon. The Southwest-themed art includes figures painted in glow-in-the-dark paint, making the artwork a nighttime attraction. 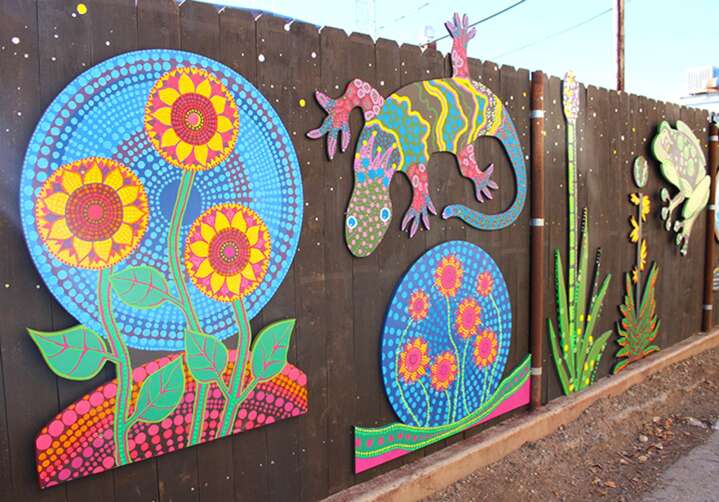 Rotary Club of Cortez started an art project to brighten up alleys in town.(Jim Mimiaga/The Journal) 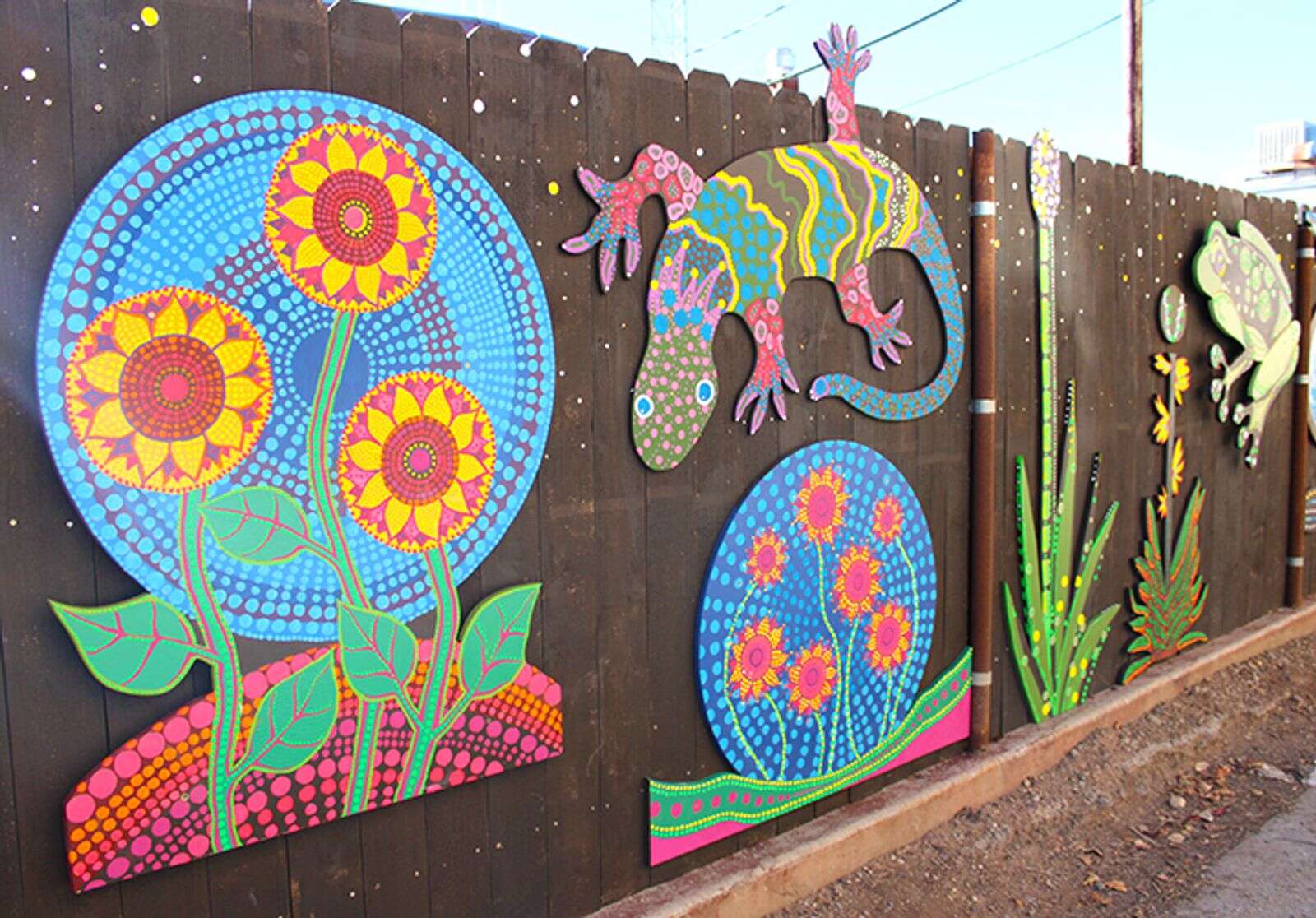 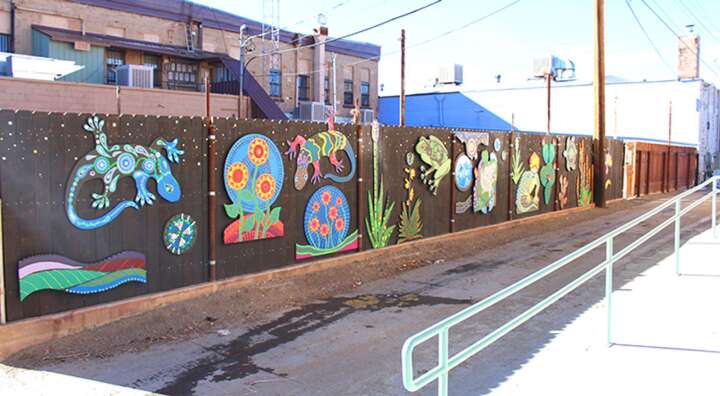 An alley between North Street and Main Street has been improved with vibrant artwork. (Jim Mimiaga/The Journal) 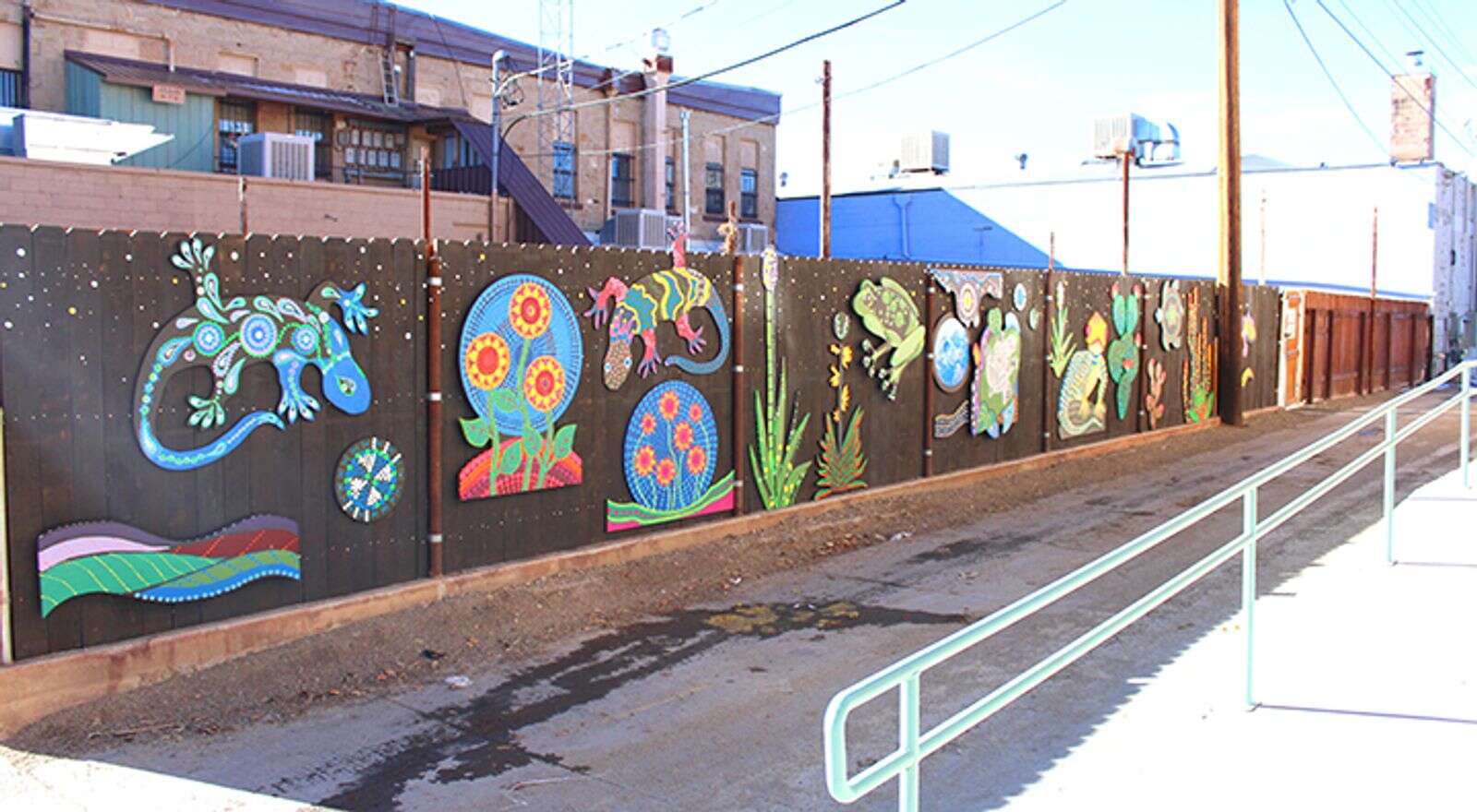 During its unveiling, the artwork will be illuminated by UV lights to enhance the oranges, reds, yellows, blues and other vibrant colors that of the lizards, toads, cactus, sagebrush and other subjects.

They say the Art Alleyways artwork captures “the distinct flavor of the Southwest United States.”

“This project is the first in a series of planned art installations, primarily in the downtown Cortez area, and is the result of a collaboration among Rotarians, local artists and Native American Ute students,” Rotary Club President Bill Teetzel said. “Plans are already underway for the second installation this spring.”

Teetzel said many people tend to think of Rotary Clubs as groups of old men smoking cigars, but he said that is not the case anymore. He described current members of the Club as “merry pranksters who hijacked the Club and want to do some good with it,” and said internationally over 50% of Rotary Club members are females.

More and more young people are joining the Rotary Club as well. Teetzel noted young local Mikey Mills as one member of the community who is joining the club as a liaison to find creative people in the area who would be able to showcase their artistic talents with Art in the Alleyways.

The goal of this initiative is to find people in the area with energy and creativity, whether that be in Cortez, Towaoc or the local high schools, to join in community building and help bring more people into the area to live and start businesses.

“This is not just another pretty art project,” Teetzel said. “It’s enhancing the cultural definition of Cortez.”

“Eventually, the back alleys of Cortez will become a cool place to walk around and look. It’ll be something that is always growing, always developing and always refreshing and unique,” he said.

People are invited to view the mural on Dec. 3 and enjoy apple cider and cookies. 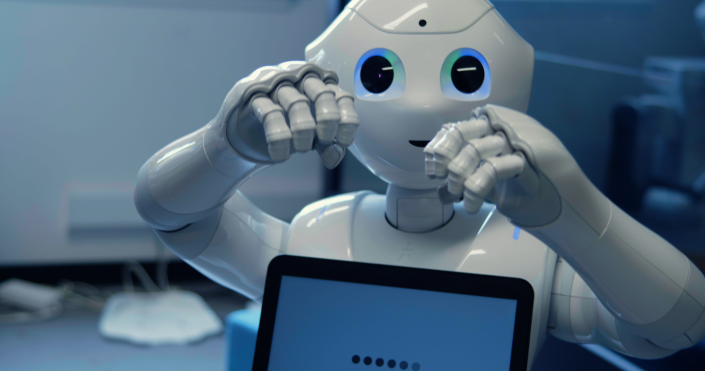 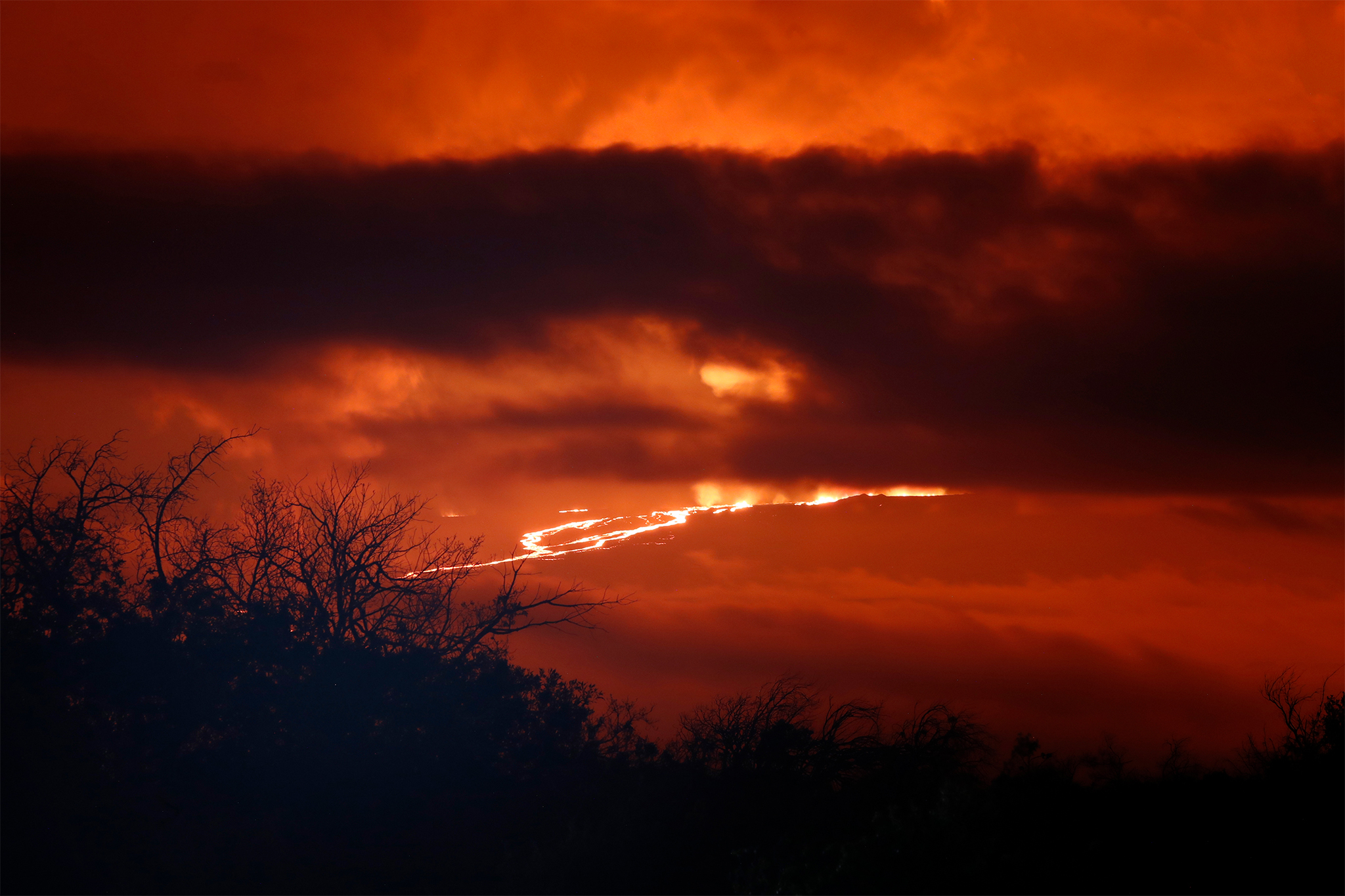