A prominent rabbi, Abraham Cooper, slammed Twitter on Tuesday after it was revealed that the tech giant’s newly appointed Middle Eastern news director had a history of making anti-Israel posts.

“In the case of this woman, it’s like putting the KKK in charge of what your kids are gonna learn about the Civil Rights Movement, from Twitter,” said Cooper on ‘Fox & Friends First’ Tuesday. “They just don’t care.”

On November 1, Fadah Jassem announced that she was joining Twitter as the editorial curation lead for MENA, ending her tweet with the emojis of many Middle Eastern countries flags, but did not include Israel’s.

In 2010, Jassem also tweeted that Israel “was not born,” but rather “dropped like a bomb in the middle of Palestine.” 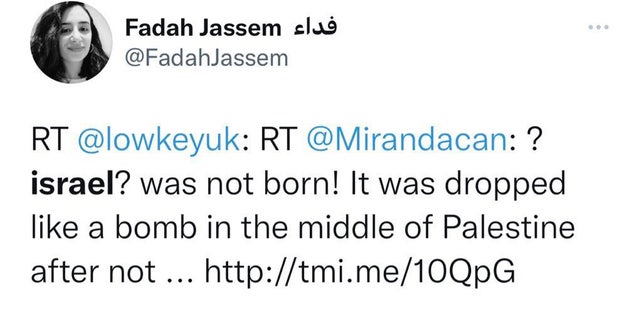 She later apologized for “forgetting” the Israeli flag and stated that she was “ill-informed with some tweets” she made at a younger age.

FBI statistics for 2020 showed that Jews in America constitute 58% of all religiously motivated hate crimes. Jews also are the third-largest victims of hate crime out of all minority groups in the U.S. ahead of Muslims, Hispanics, and Asians.

He said that Jassem’s apology “did not pass the smell test” and asked that she send a tweet to and sit down with the Simon Wiesenthal Center, of which Cooper is the associate dean. Cooper added that the larger issue was with Twitter’s management at the San Francisco headquarters.

“Their signal to the Jewish world is we just don’t care about you,” Cooper said.

The rabbi noted that Twitter had previously bolstered anti-Semitic messages, allowing over 200,000 tweets a day from ISIS before Congress intervened and “shamed” them to change.

When it comes to the Middle East, Cooper accused Twitter of “living in the last century” and playing a “dangerous game” in a time when “woke culture” has consistently “put Israel on the backburner.”

Cooper also added that Twitter could have done a lot more to “degrade” the hate and bigotry directed at Jews online, but instead engaged in a “scandal” to take down former President Donald Trump while allowing Ayatollah Khamenei to talk about a “final solution” for Jews and gays.

“Their arrogance is bottomless,” said Cooper.