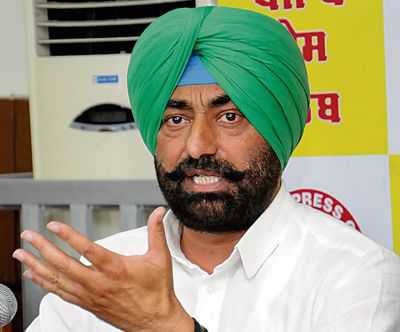 Chandigarh: The registration of an FIR against PCC chief Amrinder Singh Raja Warring and Bholath MLA Sukhpal Khaira for circulating a “fake” letter of political appointments signed by AAP national convenor Arvind Kejriwal has brought to the fore a Facebook page of Ankit Sexena, who claims to be a social media manager of the party. Though AAP has categorically denied having any such page, political circles are curious to ascertain the identity of the person, who not just created the fake ID, but even used the picture of Aniket Saxena, who looks after social media of AAP. Now, all eyes are on the Punjab Police as to how quick they can track down the person and bring out the truth.

Amritsar: Nobody knows if water bottles containing ‘neel’ hanging outside a substantial number of houses in the city solve the issue of dog poop. While veterinary experts say there’s no scientific evidence to support the belief, the residents seem to continue with the trend. As the Amritsar Municipal Corporation has failed to sterilise stray dogs and register pets, the residents have no other option, but to rely on unscientific methods.

Sangrur: Tight security and installation of barbed fencing near the residence of CM Bhagwant Mann is earning disrepute for AAP government. Before the 2022 Assembly elections, Mann and his team used to claim that after coming to power, protests would end as they would fulfil all the demands. “The protesters can be easily identified by cops. There is no need of tight security. The police have set up barricades to create fear psychosis among the residents. The move will backfire,” said a local.

Gurdaspur: While ecotourists visit Keshopur Chamb (wetland) during the winter when thousands of migratory birds from Central Asia and Siberia make it their home, Cabinet Minister Lal Chand Kataruchak visited it when the bird count is at the lowest. Locals nevertheless expected him to announce a revival package for the wetland which has fallen on bad days. Much to their dismay, the minister failed to announce any new scheme. Ecotourists say Kataruchak should have at least ordered a probe into the Tourist Interpretation Centre, which is lying in a state of disuse for the past five years, despite the government spending Rs 8 crore on its construction.

Pathankot: The Punjab and Haryana High Court’s decision to ban mining, both legal and illegal, near the International Border is bound to have a cascading effect. The supply of mining material will dry up, but the demand will always remain. This phenomenon will obviously jack up the rates. On the other hand, hundreds of transporters are on the verge of being forced out of business. Those selling spare parts say they are thinking of shutting their shops because the demand will recede. Labour unions have not at all welcomed the ban. They say hundreds of labourers have been rendered idle in one stroke. Over to the BSF, which has been asked to enforce the ban and that too strictly!