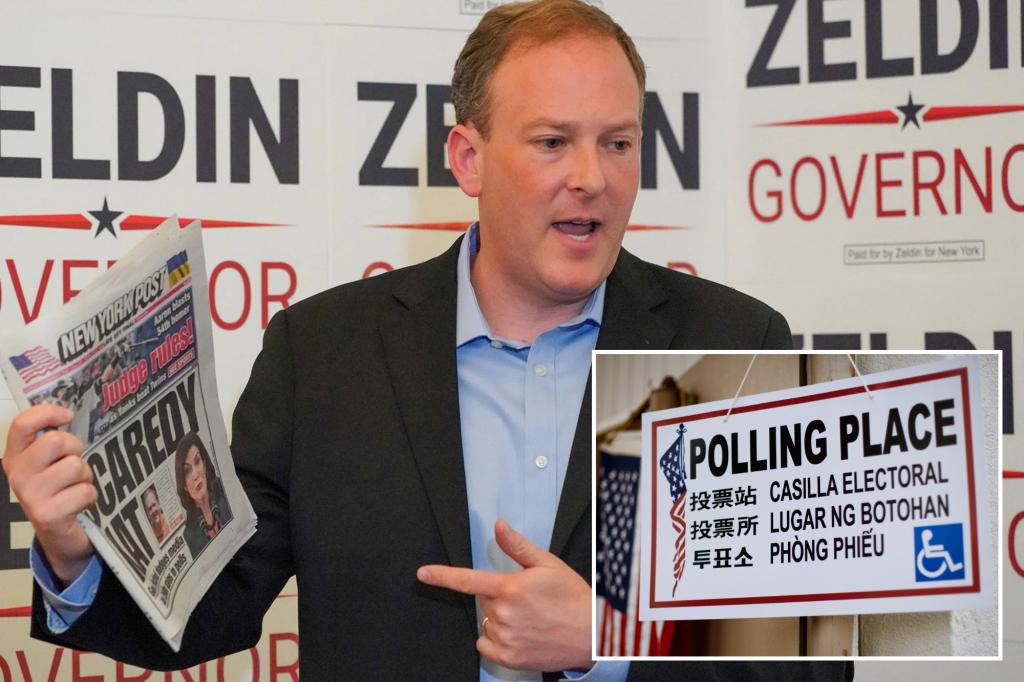 “Harness the outrage,” Stop the Insanity’s Chapin Fay said of channeling the power of issues like bail reform to woo moderate voters away from Democrats ahead of the Nov. 8 election.

“Communicate the shared values that they share with Lee Zeldin,” he added of whipping up support for the conservative Zeldin.

Vanessa Simon has resigned her position as secretary of the state Republican Party to lead the new PAC as executive director.

Recent election cycles have shown groups like Hispanics, Asian-Americans and Orthodox Jews drifting rightwards as some Democrats embraced defunding the police and bail reform amid rising crime and the COVID-19 pandemic.

Democrats have faced backlash among such groups in recent years over contentious issues like high school entrance examinations and COVID-19 restrictions, which could work to Zeldin’s advantage in his effort to become the first GOP governor elected in New York in two decades.

“They’re useful for everything from donations to [get out the vote efforts] but only for populations that really trust the technology,” he added.

The Stop the Insanity PAC has amassed more than $200,000 thus far to add to ongoing efforts on the political right to help Zeldin compete against Hochul, who reported having $11.7 million in mid-July compared to $1.57 million for Zeldin.

While small compared to Hochul’s war chest, six figures can buy a lot of targeted digital outreach if paired with the help of campaign leaders that Fay said Stop the Insanity would deploy on behalf of its pro-Zeldin messaging.

“I personally think like raising a lot of money and putting it off TV, statewide or even in New York City is not the most helpful thing,” he said.

The Stop the Insanity effort has the short-term goal of helping Zeldin and former Newsmax host Joe Pinion – the GOP nominee against Senate Majority Leader Chuck Schumer – win 30% of the vote in super-blue New York City, a widely-seen threshold for a winning Republican campaign statewide.

Efforts will continue past Election Day to build support left of the political center for Republican causes, according to Fay.

“He’s not going to keep up with Kathy Hochul’s special interest money,” state Republican Party Chairman Nick Langworthy said Monday about Zeldin catching up with Hochul amid accusations that her administration has given preferential treatment to campaign donors.

The incumbent Dem has repeatedly denied wrongdoing while claiming her prolific fundraising was necessary in order to secure her political standing last year after replacing disgraced ex-Gov. Andrew Cuomo, who resigned amid a multitude of scandals.

“We are using every tool in the arsenal to be fully integrated with Lee’s campaign. He will have his message out throughout this fall,” Langworthy added about Republican efforts to coordinate a response to Hochul’s ongoing blitz of statewide media.

The dueling parties have gone toe-to-toe in recent days on polling flattering to their respective nominee – with a six-point lead for Hochul over Zeldin in one poll suggesting the race might be closer than Democrats had expected.

Republican candidates besides Zeldin, who recently campaigned alongside Jewish leaders in Brooklyn, are also eyeing on and offline voters who might have been overlooked by previous political candidates.

“If campaigns aren’t using WhatsApp and WeChat programs, they are losing an opportunity,” political consultant Camille Rivera said in a text. “These are becoming the most common ways for engagement among Latinos and Communities. It’s easy to sue and is becoming a mainstream form of communication