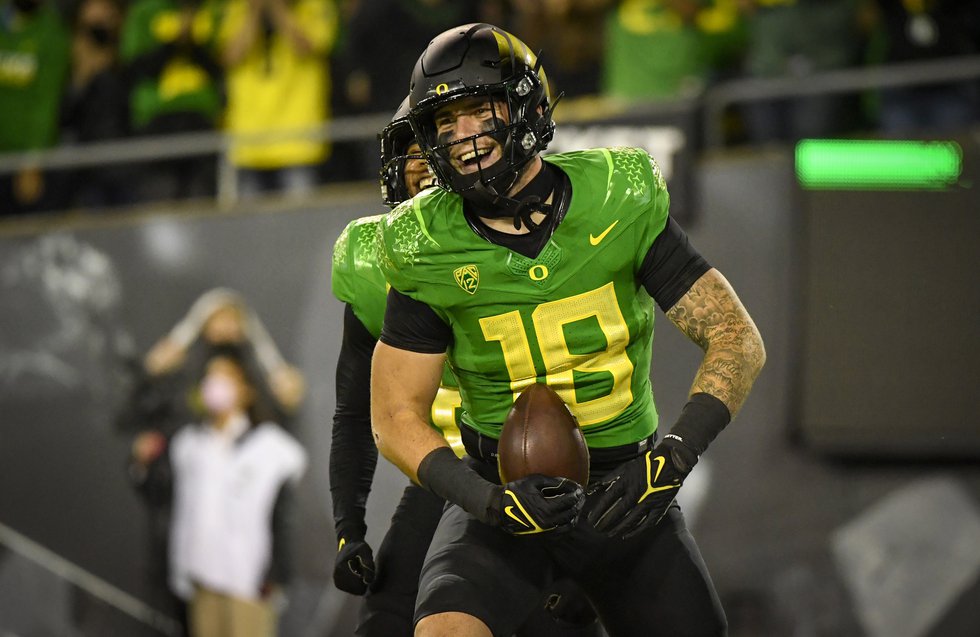 The 22-year-old who was expected to play his fifth football season at the University of Oregon this fall was found about 100 yards down a steep trail Wednesday afternoon at Triangle Lake. He was unresponsive and could not be revived by paramedics or bystanders, the Lane County Sheriff’s Office said in statement.

Authorities said his death appeared to be accidental.

Webb was also a social media star. His TikTok account, where he often posted about his life and athletic achievements, had more than 550,000 followers.

Triangle Lake and the nearby Lake Creek Falls are a popular destination for swimmers who navigate naturally formed rock slides by inner tube and swim in several swimming holes.

Webb was expected to compete for starting tight end this fall with Terrance Ferguson and Moliki Matavao, The Register-Guard reported.

During his four seasons at Oregon, Webb recorded 31 receptions, 296 yards, and four touchdowns. His first career touchdown was arguably his most famous play, a 20-yard catch over a defender on a ball thrown by Justin Herbert in the 2019 season opener against Auburn.

The player nicknamed “Spider” was a consensus four-star out of Christian Brothers High School in Sacramento; a top 10 tight end and top 300 prospects by ESPN, Rivals, and 247Sports; and the No. 1 tight end in California by ESPN and 247Sports in 2018, the newspaper reported.

“So full of life in every moment of the day,” Oregon football coach Dan Lanning tweeted. “Your smile and energy will be missed Spencer. I love you!”

Like his late grandfather, Donald “Spido” Webb, Spencer was a multi-sport athlete. He was invited by Oregon men’s basketball coach Dana Altman as a practice player when the Ducks were depleted by injury during the 2018-19 season, but didn’t end up joining the team, The Oregonian/OregonLive reported.

Webb is survived by his older brother, Cody, who became Spencer’s legal guardian 10 years ago, sister-in-law, Alicia, aunt and uncle, who all helped raise him.