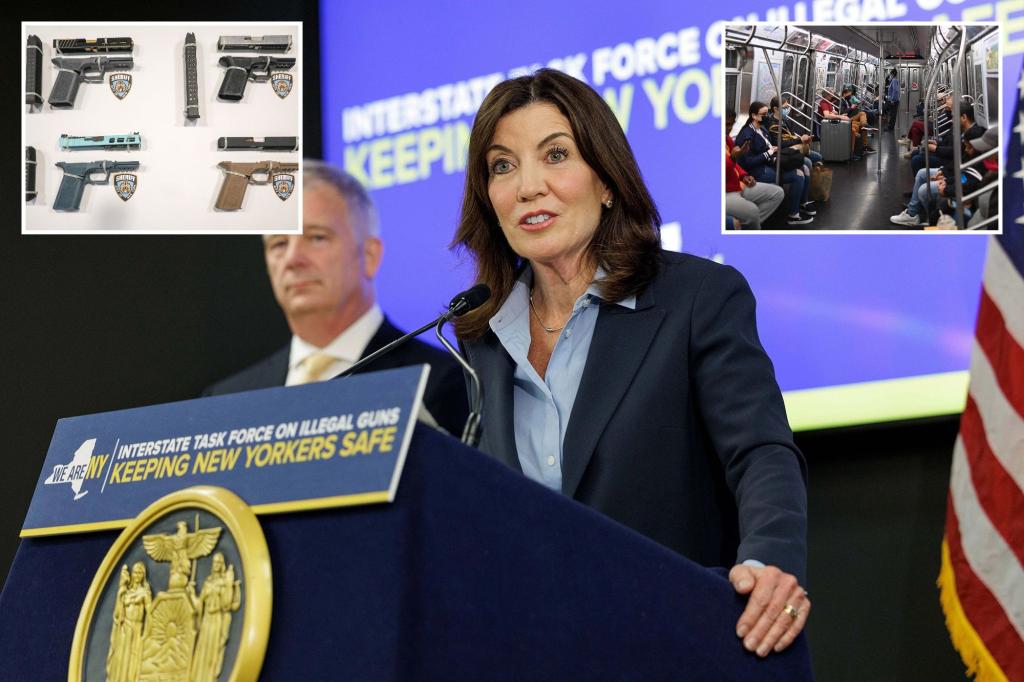 Your name, date of birth and Twitter handle, please?

The New York state Senate approved sweeping legislation Friday afternoon that would ban concealed weapons from so-called “sensitive locations” like Times Square, public transit and other venues — while requiring gun permit applicants to give the state information about their social media accounts as well as character references.

“This to me is the embodiment of what it means to be an American. In honor of our Fourth of July weekend, I look forward to signing the legislation as soon as it’s finished,” Gov. Kathy Hochul said at a press conference following the vote.

The Assembly was on track to pass the bill and send it to Hochul’s desk by Friday evening.

Debate on the bill began early Friday, one day after the extraordinary legislative session called by Hochul began — a delay attributed to last-minute negotiations over a conceptual deal touted by the governor earlier in the week.

“This is a very nocturnal place,” Hochul said of the final bill language dropping in the middle of the night – par for the course in a state Capitol where legislators often get little notice before votes on controversial bills.

The special session follows a controversial US Supreme Court decision last week that struck down a century-old state law requiring permit applicants to give a “proper cause” for wanting to pack heat.

The 6-3 ruling gave states leeway to restrict guns from “sensitive” places while maintaining permitting processes that lean on objective criteria.

“We are confident that we are providing New York, again, an opportunity not only to be able to have their concealed carry, but also to make New Yorkers safe,” state Senate Majority Leader Andrea Stewart-Cousins (D-Yonkers) told reporters Friday.

Among other information, potential firearm owners would be asked to divulge all social media accounts maintained over the past three years as well as provide references attesting to their “good moral character.”

Permit applicants will also have to complete at least 16 hours of in-person training, while private businesses will be off-limits to firearms unless their owners post conspicuous signage indicating otherwise.

Another provision of the bill expands a newly implemented ban on bullet-resistant body vests to include body armor like that used by a racist gunman as he targeted black shoppers at a Buffalo supermarket May 14.

Future ammunition purchases will require background checks in the future under the new law, with information on the buyer’s “date, name,  age,  occupation and residence” entered into a state database, according to the legislation.

While expressing confidence in the constitutionality of the new gun law, Albany Democrats said they nonetheless expect plenty of legal challenges from pro-gun groups.

Hochul is expected to sign the legislation soon after it passes both chambers of the Legislature, but Albany Democrats expect plenty of legal challenges from pro-gun groups.

“The Supreme Court did say you can still have criteria as to how [permits] are issued,” Assembly Speaker Carl Heastie (D-Bronx) told reporters Friday. “And so we believe that that falls in line with what we’re allowed to do.”