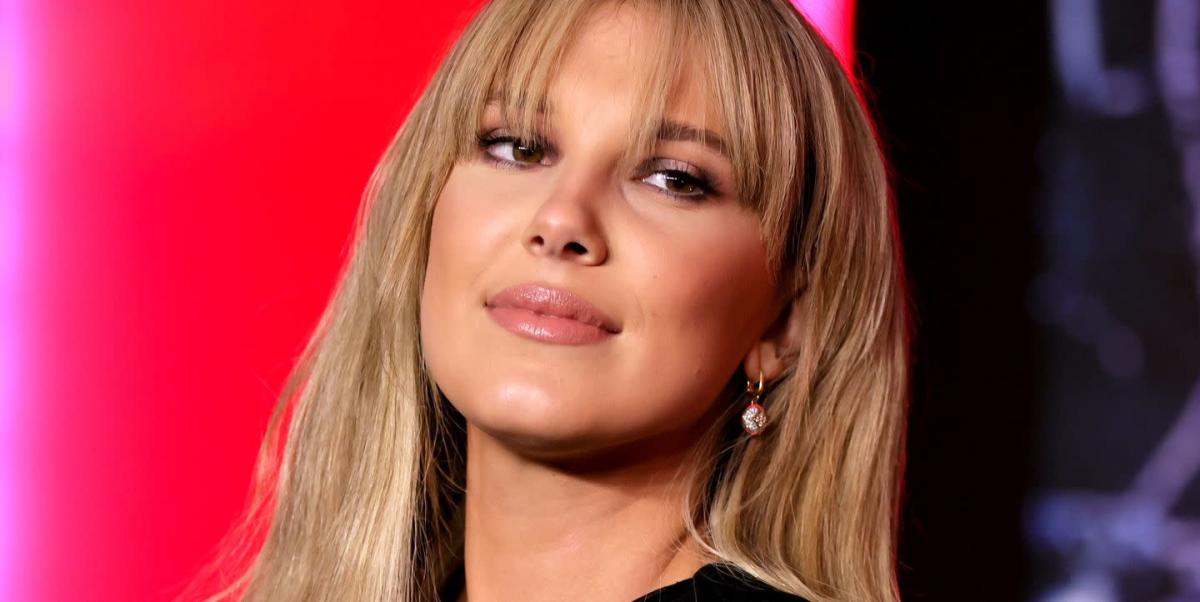 “Hearst Magazines and Yahoo may earn commission or revenue on some items through the links below.”

“I don’t know anything about skincare. I am the consumer,” states Millie Bobby Brown. She’s responding to my skepticism of an 18-year-old having a skincare line. With the market inundated with celebrity beauty lines, when a new brand comes on to the scene, one has to wonder, why?

Florence by Mills will be three years old this August, and Brown has no intentions of stopping this growing empire. Between acting, running a beauty brand, and being a teenager, she sits down to talk skincare, social media, and Stranger Things.

Brown is expanding Florence by Mills with an acne-fighting ‘Clear the Way’ collection consisting of a clarifying face wash and mud mask to help deep cleanse your skin. Like many teenagers with fluctuating hormones, acne is an issue. Attending red carpet events, she’d wonder why she was facing pimples. “I’m definitely a victim of my skin,” Brown admits, reflecting on troublesome acne that inadvertently accompanies her during some of her most prominent (and public) moments. Skincare has been a journey for the British teen. She explains, “I would go to the red carpets and come out wondering, ‘Why did this pimple suddenly appear?’ and ‘Why is my skin not liking this foundation that these people are putting on me?’” Relationship with your skin is personal and a journey in knowing what your skin likes and needs (and what it doesn’t). Brown has learned you can’t hide your skin—“I have wanted to put more makeup to cover it, but you have to embrace it and listen to your skin,” she advises.

The clarifying face wash contains one of the current buzz words in beauty: niacinamide—to help control oil. It also has salicylic, glycolic, and lactic acids to help minimize pores while smoothing fine lines and texture. The Clarifying Mud Mask focuses on unclogging and minimizing pores with charcoal and salicylic acid to extract all the impurities. The formula includes kaolin clay to exfoliate and lavender and tea tree essential oils to calm the skin.

“I have been looking for a skincare and beauty company that will curate ingredients and products that are fitting for my skin,” states Brown, admitting she’s spent 2022 learning about new skincare trends and understanding her skin, its problems, and how to solve them. It shows in her products as Brown is conscious of making them “clean” and cruelty-free sans ingredients like silicone and SLS/SLES. However, for Brown, it’s just not what’s in the products but also how they make you feel. She has a laissez fare approach to beauty and believes it’s up to each individual to interpret.

In the age of filters, allowing people to tote invisible pores and the smoothest of skins, I probe Brown about how social media affects her. She brushes me off quickly, stating, “I try to stay off social media as much as possible.” The call suddenly feels heavy. We don’t directly address the elephant hovering over us, but you can feel it. Brown has faced weird negativity from the Internet that isn’t the same as her co-stars or other actors her age. Whether it’s backlash for texts between her and Drake or criticism for her clothing, one can peruse the headlines and see them littered with an odd cynicism. Which is a strange thing indeed, given she is literally a child. In 2018, she took a public break from social media and, in a Beyoncé-esque fashion, closed off the world to her personal life and vowed that her accounts would only be used to promote her work. 18 is a transitional period for many. I cringe in horror to think her 54.3M followers could feel free to comment. “I think what people forget [is] that because my job is in the public eye, that doesn’t mean everything needs to be in the public eye. It’s about me going through things personally and wanting to keep it personal,” she reveals, almost slightly irritated as to why she has to explain herself. I agree with her, admitting I haven’t posted in about three months. She relaxes a bit—“Sometimes I need a mental break from it. It’s a very strenuous relationship with social media—sometimes it’s great, sometimes it isn’t. I aim to make it a happy, positive place that people can go to be embraced.” As she talks about how she wants the Internet to work, it’s obvious she’s creating a space that may not currently exist in her world.

When she’s not building her beauty empire or fighting online bullies, she’s focused on her first job—acting. At the time of our conversation, she’s in the car, leaving the set of Damsel, the new Netflix fantasy feature she’s starring in and executive producing. However, with a new season of Stranger Things out for binge-watching, Brown applauds her castmates, whom she has grown up with over the past four seasons. As she dishes about what goes on behind the scenes, she reveals a fun fact: “All of [us] are incredible singers.” The Duffer Brothers have announced that Season 5 will come out in 2024 and culminate the Stranger Things series. So will we get a musical episode? A Broadway production? Brown laughs and jokes, “Stranger Things on Broadway is coming soon.”