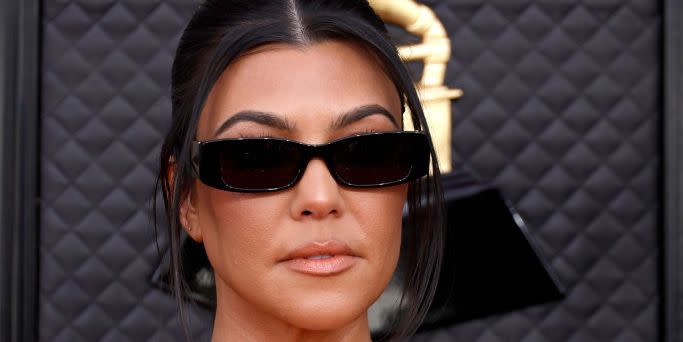 Kourtney Kardashian has just taken to social media to address rumours about alleged Instagram and TikTok accounts belonging to her son, Mason Disick. The reality star and Poosh founder, who has two other children with ex Scott Disick – Penelope 10, and Reign, 7 shared the tweet following posts that came from ‘Mason’s’ accounts claiming her younger sister, Kylie Jenner was getting married. The posts also suggested that the youngest Jenner sibling attended a bridal party with sisters Kim and Khloé, and Kourtney was adamant about clearing the air.

The 43-year-old has had problems in the past regarding her oldest son and social media. Back in 2020, Mason created his own Instagram account without his mum or dad knowing, and after promptly shutting it down, the 12-year-old went live on TikTok to dish some family secrets on the famous family – most notably ‘confirming’ that Kylie and Travis Scott were not back together at the time.

Speaking of the incident on a live IG story, Kourtney said: “He started an Instagram yesterday and didn’t ask us. I did delete it because Scott and I just felt like… He’s 10!” She continued: “I think on Instagram, the thing that really worries me with kids is just comments. People can be so mean. It’s really easy to get consumed with it. I just feel it’s not the time.”

And it’s understandable as a mum – especially one in the public eye – that she takes social media seriously, which is why Kourt was so eager to shut down the fake account rumours. We’re sure we’ll see Mase in his own time sharing what it’s like to be part of one of the most famous families in the world, anyway.