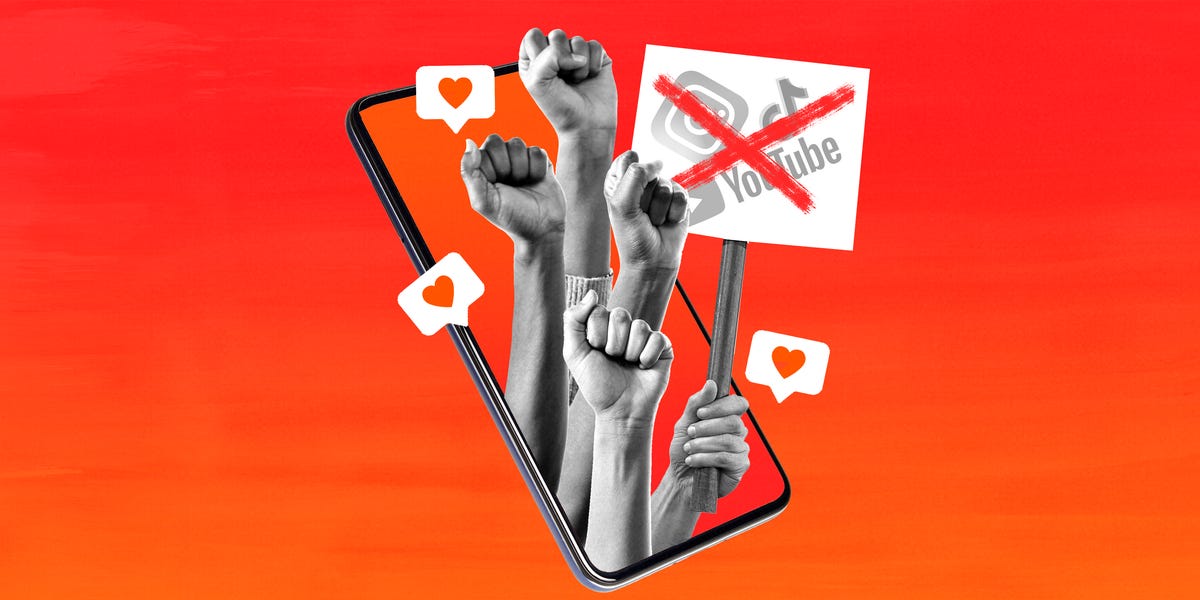 Kallie Tiffau, a 33-year-old artist and content creator living in New Orleans, used to have a successful niche Instagram account. They started it about seven years ago, with the goal of reaching as many people as possible with their memes. Maybe they could sell a few T-shirts as a little side income, but that was never the main point — the goal was to make fellow fat people feel better about themselves and find other people they could relate to. And by all metrics, Tiffau was successful doing that. Their meme account had 25,000 followers, posts were regularly viewed by over 500,000 people, and some posts went viral, extending their network and community further each month.

But then something strange started happening: The number of views on each post began plummeting. Now most posts are seen by fewer than 5,000 users.

“Not even a quarter of my followers are seeing my posts,” Tiffau told me. “It’s been crazy to watch that happen, and also crazy to see how many people call me crazy for pointing that out.”

For a while, people rolled their eyes at Tiffau’s claims that Instagram seemed to be de-emphasizing their memes in favor of branded content and TikTok-style videos. But then other users began noticing the same thing, and in late July, Kim and Kourtney Kardashian and Kylie Jenner all posted a block of text reading “MAKE INSTAGRAM INSTAGRAM AGAIN.”

Instagram admitted that it was indeed prioritizing videos over photos and making a slew of other changes. Some users protested the changes outside the offices of Instagram’s parent company, Meta. Soon after, the company caved to the backlash, pressing pause on its big update.

The uproar worked. But for Tiffau, Instagram’s constant changes made them realize their accounts were always at the whim of large tech companies, constantly fighting to be seen in the face of an algorithm they don’t understand. For years, social-media platforms have profited off creators like Tiffau while not providing much financial gain in return. And no one seemed to listen when Black or trans creators pointed out that they were not being treated fairly by the algorithm long before people like the Kardashians did.

“I had built a community specifically for me, specifically around fat people, that made me happy, helped me not feel bad about myself anymore — and people have told me it helped them, too,” Tiffau said. “People with marginalized identities, we’re all used to these spaces getting commodified to the point that they don’t work for us anymore, and having to move on and find the next thing.”

Tiffau has given up on finding community or support through Instagram: “It was a moment in time, and that moment is over now.”

People who rely on social media to find community or to make money are stuck trying to figure out how to game the ever-changing, opaque algorithms to their favor. But, as evidenced by the recent backlash, it seems people are finally fed up with chasing algorithms and want to take things into their own hands. The fallout from Instagram’s recent changes is proof of a burgeoning movement to take the labor involved in social media seriously. But for this movement to take back power from the big platforms and foster better social media, creators first have to see themselves as workers.

How to fight back against a behemoth

Creators’ influence over the platforms that govern their lives is so small because of the sheer size of social-media companies. Meta, with nearly 3 billion users, pulled in $117 billion in 2021. TikTok, with 1 billion users, took in $4 billion in revenue in 2021 and is expected to triple its revenue this year to $12 billion. And YouTube generated nearly $29 billion last year off its 2 billion users. The people who use the platforms have no say in how things are run — there’s no customer-service number to call, no guidebook provided when an algorithm is tweaked. How do creators — whether they’re content machines like the Kardashians or relatively small like Kallie Tiffau — make an impact going up against such large companies? The same way workers have always gained leverage against big companies: by organizing.

Influencers and creators often see themselves as self-employed business owners who make money off the platforms. But Instagram has made it clear that it holds the reins over platform changes that can affect users’ potential earnings. The recent fight against Instagram’s algorithm change proves that there’s a better way to operate in a landscape dominated by just a few corporations: If social-media users, especially those dependant on it for their incomes, start to see themselves as laborers deserving of protections, they have a chance to actually make social media work for them. That would mean redefining how we see social media. It benefits the companies that run our feeds to frame everyone as “users,” but if the companies are making money off the labor that people, especially creators with large followings, are putting into the platforms, maybe it makes more sense to see them as workers.

Meta made $40 per user in 2021, and since that’s an average that includes spam accounts, your grandma, and your high-school classmates’ many alt accounts, it’s safe to assume they made much more off larger accounts that get more views, likes, and therefore funnel more people toward ads.

At first glance, content creation might not seem like the most obvious industry to participate in mass labor action or form something like a union — after all, most people don’t make money from social media, and those who do, don’t work like people in other industries. Influencers are isolated from each other, are often in competition with each other, and are not bound to an office or factory. But many nontraditional industries have unionized or taken mass labor action and vastly improved their working conditions. Writers and actors in Hollywood, for example, belong to strong unions that have raised their wages, provided good healthcare, and ensured their lives were less precarious.

As the internet blurs the line between traditional writers, actors, and social-media content creators, there’s no reason that these jobs should be seen differently from a labor perspective. The fact that most content creators aren’t paid, or are paid very little, only bolsters the argument that they deserve more labor rights — in virtually every other industry, the idea of someone putting hours or days into a video, or any form of work, in exchange for zero dollars, would be seen as ridiculous or illegal, but we’ve accepted it as normal in the context of social-media labor.

A study published last year compiled data from 30 in-depth interviews with content creators on platforms like TikTok, Instagram, and YouTube. The authors found that the creators faced the same issues as other laborers in today’s economy, especially a feeling of constant precarity — they never knew where their next paycheck was coming from and they did not feel in control of their own labor.

“You as a creator are posting to this platform and may be making money from this platform, but you don’t own the platform, so at any point the rug can just be pulled out from beneath you,” Megan Sawey, one of the authors of the study and a grad student in communications at Cornell, told me. “It’s hard to fight back. You are just constantly subject to this precarity.”

But often, creators don’t see themselves as people with the ability to fight back.

“Part of it is this forced resignation to the platform,” Sawey said. “You don’t have a say in anything. You’re just doing your best with the tools that you have. Maybe there should be more of a pushback, but they’re just used to it at the end of the day, it’s almost an accepted part of the very frustrating and precarious realities of being a content creator.”

That may be slowly changing, with influencers and content creators realizing that they need to work together more to demand more transparency and standards in their industry. Sawey said she’s seen Google Sheets, forums of Instagrammers sharing their pay from brands, and Instagram pages that encourage creators to share information with each other and not accept “exposure” as payment.

Some content creators are beginning to see themselves like other gig workers, and that comparison could show a way forward.

Drivers and deliverers for Uber, Instacart, and other gig-work apps have led the way in trying to formalize the labor bond of their industries. Earlier this year, thousands of Lyft and Uber drivers protested outside of New York’s City Hall, demanding more labor protections. Coalitions like the New York-based Justice for App Workers, which represents over 120,000 drivers and delivery workers, have sprung up across the country. In the UK, Uber drivers won the first-ever agreement between the company and a union recently. And after much activism, California became the first state to classify gig workers as workers, instead of independent contractors. (The fate of the legislation is still up in the air, as companies reliant on gig labor bring court cases against the law).

“It could be good if there was something like unionizing going on in the content industry, but that’s also hard because there’s no workplace, there’s no place to share grievances, it’s hard to form a coalition when it’s so individualized,” Annika Pinch, a Ph.D. student at Northwestern University and a coauthor of the influencers study, said. “But that’s true of the gig economy as a whole — everyone is more isolated. The fact that it is happening with Uber drivers and other gig workers, that’s hopeful.”

There are some signs this wave of labor-rights organizing is pushing into the content creation business: SAG-AFTRA, Hollywood’s largest union, now accepts influencers as members. But the union still won’t be able to bargain directly with the platforms that employ influencers, at least not yet.

There are two major hurdles to overcome before creators might win widespread labor rights. The first is the problem with the gig economy writ large: The corporations that govern it wield immense power over labor rights in the US and beyond. They successfully lobby world leaders to make working conditions favorable to them, and they successfully win over the public to defend their business model. Meta is one of the top lobbyists in the US, spending over $20 million last year to influence politicians.

The second hurdle is more personal: Many, if not most, content creators still do not see themselves as laborers. The labor-activism movement in the industry is tiny compared to the size of the industry itself, and many work under the assumption that they do not need protections, unions, or any kind of coalition, because they’re convinced they can make it on their own. But that might be changing.

“People think of influencing as easy and democratic, like anyone can do it and make it,” Pinch told me. “But there’s actually so much time and labor that goes into it to make it a career. And there’s a huge gap between those who actually make it and those who don’t, but everyone is working under the impression that they might make it.”

While organizing among some social-media creators is on the horizon, the first step still remains largely untaken: Creators have yet to see themselves as workers.

P.E. Moskowitz runs Mental Hellth, a newsletter on psychology, psychiatry and modern society, and they are the author of the forthcoming book Rabbit Hole, a combination of memoir and reportage looking into the role drugs play in our happiness.