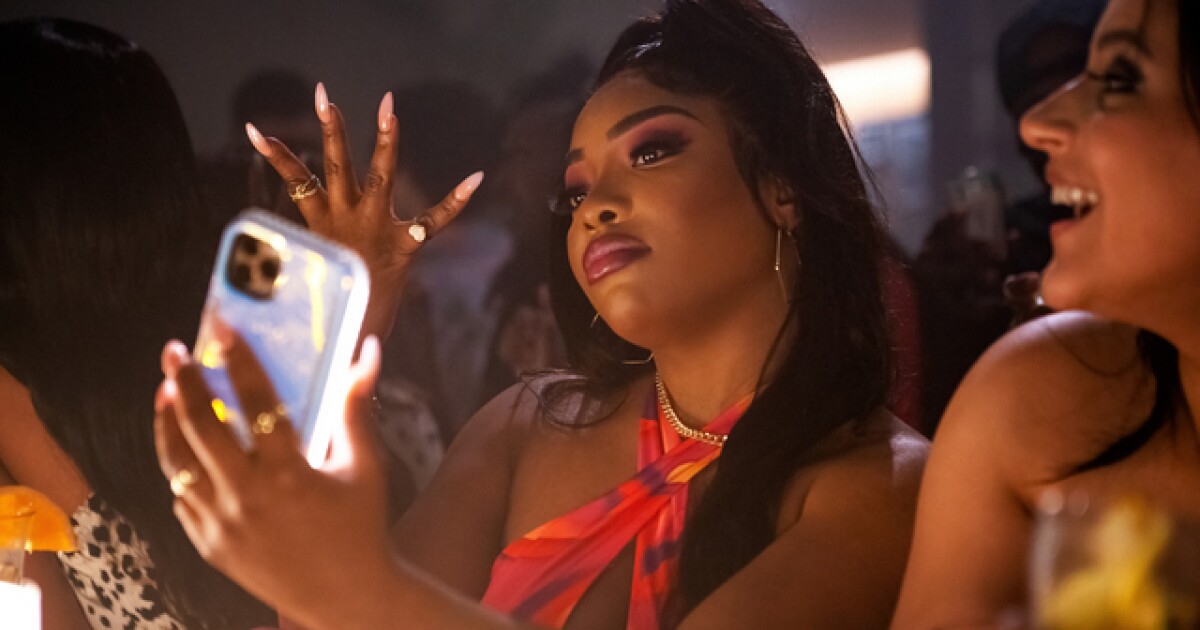 The first episode of HBO Max’s “Rap S—” follows two friends — once estranged, now reconnected — on any and every social media platform, the camera swinging and a record button sitting at the bottom of the screen. Back in the car after a night out, they tap into Instagram Live and Mia Knight (KaMillion) gets real with Shawna Clark (Aida Osman). The elements of Instagram Live — the handle, the number of viewers, the comments — fade from view and the camera zooms in on Shawna as her demeanor changes and she realizes the damage she’s done to the friendship.

“Oh s—! We still on Live with this fake deep s—,” Mia says, the elements of Instagram Live reappearing on screen.

The world created by the filmmakers behind “Rap S—” gives viewers an authentic social media experience while telling the story of Shawna and Mia’s rap career together. From fast-moving phone shots to unflattering angles, creator Issa Rae’s latest series brings to life an emerging film language. But it couldn’t have been accomplished without the creative team collaborating and experimenting to create an innovative portrait of life with — and through — social media.

Director Sadé Clacken Joseph says that the car scene in the series premiere is a symbolic moment for the characters that sets a precedent for what’s to come.

“I wanted, visually, for the camera to do something that it hadn’t done before, like go from Live into the real world,” she says. “I’ve always wanted to push in past the glass, literally and symbolically.”

She saw it as the “realest moment in the whole script,” and wanted to reflect that shift where viewers were taken out of the polished social media persona and into an honest moment between women.

Showrunner Syreeta Singleton says she initially couldn’t picture what Joseph pitched, but trusted her vision. In the resulting scene, Shawna and Mia break away from their heartfelt moment and start rapping together, sparking the beginnings of their rap career — and the rest of the show. While filming, director of photography Lucas Gath recalls, “I just remember looking around set and seeing a lot of nodding heads and smiling faces.”

The style of “Rap S—” began with Issa Rae’s script for the pilot episode, which was told entirely through a cellphone, Singleton says. The question arose: Should the series stay inside the phone throughout, or move back and forth between the phone and the world outside it?.

“I was like, we should try to have this be part of the world,” Singleton says. “I’m a fan of, ‘Let’s not tell ourselves no.’”

Singleton says that in her experience, writers tend to focus on the story and the director comes in with ideas for how to shoot it. But with “Rap S—,” the filming style was part of the writing process.

“There was storyboarding, there was a lot of previsualization, there were test shoots on test shoots,” she says.

Joseph saw Rae’s original script, completely filmed from the perspective of a phone, as “a really exciting challenge.” She wanted to use the camera as a character, but didn’t want the shifts to social media to become a headache.

“I wanted it to be really intentional,” she says. “When a character was forced to be present with themselves, or just wasn’t aware that they’re being filmed, I didn’t want to be in the phone.”

Creating the visual language took practice and experimentation; the goal was to go deeper into that interaction, aesthetically, than the usual over-the-shoulder shot of a phone that many productions rely on when social media use is part of the script.

Joseph and Gath examined people’s relationship with social media, tapping into the filters and angles utilized to create a polished image of someone online. The two filmmakers asked actors and others in the production to play with their phones while they took notes.

“Each person would film themselves differently, sometimes with the camera high up,” Joseph says. “It was just so interesting to really home in on how we interact with devices and how we choose to present ourselves.”

Capturing this reality, Gath says, meant leaning into “bold” choices — such as filming from a very low angle that points up towards someone’s nose — and, occasionally, missteps. “We all had to be very honest with each other and humble, and say, ‘Man, I thought that was going to be amazing and it sucked,’” Gath says.

Finding the style of “Rap S—” also meant overcoming a technical challenge: how to replicate the shakes and rotations of someone holding a phone, which is difficult with a large camera. Specially designed rigs allowed the cameras to sit on the actors and let them interact with it the same way they would a phone.

Gath says they began by speaking with the creator of the rig for Alfonso Cuaron’s dystopian 2006 film “Children of Men,” then went to Miami to tweak and create their own iterations. There was a lot of trial and error.

“I remember putting it on one of my best friends who’s an actress — she helped us fill in for Shawna — and during our tests, we put it on her and she couldn’t stand,” Joseph says.

Over time, they created rigs for every situation: walking and talking; looking down at a phone in one’s hands; a super-low angle for shots that look right up at the chin. As they honed the rigs, they brought in the actors, who then had the challenge of performing with them.

“They were wearing these camera rigs while they were acting for the first time,” Joseph says of Osman and KaMillion, both of whom are making their debut as lead actors.

Crediting the leadership of Rae, Singleton and Joseph, Gath calls “Rap S—” an “amazing cinematography experiment.” One made possible, Joseph adds, by “the power of Black women”: “I don’t think anything’s been done like this, to this scale, with so many Black women [at] the helm,” she says.

In the series, as Shawna realizes her social media identity does not reflect the person she is with Mia, viewers see a connection that goes beyond the boundaries of a phone camera or livestream. At the same moment that the filmmakers take viewers out of the phone, the heart of “Rap S—” reveals itself.

“I wanted the audience to feel a shift in that moment and understand the show is so much deeper than social media and the glitz and glamour in the industry,” Joseph says. “At the heart, it’s about Black female friendship and the power of women supporting women.”