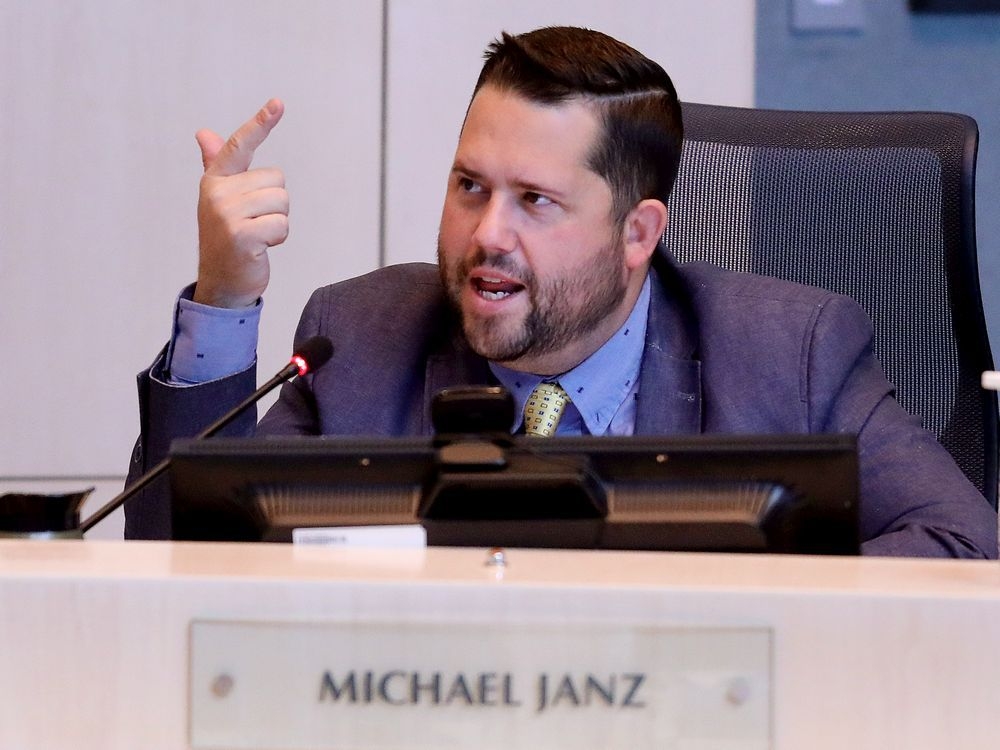 It should be obvious I’m not a big fan of Michael “Mosquito Mike” Janz, the city councillor most responsible for ending the city’s mosquito-spraying program. The flying pests are noticeably worse this summer; I’ve got the bites to prove it.

In general, I don’t care for Janz’s politics and especially his anti-police harangues. Check out his Twitter feed. He complains about police about once a month, sometimes even more often.

He accuses them of race and class double standards. He thinks they slough off investigations of alleged crimes against lower-income Edmontonians and routinely mislead the public to cover their own misdeeds.

I find it particularly detestable that he is alleged recently to have retweeted a post from a Calgary account referring to police as “pigs.”

(Calling the police “pigs” is not only detestable, but laughably archaic, too. Hey, Councillor, the late ’60s called. They want their tie-dyed shirt and peace medallion back. Groovy, man.)

Yet, so long as Janz must account to his voters, he should be free to tweet and retweet as he sees fit. The relationship is between the electors and their elected representative. If they disapprove of his online behaviour, they can vote him out of office.

Janz should not be investigated by the city’s integrity commissioner, or as I would recommend renaming the position, the city’s social media censor.

It should be up to the voters who elected Janz to punish him, if they so desire, not some appointed adjudicator who doesn’t answer to voters directly.

A complaint has been filed with the integrity commissioner, Jamie Pytel, by sometimes local Liberal candidate, Thomas Deak. In the complaint, Deak says Janz retweeted the following post, “So this week a co-worker got a $409 ticket for failing to stop his bike at a stop sign. It was 7 a.m. in a residential area, the roads were empty, except for the pig hiding in the bushes.”

Get outraged. Compose an email to the Sun. Post your own tweet condemning Mosquito Mike for his retweeting of juvenile, anti-police name-calling.

But don’t go running to the censor asking her to clap Janz in irons just because you find his opinion (in this case his second-hand opinion) infuriating. Grow up. This is a democracy. We get to have opinions, even unpleasant ones, so long as we respect the right of others to opinions we vehemently disagree with.

Remember, that any government tool that can be used to hush-up your opponents will almost most certainly be turned on you one day, too.

I find it hilarious that Janz, in his own defence, insists there is a plot to “erroneously paint me as some sort of anti-police radical.” Nothing “could be further from the truth.”

Apparently, in his own mind, Janz is a big fan of police.

But remember, Janz was recently also hauled before the integrity commish for tweeting, liking or retweeting nearly two dozen anti-police posts near the end of last year.

Hmm, he certainly has an odd way of showing his love and respect for the Edmonton Police Service.

Own it, councillor. You don’t like the cops much.

But that is his right. He gets to have a seat on council and hold juvenile, archaic, anti-police opinions until the voters in his ward tire of his schtick and punt him from office.

Even after that, he still gets to hold his objectionable views, he just can’t do it as a councillor anymore.

In his run-in with Pytel earlier this year, Janz was not sanctioned by Edmonton’s in-house play-nice-children scold.

The whole integrity commissioner ideal just gets in the way of democracy.

Sign up to receive daily headline news from the Edmonton SUN, a division of Postmedia Network Inc.

Thanks for signing up!

A welcome email is on its way. If you don’t see it, please check your junk folder.

The next issue of Edmonton Sun Headline News will soon be in your inbox.

We encountered an issue signing you up. Please try again