Serbian twitterer “El maestro” left an enthusiastic comment in response to a video posted by a Foreign Ministry official that showed 24 illustrations depicting the well-off and happy lives of 56 ethnic groups in China.

“Guangdong, Jiangsu, Guangxi (Guangzhou, Foshan, Shenzhen, Suzhou, Nanning). I liked it a lot and for sure I’m coming back as soon as possible. Loved everything about China, the people, the food. I like how safe the country is,” El maestro wrote in response to the question the official Zhao Lijian posed in his post: “China has wonderful land and hardworking people. Which provinces have you been to?”

The 24 illustrations form a long picture scroll called “Out of Poverty: Not One Less” that was created by local studio Fusion Era run by a group of Gen Z youth. They depict the culture, history, landmarks and people of different regions and ethnic groups in China.

The scroll also has an interactive treasure hunt game and is embedded with 100 surprises, including stories of China’s poverty alleviation, the shining aspects of the Party’s century-long history, and aspects of the Chinese nation.

It had attracted about 160 million views on more than 60 social media platforms at home and abroad as of 11am on July 27, of which more than 6 million users had participated in the treasure hunt.

The Fusion Era studio was established in 2019 and created works for films made by European and US companies and cooperated with domestic museums, main designer Hu Muyang said.

But last year the team had to work from home due to the coronavirus and decided to deliver something to the public through illustrations. At the time, China was dealing with “rumors and slander” from overseas.

“We also hoped with our works to counter the rumors and tell stories about the real China,” Hu told Shanghai Daily. “We wanted the world to hear Chinese voices and insisted on showing Chinese society and culture from our own Gen Z perspectives.”

Though the studio is based in Shanghai, the team members and their collaborators are from all over the country, including several from ethnic minorities like Miao.

Hu was once invited to a panel discussion organized by local government about young content creators’ lives and the entrepreneurial environment in Shanghai. During the discussion, he brought up the idea of creating something to tell the sense of community of the Chinese nation and the nation’s concept of eco-development, as well as the fruits of the poverty alleviation campaign.

“We used to see examples of students who could finally leave their hometowns in poverty-stricken mountainous areas purely through their own efforts, such as outstanding university entrance exam scores,” Hu said.

“But now we’ve eliminated poverty. So we hope to say that people are leaving these areas with joy and pride toward their hometown and can return without fear of poverty. That’s what we called rural revitalization.”

Poverty alleviation has also helped to eliminate conflicts between people and nature because there’s no longer a need to destroy the environment just for money, Hu added.

And these ideas are all reflected in the 24 illustrations which were completed within 41 days.

“Sometimes we had no time to sleep,” Hu said. “The members in different provinces set the same alarm clock and slept two hours.”

The team perfected their works by improving the detail. On the illustration of Yunnan Province, they decided to use the image of Zhang Guimei, a teacher who founded a high school and worked for female education in poverty-stricken mountainous areas. But there was debate about how to depict her facial expression.

Some team members thought Zhang should show her fatigue caused by hard work, as did her photos in some media. But Hu and others felt that, although Zhao had worked very hard, she had joy in her mind, so she should have a smile on her face.

Eventually, they referred to some old photos of Zhang when she was young and put a smile on her for the illustration. “This came about because we believed that Party members like Zhang are happy and have a passion to change a poor and less advanced area’s condition with their hands. It’s a great job.”

Foreigners want to see a real China and high-quality cultural products. That’s why Chinese rural lifestyle YouTuber Li Ziqi is so popular and Chinese animation and Chinoiserie fashion has risen in overseas markets.

Every illustration features more than 10 elements and every one of them had many such details needing to be carefully considered.

For the illustration of Henan and Shandong, one of the artists insisted on including the image of Jiao Yulu, a civil servant who sacrificed his life in 1964 while trying to alleviate poverty. The artist thought his inclusion would demonstrate that poverty alleviation had been pursued in China for seven decades.

Hu said the team planned to use multimedia to show more aspects of China and Chinese people, including animation, interactive games on the world’s largest online gaming platform Steam, and picture books for children.

“Foreigners want to see a real China and high-quality cultural products. That’s why Chinese rural lifestyle YouTuber Li Ziqi is so popular and Chinese animation and Chinoiserie fashion has risen in overseas markets,” Hu said. “For us, we hope our content can be tested by the market.”

“We did lots of work selecting highlights from massive amounts of ethnic culture content,” Yang said. “What impressed me was the love of these young people toward their motherland and their confidence in Chinese culture. Their great passion moved me.”

Yang said her team will continue to work with Fusion Era, Bilibili and more new media to spread their research.

As “treasure guardians,” the 24 content creator uploaded videos on Bilibili to tell stories about their designs to netizens at home and abroad.

They explained the “treasures,” or “knowledge surprises,” behind the long scroll, shared their feelings on how to tell Chinese stories, and how to interact and grow together with their peers in Gen Z.

Netizens can follow their dynamic hints and go to the long scroll to discover the wonderful content shared by these “treasure guardians.”

“Generation Z is a generation of Internet natives and a generation of self-confidence,” said Bilibilier Wang Xiao Albert, the “treasure guardian” of Tibet on the scroll. He said there are many touching stories in China’s development waiting for content creators to dig out and tell in a way that is more familiar to young people.

He said “Out of Poverty: Not One Less” is very innovative and makes the process of treasure hunting interesting for netizens. 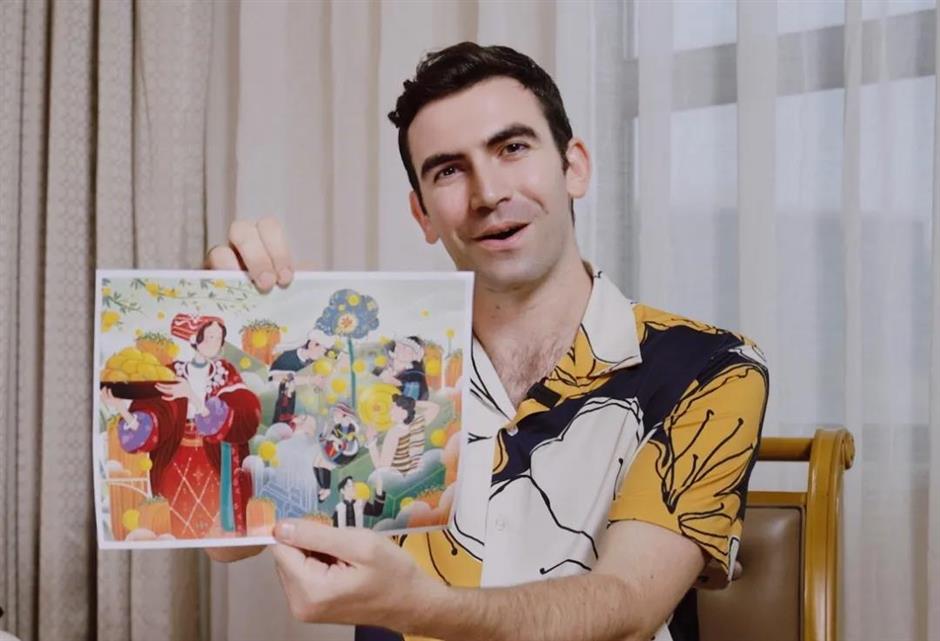 Another Bilibilier, Gao You Si is an Israeli who is “treasure guardian” of Yunnan and has been in China for more than 10 years. He started to tell China’s stories through short videos and live streaming four years ago to help Gen Z around the world to increase their knowledge and understanding.

He said that what he saw and heard in Yunnan really made him feel the achievements of China’s poverty alleviation. In the future, he would like to help more foreign friends come to China and explore the country through their eyes, their culture and their language.

(Yao Han contributed to this article)