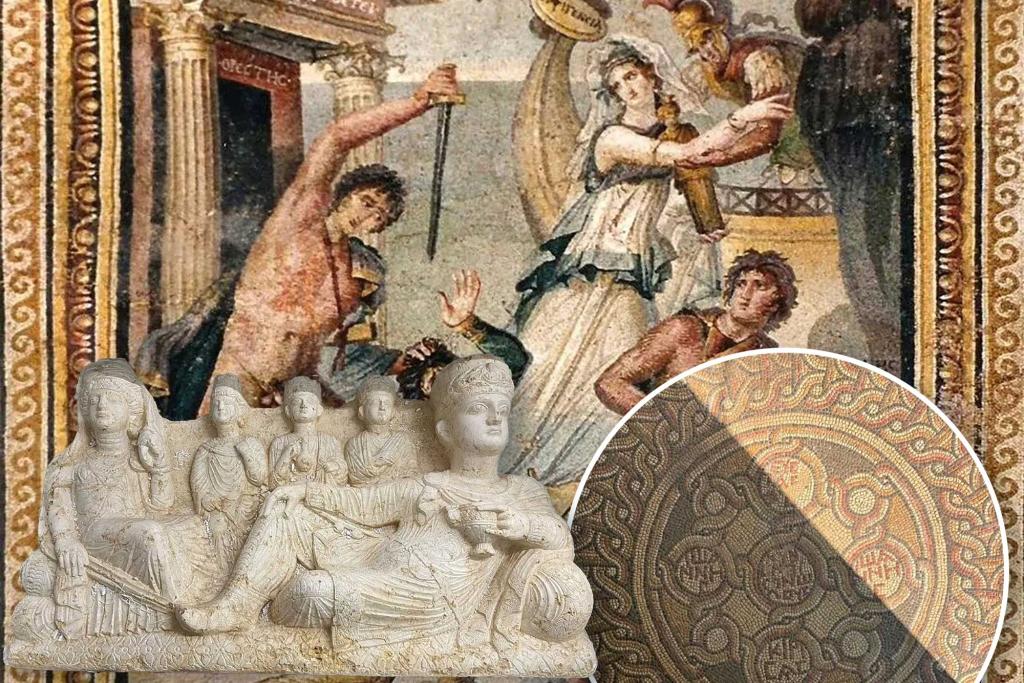 George Lotfi was a rarity.

Ranking among New York’s more venerable dealers in antiquities, he was also a prolific whistle-blower — cooperating with the New York City district attorney’s office to rat out sellers-and-smugglers who peddled treasures that had been looted, faked or ginned up with phony provenance. He even created a document which showed law enforcers how smuggling operations work.

Turns out the 81-year-old really knew his stuff.

Earlier this month, the Criminal Court of the City of New York put out a warrant for the arrest of Lotfi. He is being charged with 24 counts of possession of stolen property, seized from a storage unit in Jersey City, NJ. The property in question: supposedly looted artifacts dating back more than 1,000 years and valued at millions of dollars.

Among the allegedly illicit items confiscated from Lofti when authorities closed in on him last year are a Syrian artifact known as “Iphigenia and Orestes Mosaic,” which depicts an episode from Greek mythology and has a value of $2.5 million; the so-called “animal mosaic,” allegedly looted from Syria, dating to between the fifth and sixth centuries, displaying a panther and birds, valued at $100,000; and the “church mosaic” with the names of church donors written in Greek letters and valued at $70,000.

The 24 items are each said to be worth between $20,000 and $2.5 million. Referencing a $12 million marble bull’s head, previously released by the Met due to its questionable provenance, the arrest warrant describes Lotfi as “the first documented possessor” of the rarity.

“Apparently, according to the warrant, Lotfi dealt in illicit antiquities,” Christos Tsirogiannis, head of Illicit Antiquities Trafficking of the UNESCO Chair at Ionian University in Greece, told The Post. “He was a dealer receiving stolen antiquities, either dug up from the ground or excavated properly and stolen. He got them, sold them, made a profit. Apparently, he is part of a link in a chain of illicit profits.”

According to May Azoury, Lotfi’s lawyer in Lebanon, “From a legal perspective, accusations of this specific arrest warrant only concern the 24 pieces seized in the client’s private warehouse in New Jersey. Ownership of all of them is claimed by Lebanon and there is a pending court dispute for title, filed by the client before Lebanese court.”

As to how such works come onto the market, Tsirogiannis explained” “You make a lot of money by selling illicit antiquities that get looted from countries, often during unstable times.”

Five items that Lotfi is charged with wrongly possessing are alleged to have left Lebanon during the Civil War there, which went from 1975 until 1990.

“Then there are the illicit groups that dig through archeological sites at night [often in North Africa, Near East and the Middle East],” Tsirogiannis added. “They loot and smuggle the goods. Then they sell them abroad with fake provenances. They make easy big money.”

Rather than trying to hide what he stands accused of dealing in, Lotfi signed a consent-to-search form and gave investigators a key to his allegedly illicit stash. He told them about owning an ancient limestone sculpture known as the Palmyra Stone, weighing 1,500 pounds and valued at $750,000. That was recovered last September.

“He thought they would not recognized the goods as illicit,” said Tsirogiannis, marveling over the behavior of a man accused in the arrest warrant of having “created a false paper trail.”

“How would it be possible for specialized police officers to be allowed into a storage room and not recognize it? This is what would be expected to happen [Lotfi getting busted],” Tsirogiannis said. “The question is why would Lotfi do it that way. I can’t understand what he was thinking.”

Investigators have a pretty good theory, according to the warrant: “The defendant thought he could use his relationship [with law enforcement] to try to convince us that his false provenance was accurate and truthful.”

Lotfi could not be reached for comment by The Post, but claimed to the Times that the works are all above board.

In terms of his whereabouts, a former colleague — who describes Lotfi as “a funny guy who doesn’t always respond predictably” — told The Post, “I don’t know where he is at the moment, but he is not in New York. There is a warrant for his arrest [there].”

Lotfi, a collector and dealer who grew up in Lebanon, keeps a villa in that country as well as an apartment in France, where, in 2012, according to the arrest warrant, he had Libyan statues “seized by French law enforcement authorities on suspicion of having been looted.” A former colleague described his homeland as “the place that is a crossroads for the material he buys and sells.” Lotfi earned his first fortune through a much loved and eponymous pharmacy in the city of Tripoli. Later, as s a collector and dealer, he specialized in antiquities from the Middle East.

“He is charming, international, sophisticated,” a Manhattan gallery owner who knew Lotfi told The Post. “Instead of wearing a tie, he had a silk scarf tied around his neck and it would come out of his shirt. That was his style. He wanted to convey that he was living a glamorous life.”

In Manhattan, Lotfi resided in an apartment across the street from the Met and took a French woman for his bride. “He had many friends,” said the gallery owner. “Now, though, I don’t know if he still does.”

None of it tipped people off that Lotfi might be quietly working with law enforcement.

Revealed in the arrest warrant is one of Lotfi’s greatest hits as an art-world whistle-blower. In 2019, he exposed a collectible at the Metropolitan Museum of Art, which had built an elaborate exhibit around a golden coffin that dated to the first century BC.  The ancient coffin, said to have been bought from a Parisian dealer with a fake but convincing provenance, was then removed from the museum floor and shipped back to Egypt.

As to what might have motivated Lotfi to turn things upside down for the museum, the gallery owner has an idea: “It could be that he was offered this piece, he didn’t get it and all of a sudden it was a $3- or 4-million piece at the Met. Then he was upset and decided to make it so nobody [outside of Egypt] could have it.”

Indeed, according to the arrest warrant, Lotfi “had the opportunity to buy” the coffin. Additionally, it states, he “refused to assist further [in the coffin investigation] when he learned that the [investigation’s task force, including assistant district attorneys and antiquities trafficking analysts] does not pay for information, despite his repeated requests over the years for financial rewards.”

Though Lotfi has claimed to be a collector and not a smuggler, Tsirogiannis remains unimpressed.

“Nobody should have these objects,” he said. “But having it in the storage unit, with the officers coming in, you cannot get more obvious than that.”