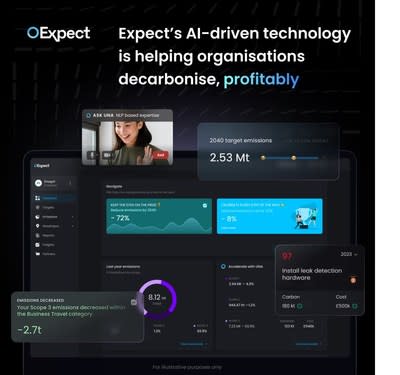 Expect’s mission is to help its customers and partners collectively reduce CO2e emissions by 500 megatons this decade through its Climate Action Platform.

UNA™ – Expect’s Climate Action Platform with its AI-first approach, helps organisations to diagnose, understand, navigate and accelerate the reduction in carbon emissions. Its proprietary data-first approach ensures organisations can measure the return on investment for each recommended action UNA™ provides.

The fundraising which in fact closed at the start of June 2022 enables Expect to further its intellectual property, build an experienced team and sign revenue-generating deals with customers and partners. This list of partners now includes several established players, including BP, Oliver Wyman, Proxima (now Bain), True Global, Saranac Partners and Barclays.

Thanks to these investors and partners, Expect™ now has a presence across the  UK, EU, GCC and Australia with offices in both the UK and Australia.

Schuster comments “an ever-increasing number of organisations make net zero pledges. Few have a  plan for how to get there. Expect™ fills that gap. One of the most promising green-tech solutions out there.”

Leading organisations are already using UNA™ and with further customers set to be announced in the coming weeks, Expect is on a strong trajectory to become a market leader in the space.

The climate-tech startup was founded in 2021 by Anand Verma who has dedicated his life to fighting climate change. He was previously the Founder and CEO of Design & Innovation company Brilliant Basics which was successfully acquired by Infosys.

Commenting on the funding round, Anand Verma said “I am delighted to see Expect going from strength to strength over the last few months. It’s amazing to have our pre-seed investors from the UK, Europe and Australia who believe in Expect and its potential to create measurable impact.”

The time to act is now and Expect™ is doing just that.