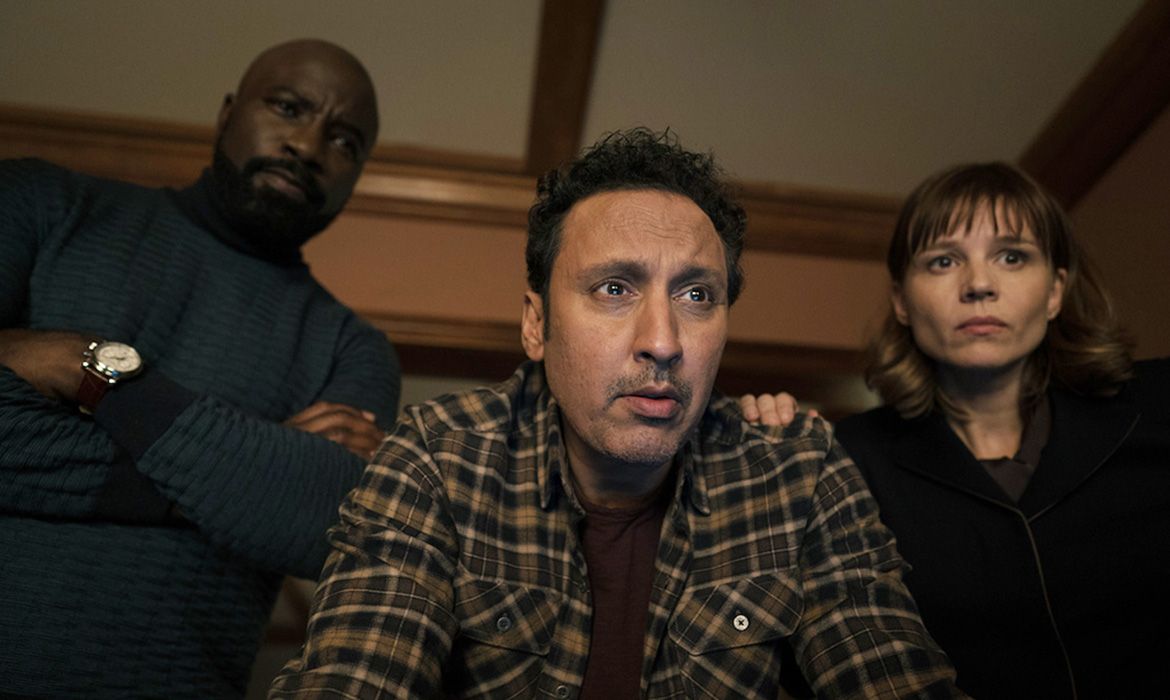 Editor’s note: The below article contains spoilers for Season 3 of Evil.Evil, now in its third season, continues to both expand and center its mythology as well as its eerie religious-tinged lampoon of modern pop culture. Whereas Black Mirror and its various analogs look to the future to understand the present, Evil levels current technological innovations with the blunt religious context of yesteryear, with arguably more relevant results.

In the world of Evil, manmade technology is just the latest vessel for the underworld to operate, as hilariously shown by the misinformation content farm/cryptocurrency mining operation run by a stinky horned demon “Manager” in Season 3. This exploration into the transfer of evil through technology is well established in the pilot, and sporadically serves as the backdrop for a variety of episodes throughout Seasons 1 through 3. Season 1, Episode 4, “Rose390,” dips its toes into augmented reality, while Season 2, Episode 8, “B is for Brain,” examines the implications of a “God Helmet” neurostimulator device that induces spiritual visions. Perhaps the apex of this recurrent theme, Season 3, Episode 6, “The Demon of Algorithms,” brilliantly details the algorithmic negative spiral of video sharing apps through TikTok analog “Vidtap.”

COLLIDER VIDEO OF THE DAY

It is especially prescient that the pilot episode of Evil deals with a case of technological persuasion. After being suspected of demonic possession, it is revealed that serial killer Orson Leroux (Darren Pettie) was under the online influence of Leland Townsend (Michael Emerson). When Leroux posts his murderous fantasies on an online forum, Leland encourages him with gruesome photos and convinces him to kill. Beyond setting up some key rhythmic motifs (train horns, canned margaritas, therapist appointments, and four girls talking over each other at increasingly high volumes) the phenomenal pilot episode’s conclusion highlights the terrifyingly real threat of infinite interconnectivity being used to amplify negative influence. In a conversation with Kristen (Katja Herbers), David (Mike Colter) spells out the ethos of the series:

“There are people in this world who are connectors. They influence people. They have day jobs. Teachers, stockbrokers…expert witnesses. They pretend to be normal, but their real pursuit is evil. Encouraging others to do evil. You don’t have to believe in the supernatural to know that there are people out there who do bad things and encourage others to do bad things for the sheer pleasure of it.”

The title of Season 1, Episode 4, “Rose390,” stems from its augmented reality headset subplot. Watching Kristen’s daughters after school, Sheryl (Christine Lahti) buys them AR headsets. The girls start a game called “The Haunted Girl,” likely inspired by AR horror game “Night Terrors.” It starts out like a normal horror game, with giant spiders, a murderous butcher in the bathroom, and a genuinely horrifying decaying clown figure in the bedroom. Though the narrative at this point has not yet fully crossed over into the realm of the (likely) supernatural, the sequence is a brilliant, early example of Evil’s penchant for stoking some of the most vividly shocking images on television. Upon witnessing the elderly clown on the headset, Laura (Dayla Knapp) bolts downstairs screaming. The clown (virtually) attacks her and virtual blood splatters on the screen. She lies on the floor convulsing and screaming. It’s a genuinely disturbing scene and speaks to the psychological impact of extreme media immersion.

Later on, the girls return to the game and see that user “Rose390” (Nora Murphy) wants to join the game with them. Rose manifests as a creepy little girl who leads them to a Ouija board. Rose390 leads them to spell “Hello” on the board, then to hypnotically chant “Hail, Hail, Hail, Here He Comes” as a skeletal demon emerges from the board. The Rose390 subplot works as a timely nod to the advent of immersive entertainment and highlights a viable avenue for demons to weave their way into the consciousness of those partaking in the virtual world.

Season 2, Episode 8, “B is for Brain,” follows the team as they are asked to investigate the utility of a so-called “God Helmet” that stimulates regions of the brain responsible for religious experiences. The brief use of the term “God Helmet” early on in the episode sparked a lawsuit from the creator of a real “God Helmet” device, which is actually available for purchase. In some respects, this episode can be viewed as a self-aware commentary on the series’ technological bent; for the nonbelievers who have faith after using the helmet, they are literally conflating tech with God.

The episode opens with the team interviewing subjects who had spiritual experiences with the device, ranging from a beauty that “no words can describe” to an epiphanic encounter with Keith Moon. Kristen argues that the perceived religious experiences are merely a result of the device curing patients’ depression, while David argues that the physiological effects of the machine are a result of the vision. The team tries out the device for themselves, leading to a dreamy-turned-horrific vision for Ben (Aassif Mandvi) and a vision-within-a-vision for Kristen. However, David is unable to experience a vision with the machine.

Due to the excessive ambiguity of Evil, there are scant inklings of an Anvilicious moral message to the audience. This type of revelation is typically directed at the characters themselves. After his failed vision, David speaks to Sister Andrea (Andrea Martin), confessing that he tried out the helmet. He struggles to understand why he didn’t experience any visions. Sister Andrea affirms: “Because your visions are not coming from regions of your brain. They’re coming from God.” She asserts that technology can “rewire the brain” and that he’s “lost everything he’s gained.” She reminds him of the looming threat of Leland and suggests that David needs to start over with his introspective self in order to regain his connection with God. This puts Leland’s use of technology in a new light, suggesting that only the Devil acts through technology.

“The Demon of Algorithms”

Evil earns its status as a modern-day myth when it applies a religious bent to the cultural zeitgeist. Though the human race is far past the point where, say, fantastical stories are needed to explain the sunrise, there exists far more poorly understood scientific phenomena than the unprecedented cynicism of the “post-information age” would have one believe. One striking example is the increasing integration of video-sharing apps into everyday life. Research into the effects of chronic exposure to TikTok and the like is still in its infancy, and it might be decades before the full scale of its cultural impact — negative or positive — can be adequately measured. Season 3, Episode 6, “The Demon of Algorithms,” explores whether there is a demonic influence to the algorithmic rabbit hole that fuels the video-sharing apps of today, and depicts how the TikTok-esque “VidTap” app interacts with the singular personality of each member of the squad.

The episode follows two cases related to the app. The first involves a girl named Candice (Malina Weissman) who has been livestreaming her “possession,” which involves eating glass and reciting a phrase in Latin. This is but one drop in the bucket of the possession trend, as a video search reveals more users reciting the phrase and acting out their alleged demonic takeover. (Side note: In real life, a quick scroll through the “possession” tab on TikTok indeed reveals alleged possession videos and debates on their veracity.) Candice’s case is determined to be fake, merely the result of a vulnerable mind swept up by like-chasing. While the possession itself may have been acted out, there is still a chance that the app carries a demonic influence.

The second case concerns mother Marie Taylor (Lena Hall), who has been posting a series of videos that suggest a haunting presence in her house. Her kids are repeatedly being targeted, even being slashed by the “monster.” However, the team receives unedited footage from Vidtap that shows Marie scaring and attacking her children, editing herself out of the posted videos. This revelation is far more gut-wrenching than if there had been an actual monster. To know that there can be such inhumane apathy without a demonic influence is in fact true horror.

In this case, Evil is simply holding up a mirror to the modern world. This is perhaps most exemplified by Kristen, Ben, and David’s dark descent into Vidtap. Each gets a personalized feed tailored to their personality, but the videos become increasingly negative. Kristen eventually devolves into watching videos on how to spot a husband’s infidelity, and David’s feed is filled with suicidal priests. Ben, on the other hand, endures a regular spewing of vitriol directed at him for his debunking videos. These sequences of video scrolling are eerily accurate and rival the modern classic SNL TikTok sketches in their status as a brief cultural touchstone for this mode of expression. Rather than a mere plot filler device that pats itself on the back for being relevant, Evil’s commentary on this type of technology is equally tongue in cheek, narratively consistent, and of staggering sociocultural significance.