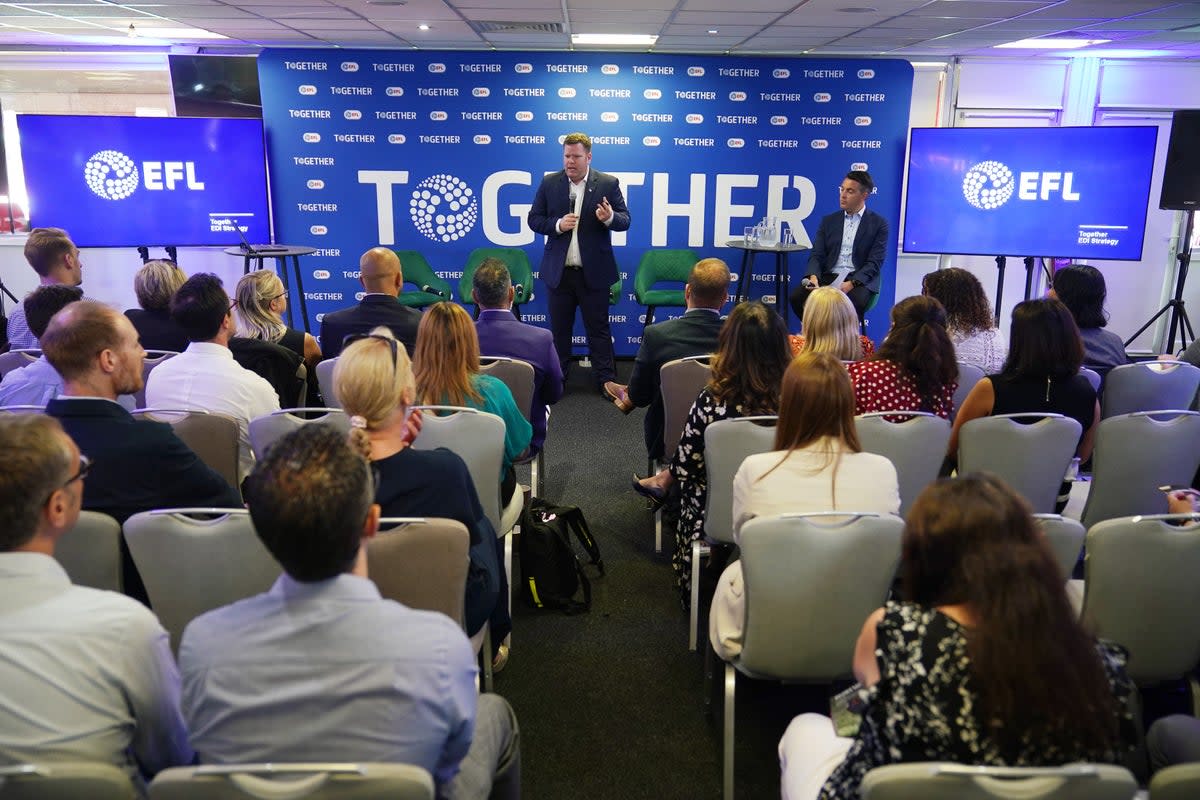 The English Football League will challenge the new Prime Minister to ensure the Government holds social media companies to account over online abuse.

Crystal Palace defender Joachim Andersen turned to police after he was bombarded with death threats and vitriol following his involvement in the incident which saw Darwin Nunez sent off in Monday’s 1-1 draw with Liverpool.

David McArdle, who oversees inclusion and anti-discrimination initiatives for the EFL, agreed rooting out bad behaviour is paramount in ensuring football remains a welcoming space for fans and players alike.

“We at the outset of when George Floyd was murdered and all that happened, we set out and said ‘that’s discrimination’,” he said.

“It’s not racism, it’s not LGBTQ+, it’s not misogyny, it’s not ableism, it’s discrimination, and we have had that voice across all different aspects of the game.

“We’ve been one of the more vocal football organisations to say if you believe that’s what you want to do, you’re not welcome. We do not want you here. And our clubs have really taken on that stance and that leadership that we have shown very early on to start to root it out of their game.

“Social media has its own challenges, but through our systems of how we monitor that, how we bring 72 clubs together to speak to the social media companies at various points of the season, we are trying to use our voice and our influence as much as we can to show these social media companies that the level of challenge that our clubs are facing, to really put that onto them, we work with our clubs, we work with our players to try and ensure that they are best supported as much as we can.

“We need to ensure that any point that comes through Government legislation, whatever that might be, that football has an impact on and that we’re in a position that our voice can be listened to and our voice is as relevant as it can be.

“Whenever the Government has a voice we will do that. Through the Online Safety Bill and the fan-led review, we’ve been very, very vocal.”

The Online Safety Bill, a new piece of legislation designed to impose a greater duty of care on tech companies to tackle abuse and hate on their platforms, was due to be discussed in Parliament in July but progress was delayed until the Conservative Party selects its new leader.

The 400-page document, according to Kick it Out chair Sanjay Bhandari, includes a mechanism for fining companies who are in breach of the bill, a changed definition of ‘harm’ that could help prevent trolling and pile-ons, and a specific communication offence around rape and death threats.

“When I talk about abuse in football I don’t just talk about footballers, the most high-profile ones,” explained Bhandari, speaking at the launch of the EFL’s new diversity and inclusion strategy.

“You don’t necessarily want to be a female pundit in football either, because you get these kinds of threats all the time.”

The bill also includes language that will put more onus on companies to prevent users from seeing hateful messages, which, Bhandari said, will be critical when dealing with the flood of content from overseas.

“The criminal offences will have no impact (on them),” he said. “You have to put an obligation on the social media companies to prevent you from seeing that stuff in the first place, and that’s what the bill does.”

The Online Safety Bill, which has been welcomed by both Kick it Out and the Football Association, is currently in report stage and discussion is expected to resume this autumn.

We need to ensure that any point that comes through Government legislation, whatever that might be, that football has an impact on and that we’re in a position that our voice can be listened to and our voice is as relevant as it can be

Ultimately, however, Bhandari stressed it should not require legislation for companies to take action.

“They don’t have to wait. They can do stuff now,” he said. “Some of those companies are (worth more) than a nation state. A lack of resources is not an answer.

“They have the resources. There’s no money in it. That’s the reason they don’t do it, so they’re only going to do it if they’re forced to do it by legislation.

“Use your voice, use your platform, to stamp your feet and say we want this legislation in.”