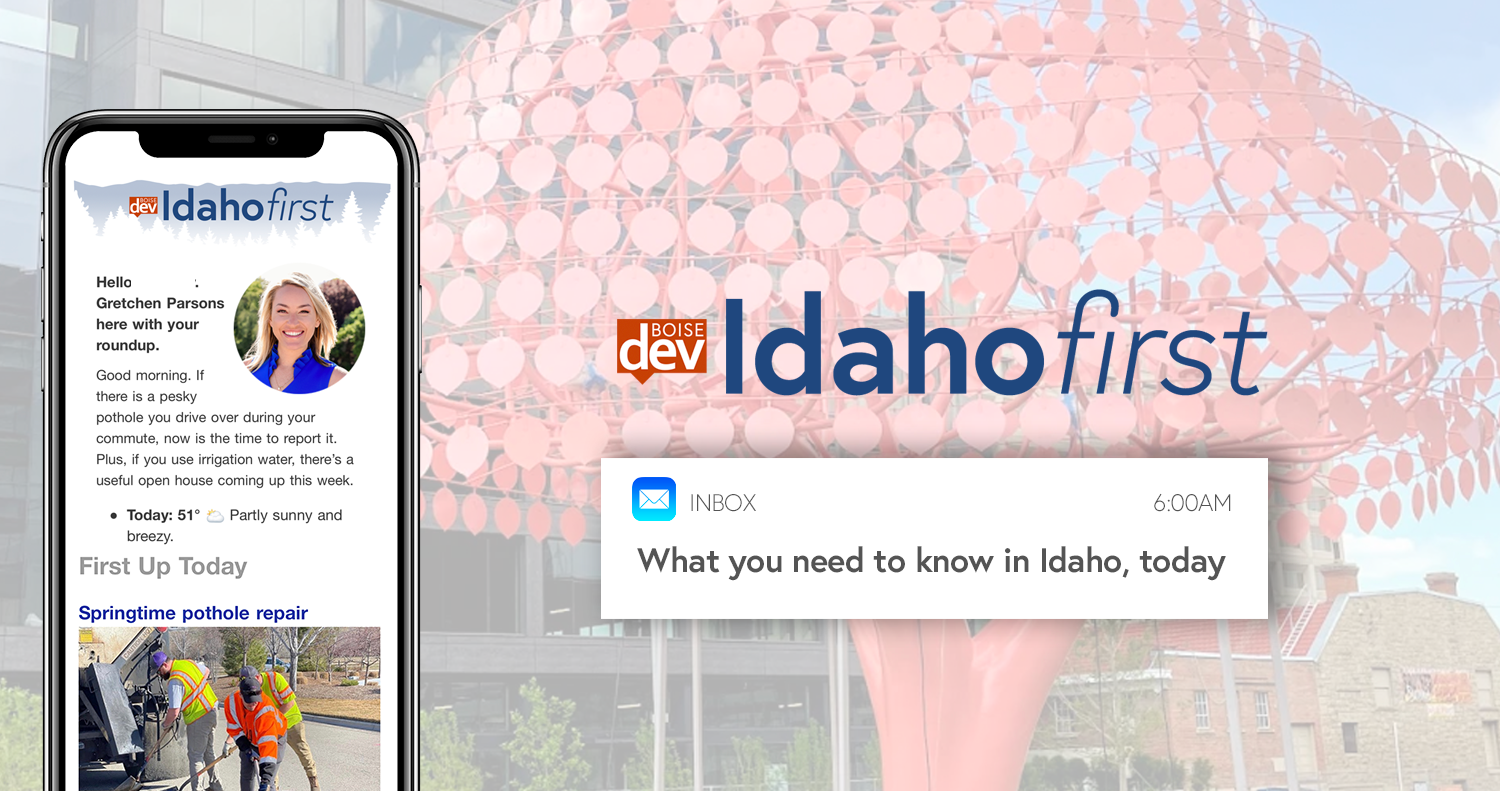 It’s Tuesday – Don Day in for Gretchen this morning.

Gretchen is enjoying a well-deserved week off! Autum Robertson and I will try to keep the Idaho First ship steaming ahead this week. Today, we’ve got the new chapter for the skateboarding Idaho TikTok star, an investigation into irrigation billing practices and more.

Today at the Fair!

No one likes to see a lien filed on their home or property. But what happens if a lien is filed for a service or product you don’t – or can’t – even receive?

That’s what happened to Lois Fish, who lives in West Boise.  She opened her mail and found a bill for $633.27, and a notice that she was delinquent on her account and a lien had been filed.

This summer, BoiseDev’s Margaret Carmel has been investigating the Shavrer’s Lateral Water Users Association.  The organization with the peculiar name has filed a series of liens on properties in its purported service area.

That service? Canal water. But not all the homes can receive the water. And residents are raising questions about billing and notification practices.

After Margaret started her work, she asked the Idaho Attorney General for comment. While the AG wouldn’t answer our questions — days later, it sent its own questions to the Shavrer’s folks.

As Margaret reports, others in the area have, in some cases, been fighting for years. Read her full investigation on BoiseDev.

(Disclosure: The Fair is this week’s Idaho First sponsor, but it doesn’t have a role in the placement or content of this story.)

All the usual events are lighting up the fairgrounds on Chinden, with the carnival, grandstand concerts, and more. Tonight, Ja Rule and Ashanti will take over the old Les Bois Park track ay 7:30. Pat Benetar & Neil Giraldo are featured tomorrow, Stone Temple Pilots Thursday and Billy Currington headlines Friday. It’s a bit of everything, and concert admission is included when you buy fair tickets.

Food. My wife and I were out there last night and sampled some of our favorites, including the yearly Pronto Pup. Today is $2 Taste Test Tuesday – with many fair vendors offering a menu item for just two bucks, so you can try several different options!

The core of the fair is really agriculture. This morning, the 4-H & FFA kids will show gymkhana horses from 8am-10am. Small animal round robin goes from 10am to noon.

And it wouldn’t be a fair without those slightly out-there events. Today the Axe Women of Maine will showcase their competitive cutting skills at 2pm. Or, see the Jet Pack Circus at 2:30pm — which is exactly what it sounds like.

Before vacation, Gretchen wrote: A native Idahoan and the state’s most viral Tik Tok star made it to the big screen.

Nathan Apodaca of Idaho Falls scored a role in the second season of Reservation Dogs, a Native American comedy-drama series on FX and Hulu. The second season premiered August 3.

Apodaca rose to internet fame in 2020 after creating a now-famous TikTok of him skateboarding to work after his car broke down. Apodaca coasts down the side of what appears to be the interstate while casually swigging cran-raspberry juice straight from the jug and singing the lyrics to Fleetwood Mac’s 1977 hit “Dreams.”

The video has racked up more than a billion views and 13.4 million likes. Within weeks of posting, “Dreams” had a 374% jump in sales and an 89% jump in streams, according to Billboard. Mick Fleetwood and Stevie Nicks even created their own versions of the TikTok video. In 2021, Apodaca was part of the lineup for President Biden’s Inauguration celebration.

While Apodaca is a native Idahoan, his mother grew up on the Wind River Reservation in Wyoming and is Northern Arapaho. You can learn more about his role in Reservation Dogs here.

The new Meta (aka Facebook) data center is off on its own in a rural part of the county. The Silicon Valley giant is paying extra for services, as Idaho Press’ Sydney Kidd reports on BoiseDev.

Autum Robertson has the scoop on another big subdivision on the drawing board in Meridian.

It’s the second time in just a few weeks that Starbucks has applied for a new location along the I-84 corridor in Boise. I’ve got the story over on BoiseDev.

Pet of the Day

Back when Gretchen and I were putting together the ideas for Idaho First in 2021, we knew we wanted something engaging each day. We brainstormed tons of ideas and thought, ‘why don’t we try a pet of the day?’ I never expected this to take off the way it has – with thousands of pet photos submitted (we wish we could feature more!), and it’s a treat each day for me personally to see the pet.

Today, meet Piper. Nicole Howell sent this pic along, saying, “she is the sweetest 16-week-old sheepadoodle walking around the lake in Eagle.” Good morning Piper!

Submit your pet’s photo here, and we may feature it Monday-Thursday! Plus, our friends at Zamzows will send along a prize to the winning pet (owners)!