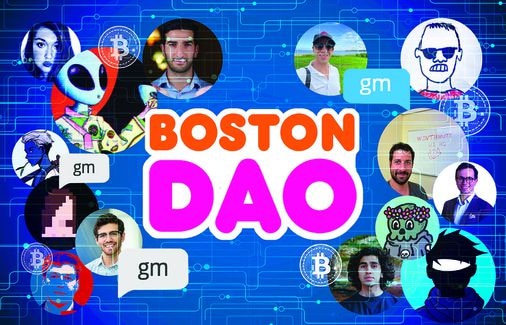 The font of the Boston DAO’s logo resembles the branding for Dunkin’ (I’m told it’s under legal review), so people often accompany their “gm” message with a photo of their iced coffee. This morning ritual is one of the ways the region’s burgeoning crypto community is becoming a real business group.

The Boston DAO considers itself a “decentralized autonomous organization,” a group that’s governed by its members rather than a central authority.

The best way to understand the Boston DAO is to think of it as a glorified group chat. When it started, that’s really all it was — a place for people to talk about crypto.

Jake Lynch, 27, a core contributor of the group since it started earlier this year, said the Boston DAO has grown exponentially over the past few months. It has some 350 members — spanning chief executives, venture capitalists, and college students — and recently published a 1,000-word manifesto, laying out its focus on policy, philanthropy, events, and community.

“Most of the progress has been around deciding how the organization will operate and what its goals will be,” Lynch said. “Without guardrails, it’s kind of nebulous and nobody really knows what’s going on.”

So, what is going on?

Similar to how there are trade organizations that represent the interests of the state’s restaurant, beer, or biotech industries, the Boston DAO is hoping to promote the local crypto and blockchain industry, commonly referred to as “web3.” The DAO is working with state legislators to help create a state blockchain commission, as well as a workforce development program.

Unlike most business organizations, it doesn’t have a leader; right now, the group has about 25 core contributors, who spend two to five hours a week on DAO-related matters.

It’s early, but the Boston DAO wants to play a major role in cementing Boston as a world hub for crypto and blockchain tech. Though the group doesn’t have any funding yet, Lynch said it could potentially do an NFT sale to raise money for a treasury. And its manifesto hints that it could eventually be an investor and incubator for Boston-area web3 companies.

The group’s community norms could seem strange to anyone looking in from the outside.

It’s common to see venture capitalists and CEOs use NFTs or avatars as their profile photos, instead of professional headshots. Meet-ups are organized through Partiful, instead of Eventbrite or Google Calendar. Messages are sometimes riddled with crypto slang.

Of course, these aspects help build community within the local web3 world. But as Dave Balter, chief executive of Flipside Crypto, pointed out, it can also make it challenging for Boston’s broader tech community to find out — and understand — what’s going on.

“The action is sort of in these quiet Telegram [groups],” Balter said. “A lot of really smart people are building things that no one is seeing.”

Today, the Boston DAO might still seem (to most people) like a group chat. But Lynch pushes back on that notion. A “group chat would not necessarily have a long-term intention of changing Boston’s landscape for innovation and web3,” he said.