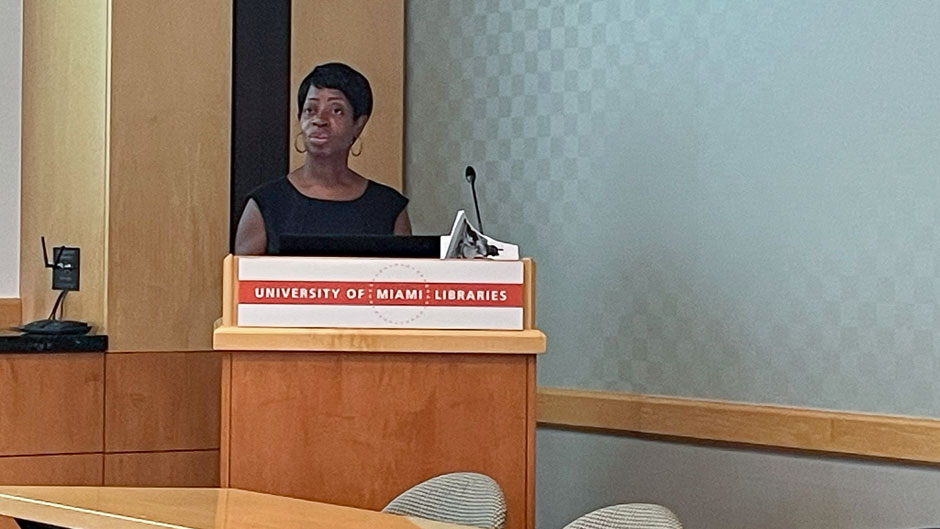 Angle Bush, who founded an organization to increase the presence of Black women in technology, spoke at the University’s Richter Library on Tuesday about ways that companies and educational institutions can foster diversity, equity, and inclusion programs.


She grew up wanting to create a robot named Usher that would serve her hot cocoa.

But much later, after working diligently in the oil and gas industry, Angle Bush was at a technology conference when she looked around and saw very few faces that looked like her own. Since these are the people developing the technology to automate decisions in the future, Bush saw that as a problem.

“I did not see a full reflection of myself or what was needed to represent access and opportunity to people of color,” Bush told a group of students and faculty and staff members on Tuesday afternoon at an event hosted by the University of Miami’s Institute for Data Science and Computing and the University’s Ethics Programs. “People often say that artificial intelligence is the fourth industrial revolution and in that moment, I said, ‘Surely you can’t have a revolution without Black women.’”

Shortly after, in 2020, Bush left her job at Shell in Houston, Texas, to found Black Women in Artificial Intelligence (AI), an organization that hopes to educate, engage, embrace, and empower this segment of the female population into artificial intelligence careers. Today it has members on five continents, and Bush is hoping to open smaller chapters at colleges to combat the meager number of Black women in the industry. She also has relationships with large corporations like Amazon, CapitalOne, Nvidia, and others who want to attract more Black women to their companies.

Bush spoke to a group of more than two dozen at the Otto G. Richter Library and explained that diversity, equity, and inclusion programs are only meaningful if leaders are willing to confront the harsh realities of the small percentage of all minorities among their companies’ ranks.

“People need to ask things like ‘Where are you as a company or organization? Do you have 1 percent or 12 percent minorities in your organization? Where would you like to be? What’s your capacity for becoming what you say you want to be? And why do you want to do it?’ ” she pointed out. “Before you can get to diversity, equity, and inclusion programs, that self-reflection needs to take place.”

Once these conversations happen, realistic goals are set, and new hires are made. Leaders then need to be open to giving these new employees shared power, authority, and influence, Bush added. “Oftentimes there’s a discussion about letting people [of color] have a seat at the table,” she said. “A seat at the table without power and authority is just taking up space.”

Lastly, Bush said companies need to build trust among their existing employees, so that new workers know their leaders are committed to a mission of inclusion and to helping their new employees succeed. Bush said she often reminds business leaders about the importance of retention and how happy employees will tell their friends and colleagues about a positive experience.

Throughout her talk, Bush asked audience members about their own experiences; what motivated them to attend; and why diversity, equity, and inclusion is important to them. Miller School of Medicine graduate students Alex Sanchez Covarrubias and Ayodele Omotoso attended the talk with their advisor, Sophia George, an associate professor of obstetrics, gynecology, and reproductive sciences, and both said that Bush’s message resonated with them.

“In my experience in computational biology, there are few minorities doing data science and I think institutions should encourage minorities to join this field in general, so that it is more representative,” said Covarrubias, a doctoral candidate in cancer biology. “Sometimes when I’m troubleshooting code, if I ask someone else for help, there’s other things they notice that I don’t. So, as you increase the diversity in the field, you have different backgrounds that can help you to use new methods to reach your goal.”