SHIB hit an all-time high of $0.00008299 on Wednesday night, as per CoinGecko data. At one point during the day, SHIB had flipped DOGE in terms of market cap.

Why It Matters: Freddie Evans, a sales trader at GlobalBlock, a United Kingdom-based digital asset broker, noted that BTC fell below the $60,000 support.

“Investors have been on edge expecting a correction as the markets have looked over leveraged,” said Evans in an emailed note.

“The drop has been predicted by many analysts and provides an opportunity to those looking to buy the dip, meaning it could be that this retracement is short lived and we head back above $60,000 before too long.”

A leverage wipeout took place on Wednesday with the selloff resulting in $536 million worth of liquidations within one hour, as per Bybt data. A total of $508.65 million longs were liquidated and $28 million shorts were liquidated in the same period.

While base-layer coins like Solana, Avalanche, and Near Protocol got hit hard by the latest market decline, Decentralized Finance or DeFi tokens like 1Inch Network and AAVE got a chance to shine. 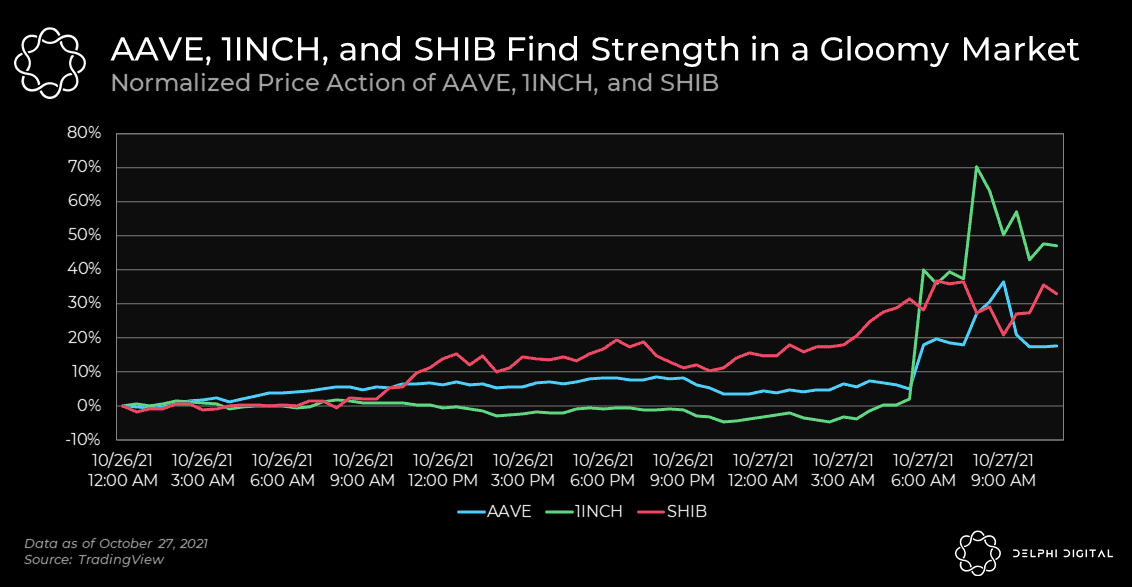 Resurgence Of AAVE, 1Inch, and SHIB Charted By Delphi Digital
“1INCH price action today was overwhelming and likely catalyzed by the token’s listing on Korean exchange Upbit. AAVE was also listed on Upbit, and within an hour of the listing, both tokens had already established a “Kimchi premium,” noted Delphi Digital, an independent research firm.

Meanwhile, one of the reasons behind the recent spike in Shiba Inu is the surge in futures open interest on exchanges such as OKEx, FTX, and Huobi, reported Cointelegraph.

Marcel Pechman, a markets analyst, told Cointelegraph that the “open interest seems to be following the price pump instead of an actual increase.”

“Longs are in huge profit, so it’s easier for them to keep buying spot and pushing the price up. There seem to be no ‘real’ short-sellers, only market makers. Had there been huge liquidations, the open interest would have gone down,” said Pechman.

Read Next: Bitcoin Is Still Minting Millionaires, And So Is ETH