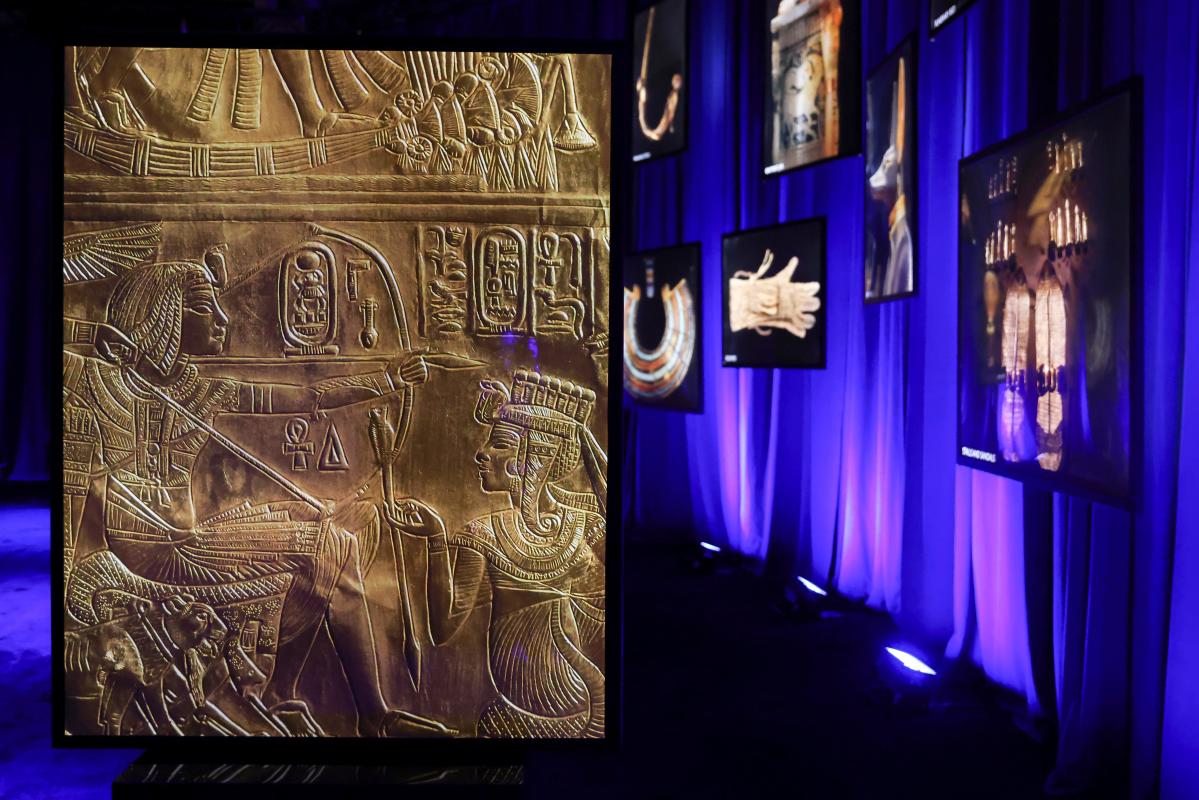 NEW YORK (AP) — A new exhibit celebrating the ancient pharaoh King Tut is about to land in several cities with a very modern twist – taking a digital look at the boy king for the Instagram age.

Not a single golden treasure or artifact from the tomb is on view at “Beyond King Tut: The Immersive Experience.” Instead, high-resolution digital projections of Tutankhamun’s world are splashed along high walls and floors as visitors walk through nine galleries that chart his life, death and times.

“The culture of ancient Egypt and modern Egypt is one that we know has been endlessly fascinating to our audiences, not just in the United States but around the world. So the question became, how do we tell this story through a 2022 lens?” says Kathryn Keane, vice president of public experiences for the National Geographic Society, which is helping produce the show.

The exhibit coincides with the 100th anniversary of the tomb’s discovery, a watershed moment in archeology. “Beyond King Tut” opens Friday in New York City and is already open in Washington, D.C., with openings in Los Angeles and Vancouver planned for Nov. 4, and plans for Atlanta, Houston, San Diego and San Francisco.

The New York show is at the massive Pier 36 event space – once home to 25 basketball courts – and uses 25,000 square feet to show Tut’s burial chamber, explore his family tree, how he was prepared for mummification, the treasures he was buried with and even his impact on popular culture. An introductory film presented in an archeologist’s tent starts the process off, and all of it is very social media friendly.

There are a few replicas of the 5,400 items found in Tut’s tomb, including his modest throne and a sleek Egyptian sailing vessel, whose sail provides a screen for projections. A block of stone becomes his shrine, a place where projections show his various coffins and his magnificent golden burial mask. Visitors can also play a board game that ancient Egyptians enjoyed – one of five board games found in his tomb –  called senet, a sort of precursor to backgammon.

RETURNED ARTIFACTS: US museums return 31 African bronzes that were stolen over one hundred years ago

“I always think it’s interesting, particularly for kids, to show them that people 3,000 years ago were maybe not all that different than they are,” says Keane. “It helps audiences connect with a time in history that is so long ago that it’s almost hard to imagine.”

The exhibit culminates in a massive room and a swirling, vivid, even trippy animated sequence that traces what ancient Egyptians believed was Tut’s fraught path to the afterlife. Following the formal immersive experience, guests who elect to pay extra can strap on VR headsets to watch the film “Tutankhamun: Enter the Tomb,” narrated by Hugh Bonneville of “Downton Abbey” fame.

Ever since English archaeologist Howard Carter discovered Tut’s intact tomb in 1922, the pharaoh has captured the public’s imagination. The curious lined up for hours to see the U.S. tour in the 1970s, which drew more than 8 million people and inspired pop culture tributes such as Steve Martin’s Tut parody on “Saturday Night Live.”

Mark Lach, the creative producer for the new show who has previously toured with artifact-heavy Tut exhibits, says the boy king “probably would have gotten lost in the pages of history if it wasn’t for this incredible discovery 100 years ago.”

He became king at around 9 and died mysteriously when he was 18 or 19, found in a modest tomb not picked apart by graverobbers. Lach says everything about Tut has “the makings of that kind of perfect storm of intrigue.”

“Beyond King Tut” is produced by Paquin Entertainment Group and Immersive Experiences. The technology they’ve harnessed comes at a key time for Tut artifacts.

Egypt, struggling to revive tourism battered by years of political turmoil, has been eager to gather its archaeological treasures inside the country. A new museum near the pyramids will hold the complete Tutankhamun collection, meaning traveling exhibits are unlikely for many years.

“I’m so happy for Egypt, for the folks that visit Egypt, but the folks that can’t go to Egypt, I think this exhibit is the next best thing and brings these artifacts to life in a brand new way,” says Lach.

Immersive experiences are all the rage these days, with traveling, projection-driven exhibits of Vincent Van Gogh, Gustav Klimt, Frida Kahlo and Claude Monet, just to name a few. There is even a rival Tut exhibit called “Immersive King Tut” touring the U.S.

Making this immersive Tut exhibit required a little more thought than the ones that celebrate the painters, said Lach. “You kind of lose yourself in the art, and the art comes alive, if you will,” he said. “As we sat down with this one, we thought, ‘This really needs and deserves more of a storyline, more of a progression – a beginning, middle and an end.'”

Keane agreed, hoping to move the medium forward by adding more educational elements. She says the Tut experiment has whetted the appetite of National Geographic to do more such digital-forward projects.

“I think it’s our hope that we can lead the way a little bit and that museums will start to adopt some of these techniques in their own storytelling, and make museums more accessible to people because that’s the goal: to bring in bigger, more diverse audiences.”