In 2018, Nikolai Mendiaev bought his first bitcoin using a peer-to-peer platform called LocalBitcoins. Mendiaev lived in Elista, a town of about 100,000 people in southern Russia, and he was wary of going through the know-your-customer process at a centralized exchange. As a software developer and (relatively) early cryptocurrency adopter, Mendiaev occasionally had friends and family asking him how they could buy bitcoin.

“It was a rare case, but it happened,” Mendiaev says.

Then, in March, Russian President Vladimir Putin declared war on Ukraine. As Russian tanks traversed Ukraine’s vast eastern plains, Mendiaev moved to Tbilisi, Georgia. He also found more Russian people coming to him with questions about how to get into crypto. Most of them wanted to send money across the Russian border, Mendiaev says. Mendiaev sent most of them to Binance despite his issues with centralized exchanges. He felt that the platform’s own peer-to-peer service would make it easy for his friends to make cross-border transactions.

Russian traffic to crypto exchanges skyrocketed in the early days of the Ukraine invasion, as Russians traded billions of dollars worth of rubles for bitcoin and tether in March and April. Volume has slipped in recent months, but Russia remains a major market for any crypto exchange. It’s also become a more complicated market, as sanctions and strict responses by payment providers have made it more difficult to purchase crypto in Russia. The story follows a familiar framework, as citizens of emerging countries flood into crypto in times of instability. But, those purchasers also face the challenges of living in a country whose weak currency can make it difficult to purchase bitcoin, tether or any other crypto.

“The most important quality for an exchange is just that it’s available for Russians because it’s hard to find good exchanges now,” Mendiaev says.

Binance has dominated the field of cryptocurrency exchanges in Russia for years. But competition increased dramatically after the war’s start, and Binance has watched its market lead shrink. In August 2021, Binance controlled 62% of Russian traffic to crypto exchanges, according to SimilarWeb, a web analytics service. That fell to 33% just before the invasion, popped up to 44% in March, and has since declined to a record-low 27%.

Exchanges Bitrue and Bybit are the only others bringing in at least 10% of the web traffic, but it’s unclear how much trading volume they control.

“Binance is No. 1, but then there’s a bunch of these really tiny exchanges that likely only have very limited volumes,” says Clara Medalie, director of research at the digital assets data provider Kaiko in Paris. On Aug. 2, tether/ruble trade volume reached $2.14 million on Binance, while BitGlobal had the second-highest total, barely eclipsing $400,000.

As Binance’s share of the Russian pie is shrinking, the size of that pie is also diminishing. Trade volume between tether and the ruble peaked in early March, hitting 4.3 billion rubles on March 7. Bitcoin/ruble volume reached over 2.1 billion the same day. Volume has been much smaller since then, generally in the tens and hundreds of millions of rubles each day.

Pinpointing the exact cause of that reduction is difficult, though the fallout from sanctions because of the Ukraine invasion is a logical place to look. The impacts are largely indirect. After several actions by the EU and the U.S. ​​Office of Foreign Assets Control (OFAC), about 1,200 Russian nationals have been sanctioned.

Some observers predicted that crypto would allow Russian oligarchs to evade sanctions, but evidence to support that claim seems not to have emerged. The spike in March and April activity was mostly driven by individuals fleeing the plunging ruble. Crypto exchanges can still legally operate in Russia as long as they aren’t aiding sanctions evasion by any of the listed individuals.

“Exchanges, they’ll never go out of their way to limit users. They’re always going to follow the law, but if the law lets them do it, they’re going to do it,” Medalie says.

“The crypto innovators are tech companies…Tech-oriented companies want to drive the market by being bold to be innovative,” says Chris DePow, senior policy advisor at the blockchain analysis firm Elliptic. “They are willing to deal with more risk.”

Still, many risk-averse financial firms, especially those outside the crypto sector, closed their Russia businesses to avoid potential backlash, legal or otherwise. For instance, Visa and Mastercard suspended most of their Russian operations in March, a challenge to locals who used those companies’ cards to purchase crypto on major exchanges. Banks and other financial institutions including Citigroup, Goldman Sachs, JPMorgan Chase and Deutsche Bank have also reduced services to varying degrees.

Those banks, payment providers, and other financial institutions withdrawing from their country make it harder for everyday Russians to access crypto markets.

“There has to be a nexus between crypto-oriented businesses and traditional banks, again, that cash-in, cash-out point,” says Daniel Tannebaum, global head of sanctions at Oliver Wyman, a management-consulting firm.

In the days following March and April sanctions, crypto exchanges rolled out a variety of strategies for reducing risk at their Russia operations. Binance closed all Russian accounts worth more than 10,000 euros, giving account holders time to remove funds. Other exchanges had similar procedures, working with sanctioned individuals to withdraw their money from their platforms.

Russia’s spike in interest may be surprising, but it follows a long-known trend of crypto thriving in emerging markets. In a Chainalysis report on global crypto adoption, the U.S. was the only country in the top 20 not considered an emerging market.

“People in emerging markets have always found ways to move their capital out of the country to seek a more stable currency,” says Sarah Krepps, a professor of international relations and technology at Cornell University. Even though most cryptocurrencies haven’t been particularly stable in 2022 — bitcoin is down more than 50% year-to-date — that hasn’t slowed the flow of money from rubles into them.

“In Russia, [people] are also trying to get their money out of the system to relatives and friends elsewhere,” Krepps says. “People in these countries where the economy is unstable or unpredictable are trying to shelter it from that volatility.”

Russians have primarily done this by moving their money into tether (USDT), a stablecoin. Russians favored bitcoin for much of 2021 when crypto purchases were driven by speculation on prices. A similar movement occurred in Turkey over the past several years, as inflation wreaked havoc on the country’s economy. Turkey is the only country with a higher volume of traffic to Binance than Russia. 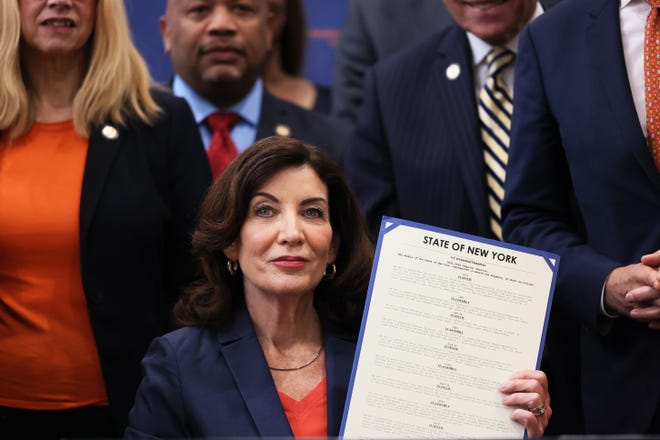