November 30, 2022 marked the release of an artificial intelligence (AI) prototype called ChatGPT which has surged in popularity for its ability to answer complex questions and produce detailed, human-like content. It is the latest evolution of the GPT – or Generative Pre-Trained Transformer – a language model that can create new content based on input content called “Training Data.”

An article in Vox explains its inner workings:

At its core, the technology is based on a type of artificial intelligence called a language model, a prediction system that essentially guesses what it should write, based on previous texts it has processed. GPT was built by training its AI with an extraordinarily large amount of data, much of which comes from the vast supply of data on the internet, along with billions of dollars, including initial funding from several prominent tech billionaires, including Reid Hoffman and Peter Thiel. ChatGPT was also trained on examples of back-and-forth human conversation, which helps it make its dialogue sound a lot more human, as a blog post published by OpenAI explains.

Over the last week, humans have been testing the bot and enjoying the kinds of things it can produce. It has been directed “to make jokes, write TV episodes, compose music, and even debug computer code.” “Most notably,” according to Forbes, “ChatGPT has been able to generate intricate Python code and write college-level essays when given a prompt.” This has raised concerns about students’ using ChatGPT for homework assignments, as it has even surpassed filters on Turnitin.com, a popular academic tool for anti-plagiarism.

One post on Twitter by a man named Thomas H. Ptacek gained popularity when he prompted ChatGPT to “write a biblical verse in the style of the king james bible explaining how to remove a peanut butter sandwich from a VCR.” 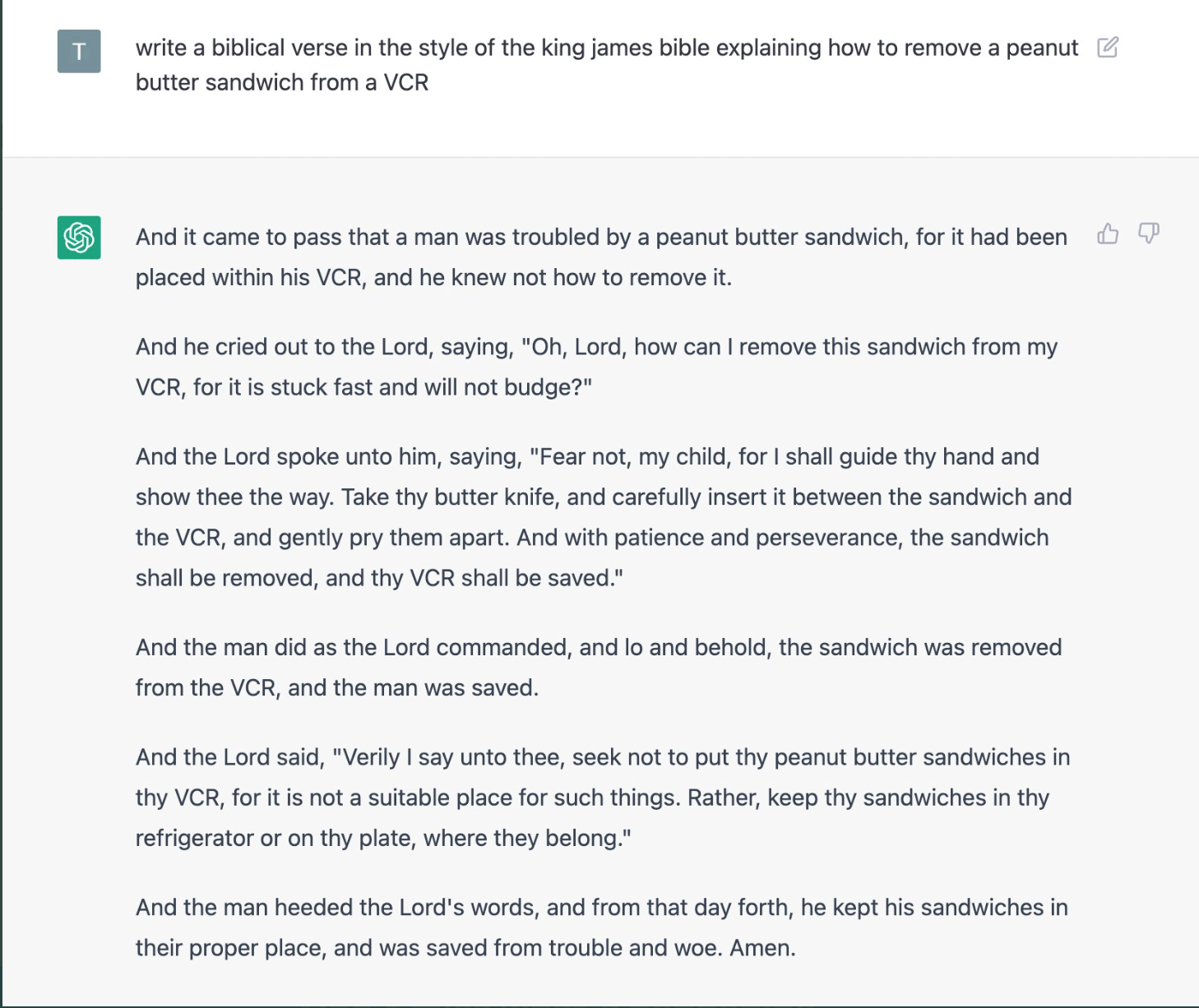 An Adventist pastor from the Oklahoma Conference, Wes Via, recently joined the trend by prompting ChatGPT to “write a 1000 word sermon on Revelation 14:7 from an SDA perspective.” His surprise was matched by comments from other pastors as ChatGPT delivered a remarkably theologically accurate sermon. (See full sermon below.)

According to The Guardian, “there has been speculation that professions dependent upon content production could be rendered obsolete, including everything from playwrights and professors to programmers and journalists…. However at its current stage, the chatbot lacks the nuance, critical-thinking skills or ethical decision-making ability that are essential” for this.

In response to criticism that ChatGPT sometimes gets answers wrong or presents misinformation as fact, OpenAI concedes that “fixing this issue is difficult because there is no source of truth in the data they use to train the model.”

Before you go…Your generosity is the reason we can offer accessible, independent journalism and warm, encouraging community to Adventist Today readers worldwide. Exciting growth like the amazing Spanish and Portuguese-language expansion on our AT Latin America platform can only happen because you give.
It’s 2022 Year-End Fundraiser time at AT and we are counting on YOU to help us continue growing. We’ve significantly grown the depth of our news reporting as well as our international reach in 2022.
AT is constantly recruiting writers and commentators from around the world. We believe that AT’s accessible, independent journalism can help the Adventist Church be the best it can be
Thank you for giving generously to build the future of AT.
Donate to AT by clicking here: atoday.org/donate