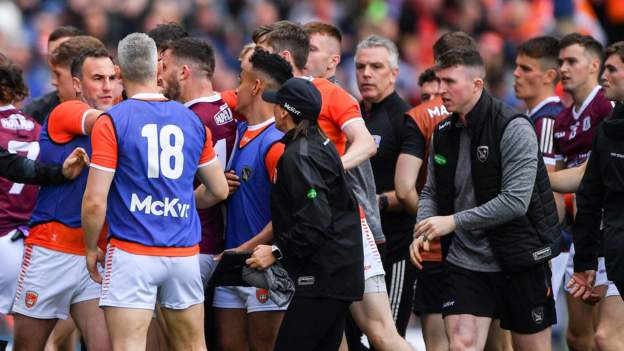 Armagh club Clann Eireann have hit out at the “unjust and unfair” social media “vilification” of their player Tiernan Kelly following his involvement in the melee between Armagh and Galway.

The GAA’s Central Competitions Control Committee (CCCC) on Tuesday began its investigation of the brawl with sanctions expected to be handed down later this week.

Referee David Coldrick issued red cards to Armagh co-captain Aidan Nugent and Galway skipper Sean Kelly in the aftermath of the melee, which broke out in front of Croke Park’s Cusack Stand tunnel seconds after Armagh had forced the game into extra-time.

However, much of the fallout has focused on the incident involving Tiernan Kelly – a non-playing member of the Armagh panel – and Comer.

Defending Kelly in a strongly-worded statement on the Lurgan club’s Facebook page, Clann Eireann said: “As a club, the well-being of our playing members is of the utmost importance to us.

“As a club, and a family, we will support and protect Tiernan and his family from those who don’t know him.

“The vilification of Tiernan on social media over the last few days has been both unjust and unfair.

“Tiernan has been, and always will be, a great ambassador for our club. Anyone who knows him, will know the dedication and hard work he puts into both his club and county, along with the time he spends coaching and encouraging our young Gaels.

“His dedication to the GAA, both on the field and behind the scenes, has been nothing short of amazing.

“One moment does NOT define a man. The GAA will have its due process regarding the issue. We would ask people to let this process take place before making judgement.”