While the iPad has long been the world’s most popular tablet, newly published market research helps put Apple’s lead into perspective.

A big caveat is that Apple no longer reports iPad unit sales in its earnings results, forcing IDC to estimate shipments based off the iPad quarterly revenue number that Apple does share. As a result, other research firms like Strategy Analytics and Canalys have different iPad shipment numbers for the second quarter, but it doesn’t change the narrative, as both have Apple with a significant lead over Samsung and Amazon. 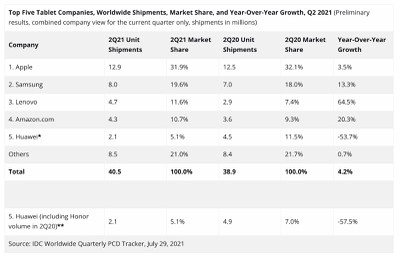 iPad sales continued to surge last quarter as many people continue to work, learn, and communicate with others remotely. According to Apple CEO Tim Cook, the ‌iPad‌ had its best June quarter in nearly a decade, with the company reporting iPad revenue of $7.4 billion in the quarter, a significant increase over $6.6 billion in the year-ago quarter.

The launch of a new iPad Pro with an M1 chip and a mini-LED display on the 12.9-inch model likely also bolstered sales during the quarter.