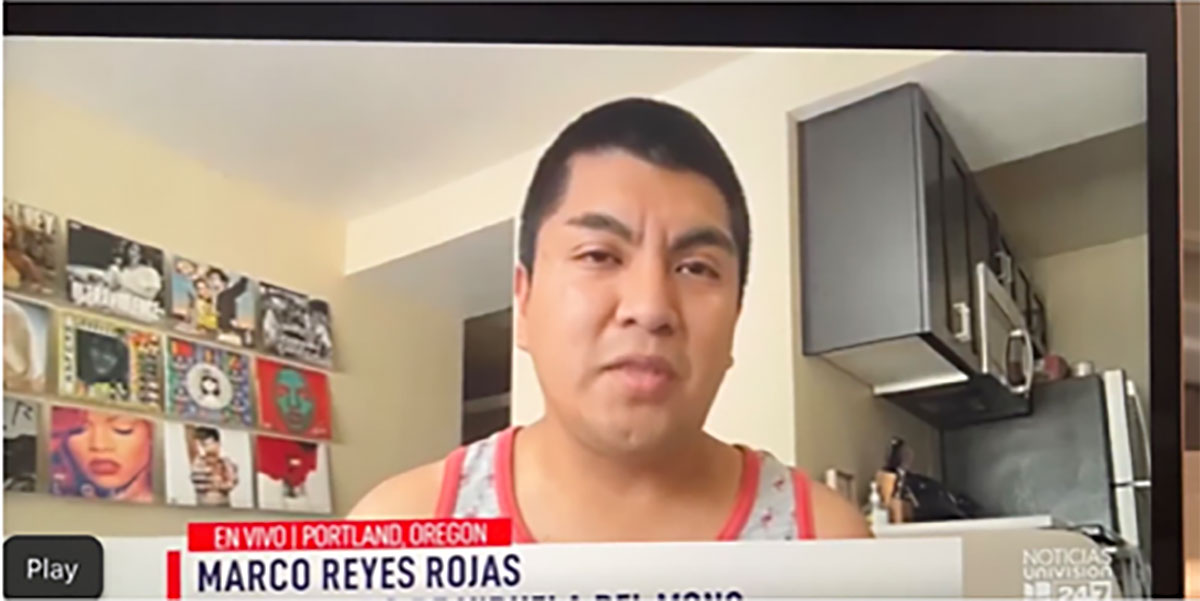 A preschool teacher in Portland, Oregon, who is the recipient of thousands of dollars in donations after coming forward about contracting monkeypox, has been deemed a “serious danger to the health and safety of children” following the revelation of a disturbing social media history firsts investigated by Newsweek.

Marco Antonio Reyes Rojas was first featured on local television late last month where he talked about the challenges of contracting monkeypox and needing to isolate. The 30-year-old Mexican-American, who is openly gay, shared photos of the pustules and rash he developed. He had previously been featured in the local press for his political advocacy on behalf of illegal foreign nationals living in the U.S. On social media, he blamed the United States for his suffering with monkeypox.

“This country really sucks,” he wrote on Facebook. “Leaving its people to fend for themselves and asking the community to help. It’s been super hard navigating living with monkeypox.”

His story and the accompanying GoFundMe campaign where he identified as a struggling preschool teacher resonated with many Americans, who donated thousands of dollars. His story was further amplified by the Spanish-language media. “Hispanic teacher from Oregon is infected with monkeypox and makes an urgent appeal to the community,” reads the People en Espanol magazine headline. He was also interviewed by Univision Miami and he personally thanked a GoFundMe employee for helping to connect him to the press.

The media blitz worked. Within days, over $7,000 was quickly raised for the preschool teacher who works at the Fruit and Flower Child Care Center in Portland. But after Newsweek requested comment from the state education department on Reyes Rojas’s social media posts, the State of Oregon issued an emergency order of suspension immediately barring him from providing care to children.

“OCC [Office of Child Care] has determined that the Individual is not suitable for enrollment in the Registry and that Individual poses a substantial threat and serious danger to the health and safety of children and suspended the Individual’s enrollment from the CBR [Central Background Registry] effective August 19, 2022,” the order reads.

The emergency suspension order alleges Reyes Rojas “has posted sexually explicit and highly concerning posts about his physical and emotional state while working with child care children on his personal social media account.”

On June 30, he announced he was going into sex work by creating accounts on Only Fans and Just for Fans. “This body needs to be exposed,” he tweeted. On July 18, he tweeted that he’d been fantasizing about oral sex “last night at work.” Reyes Rojas’ account features over 500 images or videos of pornographic content showing him having sex with other men, masturbating or displaying his genitals. Most of the images partially hide or obscure his face but many feature him in a living room home arranged with album artwork from pop singers. That same room and music artwork can be seen in his public media interviews and photos posted on his fundraiser.

A senior legal and compliance specialist for the Oregon Department of Education asked Newsweek’s reporter for evidence of Reyes Rojas’ posts after the agency was reached for comment, which was provided. The emergency suspension order
was issued by the state 48 hours later following their own investigation.

Reyes Rojas declined to comment in a text message and also said he did not have an attorney who could comment. “I’m not interested in speaking with you or any other outlet at the moment,” he said.

When Newsweek called the Fruit and Flower Child Care Center, a woman who identified as the center’s director refused to give her name or comment about Reyes Rojas. In September last year, Reyes Rojas posted multiple photos of a classroom on his Instagram. “It’s weird to say that I have a classroom of my own,” he wrote. “It’s going to be a crazy school year!” Photos on Facebook show he was working there as early as 2018, though its unclear if the employment has been continuous.

The state suspension order against Reyes Rojas says he “engaged in inappropriate behavior while working at Fruit and Flower Child Care Center.” The center is a registered nonprofit with revenue of nearly $2.3 million, according to its 2020 tax filing. The preschool has mixed reviews on Google, with some complaining about a nonrefundable $100 fee just to be put on a waitlist. Nearly all of the five-star reviews came from people currently listed as members of the preschool’s board of directors.

Multiple further inquiries sent to Fruit and Flower about their handling of the infection were not responded to.

On Aug. 17, the Oregon Health Authority announced the state’s first pediatric case of monkeypox but said the child was not infected at a school or daycare.
It is unclear how many days, if any, Reyes Rojas may have been around children at his job while infected with monkeypox. On July 20, he tweeted about being tested for the virus: “Had my first prostate exam by this cute old lady and she tested me for monkey pox even though we both think I don’t have it.” The statement appears to contradict an update he posted on GoFundMe. “I am happy that I noticed the signs and quarantine [sic] immediately before spreading monkeypox.”

The same day Reyes Rojas was suspended from the state’s registry for childcare, he posted an update on his fundraiser saying the preschool’s director agreed to let him return to work within two weeks once his remaining lesions are healed. The immediate suspension bars him from caring for children unrelated to him for five years. He has a right to demand a hearing within 90 days.

Reyes Royas’s last Twitter post on the “@Sensual_Bottom” account before locking it from public view was on Aug. 11 and featured a close-up video of him having sex with a man.

GoFundMe did not respond to a request for comment.