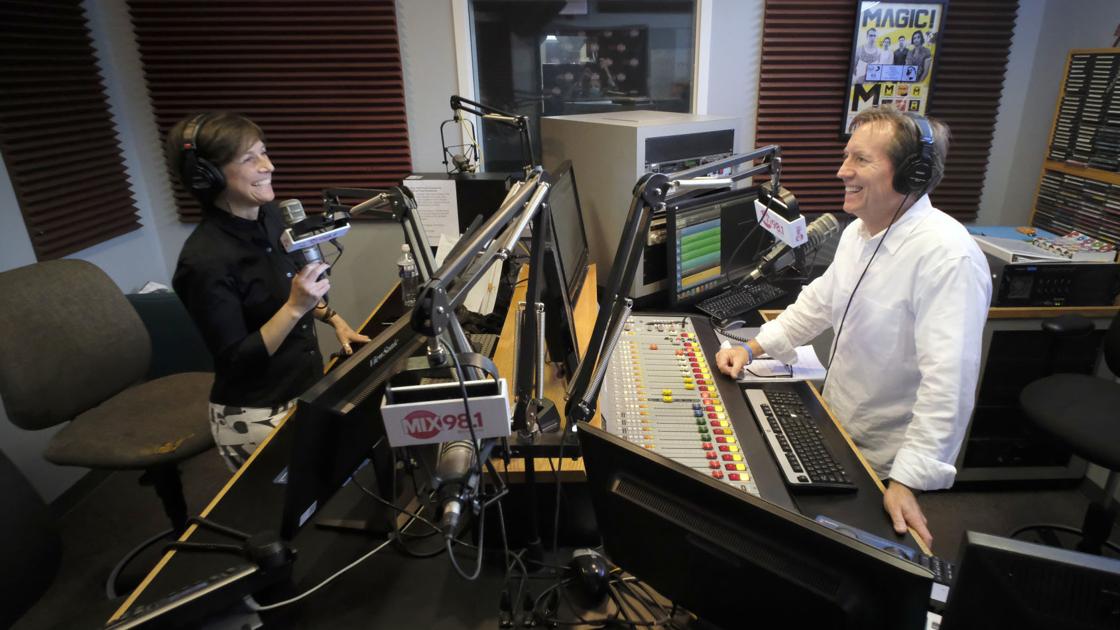 Life can get difficult during a pandemic. Pop radio stations want you to know they’re here for you.

Adult contemporary stations across the country have been playing more upbeat, hopeful and nostalgic songs since the country went into lockdown. At local station 103.7 Play, you’re more likely to hear “Underdog” by Alicia Keys because it’s about overcoming odds, “Good as Hell” by Lizzo because it’s bouncy and “Unwritten” by Natash Bedingfield because it offers a message of writing your own life story.

Every two and a half hours or so, it plays “Hero” by Mariah Carey and includes listeners’ messages of thanks to first responders, teachers or delivery drivers.

Pop stations quickly realized that during troubling times, people want to feel better when they turn on the radio.

“Our job is to respond to what our audience is going through,” said Melissa Chase, a 103.7 morning show host and program director at SummitMedia. “We wanted to create a friendly place, a safe space, an escape.”

At the same time, 103.7 Play has dialed back new songs and songs that reference death, even if they aren’t necessarily negative. Getting spun less are “Die Young” by Ke$ha and “Live Like We’re Dying” by Kris Allen. The mention of death can be a trigger for some listeners.

Mix 98.1, another local adult contemporary station, instituted “feel-good weekends” at the beginning of May. While the playlist hasn’t changed, the most positive songs already on the playlist are getting played more, said Zac Davis, a vice president for Entercom, which owns the station.

1980s hits “Flashdance … What a Feeling” by Irene Cara and “Never Gonna Give You Up” by Rick Astley are two favorites of feel-good weekends that are getting more air time.

The station dubbed Fridays as “fan-favorite Fridays,” inviting listeners to make requests. One of the first songs asked for after the pandemic arrived was “We Are The World,” a 1985 hit crafted by Michael Jackson and Lionel Richie and performed by dozens of the country’s most famous artists at the time. It calls for the world to come together as one during a time when people are dying.

“How perfect to bring that song back now,” said Jeff Wicker, a Mix 98.1 morning show host.

Wicker said that radio stations learned after the attacks on Sept. 11, 2001 how to strike the right mood during a national crisis. It took them awhile to realize it’s OK to joke or laugh on air and that levity has its place even in tough times. When the COVID-19 outbreak began earlier this year, radio hosts and program directors were more prepared. Wicker knew it was acceptable to joke about grabbing the last roll of toilet paper at the grocery store.

“We really can’t have a bad day, because we know that other people are struggling,” said Rebecca Wilde, a Mix 98.1 morning host. “And we’re sort of in that position where we can change something for them.”

Following Sept. 11, there were rumors that radio station owner Clear Channel suggested to its broadcasters that certain songs not be played if they carried a negative connotation. The list supposedly included “It’s the End of the World as We Know It (And I Feel Fine)” by R.E.M. and “Crash Into Me” by Dave Matthews Band.

Sean Ross, a radio industry expert who edits a newsletter called Ross on Radio, said he doesn’t believe radio station companies are making any directives on what not to play right now. They’re trying to make common-sense decisions and not do anything that resembles a corporate edict. The playlists for 103.7 Play and Mix 98.1 are assembled locally.

“I think people are determined not to make any summary judgment about music this time,” Ross said. “Everybody wants to be more broadly up-tempo and positive.”

But at the same time, sad music hasn’t gone away. The new songs “Death Bed (Coffee for Your Head)” by Powfu and “If the World Was Ending” by JP Saxe and Julia Michaels are both sad and rooted in themes of death. And both songs are very popular.

The pandemic isn’t the only factor that would cause radio stations to play more upbeat or more nostalgic music these days, Ross said. Pop music as a genre has been in decline the past few years, leading radio stations to turn to more established favorites. And labels often release their peppiest music in April or May in hopes of creating the song of the summer.

Pop stations aren’t the only ones trying to get more uplifting; country formats are doing it, too. “Be A Light,” written by Thomas Rhett and accompanied by Keith Urban, Reba McEntire and Hilary Scott of the band Lady Antebellum has been a popular item on the playlist of station K95, said its program director, Garret Doll.

And while older songs are getting plenty of air time now, some brand new songs have gained popularity in large part because they were written about life during lockdown. Country artist Luke Combs penned a tune titled “Six Feet Apart” and recorded it during quarantine. He sings about everything he misses, like his mother and father, giving hugs and shaking hands.

Pop rock duo Twenty One Pilots wrote a song called “Level of Concern” about asking for comfort during an unsteady time. And pop stars Ariana Grande and Justin Bieber recorded a duet called “Stuck with U,” a waltz about being in love with the person with whom you’re quarantining.

Close
Send this to a friend