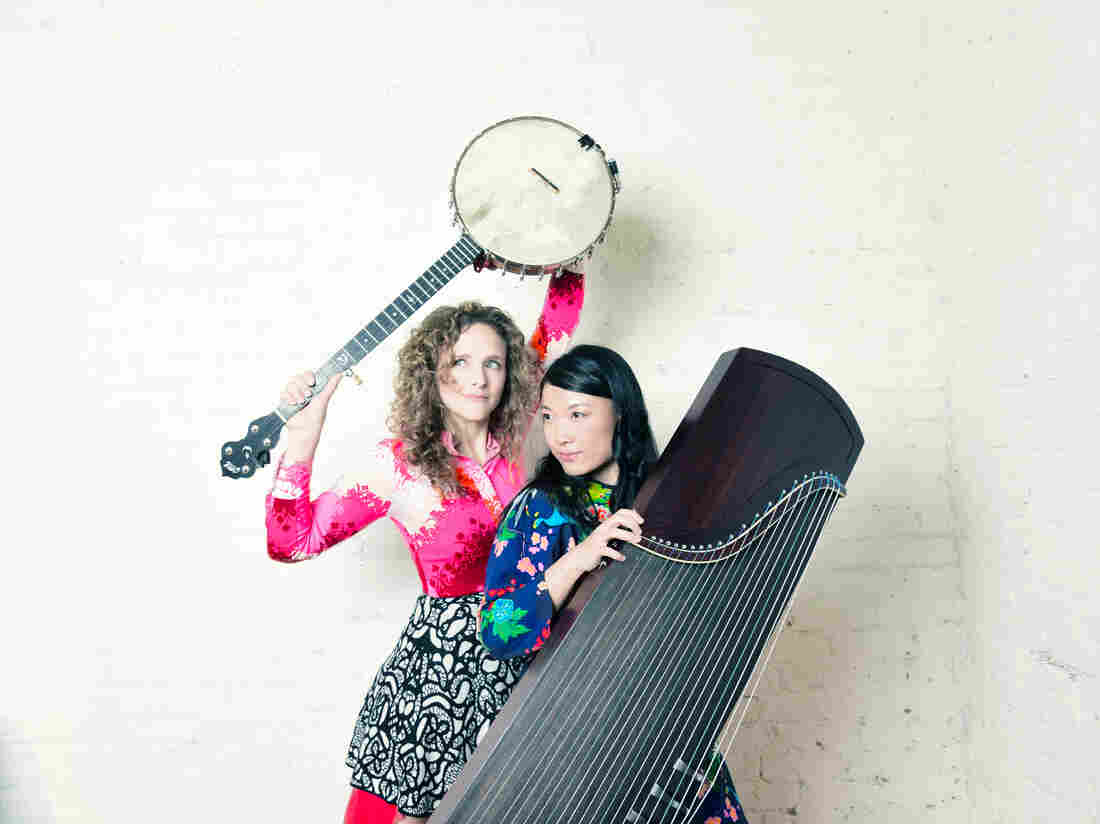 Abigail Washburn and Wu Fei are masters of Appalachian and Chinese folk music, respectively. On their self-titled debut album they combine traditional songs from across the U.S. and China. Shervin Lainez/Courtesy of the artist hide caption

Shervin Lainez/Courtesy of the artist

Wu Fei and Abigail Washburn, who released a self-titled debut album as a duo on Friday, have lived almost parallel lives. Both women were born in 1977, and both grew up to be accomplished and virtuosic folk musicians, albeit in completely different folk traditions. Wu is a composer and a world-renowned virtuoso on the guzheng, a 2500-year-old string instrument which is a staple of Chinese folk music. Meanwhile, Washburn is a banjo player who has won a Grammy Award for her reinterpretations of traditional Appalachian music.

Wu and Washburn are also longtime friends. Their new album, which weaves together traditional folk tunes and melodies from across the U.S. and China, is the product of both their illustrious solo careers and over a decade of collaboration and friendship.

NPR’s Lulu Garcia-Navarro spoke to Wu Fei and Abigail Washburn about how their friendship began and the stories behind the traditional songs that they arranged and recorded for the album. [Editor’s Note: This interview and its performances were pre-recorded before social distancing measures were implemented across the country.] Listen to the radio version in the audio link above, and read on for highlights of the interview, including a live in-studio performance of “Water Is Wide / Wusuli Boat Song.”

On the origins of their friendship and musical partnership

Abigail Washburn: We met in a small mountain town in Colorado because a friend of ours, Nick Forster, who hosts eTown radio show, told us that we had to meet each other, so we did. And we played together in this little church up in the mountains with a band I was in called the Sparrow Quartet and it was really fun. We got each other’s email, because that’s what you did back in 2006, and we started emailing each other. And over the years we started, you know, breaking up with boyfriends, getting married and having babies, all on parallel paths, and then visiting each other in the U.S. and in China. And eventually we started making some music.

Washburn: One day we were sitting on my porch. We had asked a babysitter to watch the little ones while threw back and forth ideas, which is one of the funnest things we get to do, just share stories and songs that we’ve heard that have been passed down to us. And in desperation, as a new mother, I said “Fei, do you have any songs that actually put your babies to sleep?”

Wu Fei: So naturally I was like “Oh, this river song! Let’s try this one.”

“Wusuli Boat Song” is from the Hezhe people, also known as the Nanai; in their own language it’s called “Nanai,” in Mandarin it’s called “Hezhe.” It’s one small group of ethnic minorities who live on the Wusuli River in northeastern China — it actually runs through China and Russia, so half of the population live on the China side and half live on the Russia side — and they’ve traditionally lived in the river’s bank and boats.

After 1949, when the People’s Republic of China was established, there was a lot of the reestablishment of the nationalist sound of Chinese music. So a lot of songwriters or composers or ethnomusicologists were sent by the government, to search for folk songs. There were a lot of beautiful folk songs, of course, all over the country. This one was studied and recorded by someone who later became a really famous singer [Guo Song] by discovering this song. Since I had memory, I remember this song as this famous singer’s song. Once Abby and I started working together on this record, I felt the absolute necessity to trace down what the song really came from and I discovered it’s actually the Hezhe people’s original folk song. And they actually sued this singer, and there’s [an online document] in English and Chinese about this lawsuit.

The lyrics that the singer added were propaganda, the party’s propaganda. And then the town hall of that tribe in the Wusuli River area, they decided “We need to take our melody back, but we don’t want the lyrics.” It’s the intangible heritage of their own culture. That happened about a decade ago. So I now have finally learned the truth of where this tune comes from. The population of the Hezhe people is tiny; it’s no more than 30,000. However, this song has been popular among 1.4 billion people.

Washburn: Something that’s a great privilege and reminder is that we’re all people. And the systems we live within are things we need to contribute to and illuminate what works for us and what doesn’t. A lot of that comes from the day-to-day life stuff, and the ability to remind us that we are all connected to families, we’re all connected to cooking and working and making our lives every day something that’s worthwhile and worth being here. I think that’s what Fei and I really feel connected on singing about; that is actually the most powerful thing in our world, that connection of the universal humanity of living day-by-day and trying to find the beauty in it and magnify it.

Wu: Just building communities [with] the people who matter in your own circle of life, and knowing that actually people from other parts of the world do exactly the same.

NPR’s Denise Guerra and Hadeel Al-Shalchi produced and edited the audio of this interview. Cyrena Touros and editorial intern Jon Lewis adapted it for the Web.