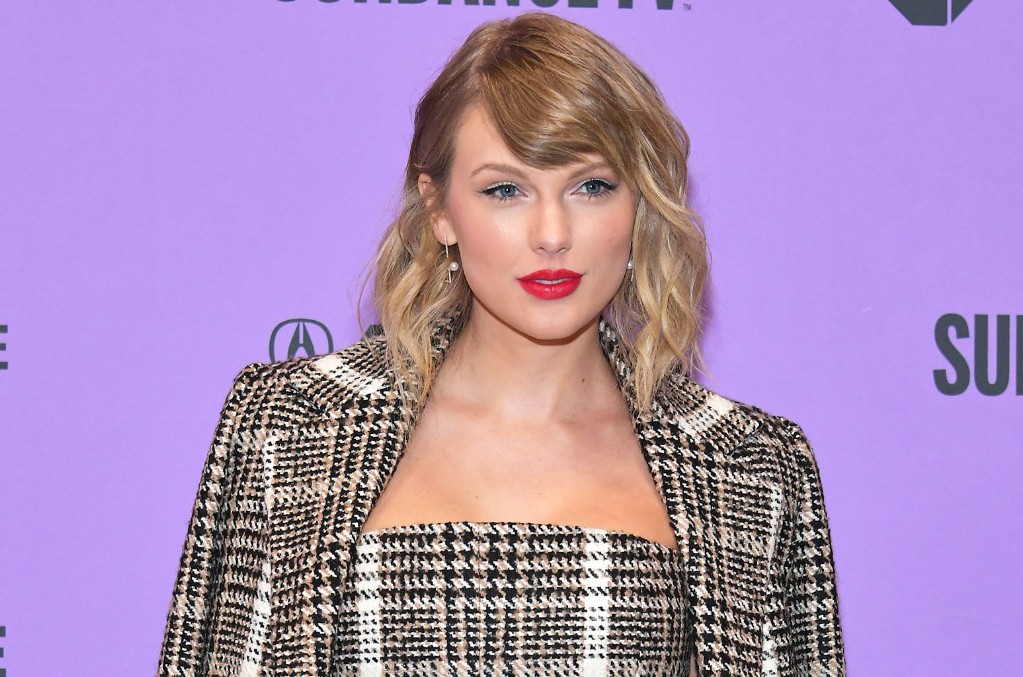 As social distancing continues amid concerns of coronavirus spreading, music continues to offer some positivity and a ray of light through these uncertain times.

This week, Taylor Swift contributed to that by donating $3,000 to some fans who are out of work; BTS gave the ARMY some hope with a sweet video; and Elton John announced an exciting all-star benefit concert that’s set to air on Sunday (March 29). And of course, there’s plenty of new music as well. Dua Lipa, 5 Seconds of Summer, Rosalía, Childish Gambino, Kygo and more are ready to help you dance your worries away.

Take a look at some of the most uplifting moments of the week below.

One week after surprise-dropping a project called Donald Glover Presents on March 15 — which featured no track info and wasn’t even available on Spotify — Childish Gambino (whose real name is Donald Glover) delivered the album to all streaming services, officially titled 3.15.20. While track names were revealed, most are simply titled with the song’s timestamp throughout the album’s 57-minute run time.

This week, BTS became one of the many artists whose tour was postponed over coronavirus concerns. But that didn’t stop them from sending a message of hope for fans around the world. “We realize more than ever how meaningful our everyday life was,” they said in a video, after being nominated by the cadets of the Korea Armed Forces Nursing Academy. “We are connected closely and share both pain and joy. If we have the courage and will to overcome anything, I’m sure we’ll succeed with the power of our connection.”

Several artists have shared heartfelt tributes to those who are on the frontline of fighting the spread of COVID-19, and on Monday (March 23), Katharine McPhee channeled her inner Mariah Carey for her own homage. The songstress sang a stunning rendition of Carey’s “Hero” while her fiancé David Foster accompanied her on piano. “We dedicate this to all the doctors, nurses and healthcare workers – the actual heroes – who are tirelessly helping all of us in these times of despair,” she captioned a tweet about the video.

Just when you thought country’s beloved couple couldn’t get any cuter, Garth Brooks and Trisha Yearwood served up a swoon-worthy rendition of Bradley Cooper and Lady Gaga’s A Star Is Born hit “Shallow.” The pair decided to take on the challenge after a fan requested it during Brooks’ Facebook live stream #GarthRequestLive on Monday night. Unsurprisingly, their vocals paired beautifully as Brooks strummed his acoustic guitar, creating a spectacular performance for fans tuning in — and fulfilling Trisha’s self-proclaimed “fantasy.”

Justin Bieber has already been giving fans videos every Monday and Wednesday as part of Changes: The Movement, but he now has gifts for Tuesdays and Thursdays too. On Tuesday (March 24), Bieber announced that he’ll be unveiling new compilations every Tuesday and Thursday for the foreseeable future while fans are social distancing. He kicked things off with a little “R&Bieber,” then aptly titled his next playlist “Work From Home.”

This year’s crop of American Idol talent has seen singer-songwriters shine, particularly Kansas-residing artist Arthur Gunn. The singer won Lionel Richie, Katy Perry and Luke Bryan over with a smoky rendition of Creedence Clearwater Revival’s classic “Have You Ever Seen the Rain” in his audition, and decided to bring the song out once again while vying for a spot in the Top 40. But Gunn put a brilliant twist on the track, completely changing up the melody to showcase his vocals even more — and it was so good, Lionel Richie couldn’t help but shed a tear.

Alex Rodriguez taught Jennifer Lopez how to crush a baseball

When you’re engaged to a former professional baseball player, you better know how to hit a ball. What Alex Rodriguez didn’t realize is this his fiancée is more than capable of that. The veteran New York Yankee spent part of his quarantine time playing baseball in the backyard with J. Lo and their daughters, only to find that Lopez catches on pretty quickly. “The only depressing part was watching Jen lock in on her swing and launch one,” he joked on Instagram. “What can’t she do? She even hits better than I do!”

Today was a dream day for me. First, I’d like to thank everyone who tuned in to watch my first ARod baseball clinic. I hope you guys learned something and enjoyed it as much as I enjoyed doing it! . I mentioned this during the livestream, but do you know what Shakespeare did when he was quarantined because of the plague? He wrote King Lear. You can let this time pass you by, or you can seize it and use it to work on your swing, watch a ton of video, and make yourself a better player. Or a better anything, for that matter. . . You can also use it to spend quality time with family. We had a blast playing a little baseball in the yard with the four powerful young women in my life. . When I was their age, I couldn’t afford bats, balls ⚾️ and gloves. I was lucky to have great mentors to look out for me, and for the @bgcmiamidade giving me a place to play. . Today, it was so much fun watching them take some cuts. The only depressing part was watching Jen lock in on her swing and launch one. What can’t she do? She even hits better than I do! #ShesANatural

Music fans may be bummed that the iHeartRadio Music Awards aren’t happening on Sunday, but Elton John is here to save the day. The legendary singer will host an hour-long, star-studded special in place of the awards show, featuring Alicia Keys, Billie Eilish, the Backstreet Boys, Mariah Carey, Tim McGraw, Green Day’s Billie Joe Armstrong and more — all performing live from their respective homes, of course. Titled Fox Presents the iHeart Living Room Concert For America, the show will tribute those who are helping fight coronavirus on the frontlines, and viewers will also be able to support Feeding America and First Responders Children’s Foundation while they tune in.

Leave it to Cardi B to turn a global pandemic into a smash hit. A week after now-viral Cardi’s Instagram rant about the coronavirus was turned into a catchy dance floor-ready tune by Brooklyn DJ iMarkkeyz, the song took off so much that it’s already a top 10 hit. Simply titled “Coronavirus,” the track sold 3,000 copies in the week ending March 19, which led it to a No. 9 debut on Billboard’s Rap Digital Song Sales. The song also landed at No. 13 on the R&B/Hip-Hop Digital Song Sales (both charts dated March 28).

It’s no secret that Taylor Swift loves taking care of her most dedicated fans. She proved that once again on Wednesday (March 25) when she reached out to some Swifties who are out of work as a result of the nationwide quarantine. Swift personally reached out to at least 10 fans, offering $3,000 stimulus checks to help ease their pain a bit. Rightfully so, those fans were as excited as they were relieved to receive the help from T-Swift: “I AM HAVING AN ABSOLUTE BREAK DOWN,” one recipient tweeted.

Brooklyn DJ D-Nice has become an Instagram Live icon while social distancing, drawing more than 100,000 viewers to his #ClubQuarantine event on Saturday (March 21), including celebrities like Michelle Obama, Missy Elliott and Ludacris. After such a massive response, DJ D-Nice (whose real name is Derrick Jones) decided to use his newfound popularity for good. He teamed up with the former First Lady to help viewers register to vote, in collaboration with Obama’s voter registration organization When We All Vote, and the results were huge: The org’s texting platform, Outvote, received text messages from 407,824 eligible voters and helped nearly 13,000 people start or complete the voter registration process, according to a spokesperson for When We All Vote.

Ciara and her son showed off their swag

Judging by Ciara’s Instagram, her and Russell Wilson’s family are making the most of their time at home together — and making an awful lot of TikToks. One of the cutest vids stars her and her son, Future, as the two dance to RunitupTahj’s “Hit Yo Groove.” Ciara instructs her little man on how to do classic party moves like “The Woah” and “Hit Dem Folks,” while they both sport mirrored sunglasses and turn on their swag. Talk about #FamilyGoals.

In an exciting turn of events, Dua Lipa released her highly anticipated (and dance floor-ready) sophomore album Future Nostalgia one week early, as she announced earlier this week. Four other albums that were expected for release on Friday (March 27) also arrived: Jessie Reyez’s long-awaited debut Before Love Came to Kill Us; 5 Seconds of Summer’s fourth LP, Calm; Pearl Jam’s 11th set, Gigaton; and PartyNextDoor’s third album, Partymobile. If you’re not looking for a full album, there’s several other new tunes to dive into from Rosalía, Kygo (with Zara Larsson and Tyga), Florida Georgia Line and even Bob Dylan. Check out Billboard’s rundown of some of today’s best new releases here!