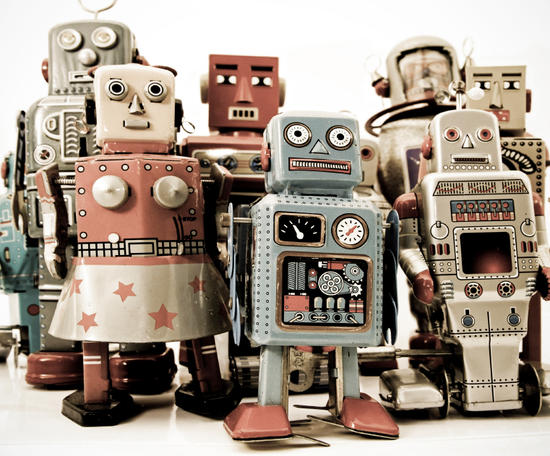 Artificial Intelligence, or AI, is the use of computer systems to execute tasks that would normally require human intelligence. This includes speech recognition, visual identification and decision-making.

In the words of billionaire Investor
Charlie Munger (Trades, Portfolio), “I’m all for Artificial Intelligence, as there is such a shortage of the real thing.” But all jokes aside. the AI industry was worth an estimated $93.5 billion in 2021. This is forecasted to grow at a blistering 38.1% CAGR up until 2030, according to a report from Research and Markets.

Thus, in this article, I reveal two of my favorite stocks which I believe are strong plays on the future of Artificial Intelligence; let’s dive in.

Tesla (TSLA, Financial) is a global leader in electric vehicles, and it also dabbles in solar panels and energy storage. But what many may overlook is that Tesla is also a strong leader in Artificial Intelligence. The company recently held its AI Day for 2022, where it showcased a host of AI moonshot projects.

Perhaps the most-anticipated was Tesla’s reveal of the prototype model of its AI humanoid robot called Optimus, which walked slowly out on stage before waving to the crowd. Tesla’s CEO Elon Musk aims to create a “useful robot” that can perform manual repetitive tasks such as picking up parcels and even helping out around the home. 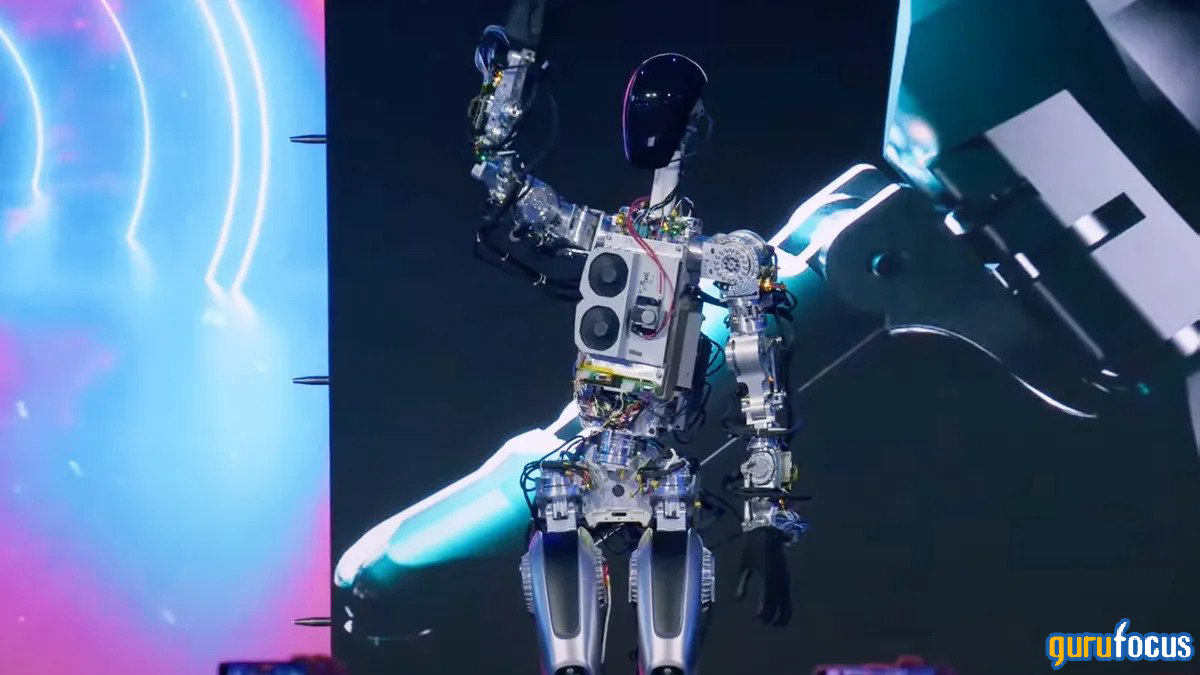 Safety is the first priority for Musk in order to avoid a “Terminator” style situation. Tesla plans to implement a command such as “STOP” which will stop the robot no matter who says it. The beautiful thing about this robot is Tesla has designed it for mass production, and Musk thinks it will ultimately cost less than a car at approximately $20,000. Musk also stated the robot will be available for customers to order and receive within the next three to five years, although in the past he has been known to be overly optimistic on timeframes.

The Optimus robot is powered by the same self-driving computer as Tesla’s cars and uses an AI-powered neural net. A “biological neural net” is basically a brain, which takes in sensory information through our eyes, ears, nose and other senses before making decisions. An “artificial neural net” works much the same way, except instead of eyes it uses cameras as sensors. This sensory data is then input into a computer model before making decisions. AI models must be trained in a similar manner to humans are trained when we are children and our brains are developing. For example, for a human to become great at the piano, they must practice continuously for many years. The neuroplasticity of the brain then adapts to the task and enables execution. Thus for the Tesla robot, it must be trained on specific tasks in order to improve, but it also can use simulation data to learn.

Tesla’s self-driving technology is also powered by AI. Its platform uses the vehicle cameras and computer vision to collect a vast amount of data about road conditions and the best practices for driving.

AI models are only as good as the training data provider, but the great news for Tesla is it has the largest self-driving data set of any company on the planet. This is because Tesla has sold approximately 2.8 million electric vehicles, and thus all these vehicles act as data collectors. Tesla has also built an entire simulation of San Francisco in the Unreal gaming engine in order to train its self-driving AI.

Tesla’s full self-driving beta version 10.69 now has 160,000 drivers testing the feature, which is up from just 2,000 drivers in 2021. As the company collects more data, its AI will increase in accuracy and, as Musk says, it will be a “march of nines” to get to a safety rating that is 99.999999% safer than humans. All the data is fed into a Tesla Dojo supercomputer, which is so powerful it even tripped the power grid in Palo Alto, California.

Tesla continued to generate strong financial results in the second quarter of 2022. Revenue skyrocketed to $16.93 million, which surpassed analyst estimates and increased by 42% year over year. 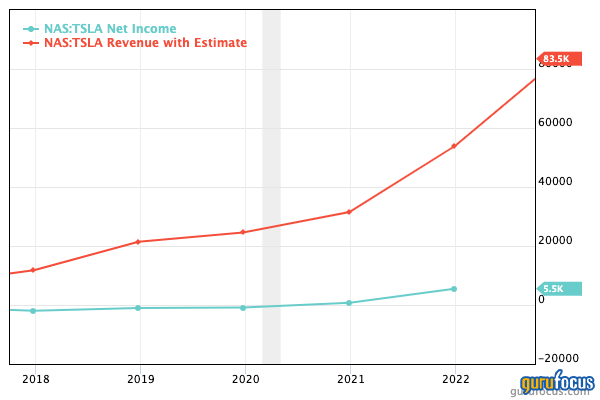 The company also continued to generate strong profits, with earnings per share of $0.65, which beat analyst estimates by $0.15.

In terms of valuation, the GF Value chart gives Tesla a fair value of $360 per share, which makes it modestly undervalued relative to historic multiples. 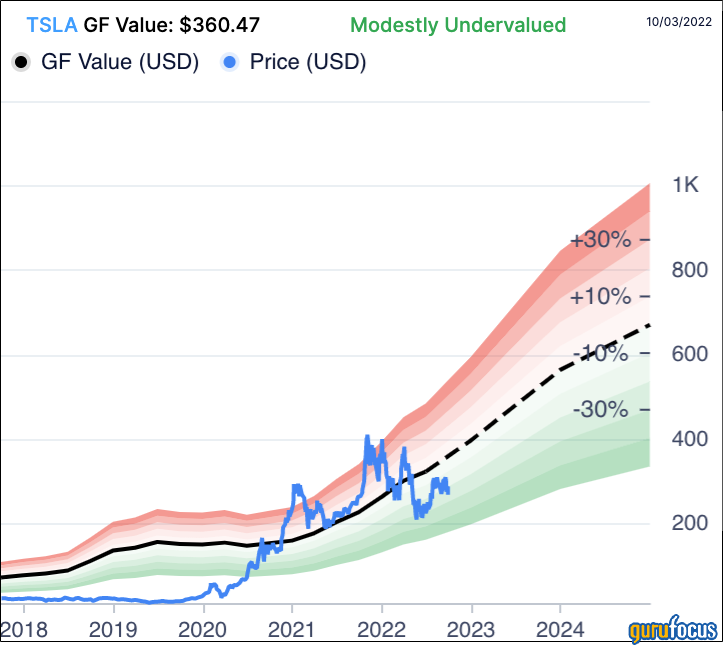 Tesla is still trading at a high price-earnings ratio of 61, although this is substantially cheaper than historic levels. In addition, Tesla is in a high growth stage and thus is aggressively reinvesting profits for growth, which skews the ratio. 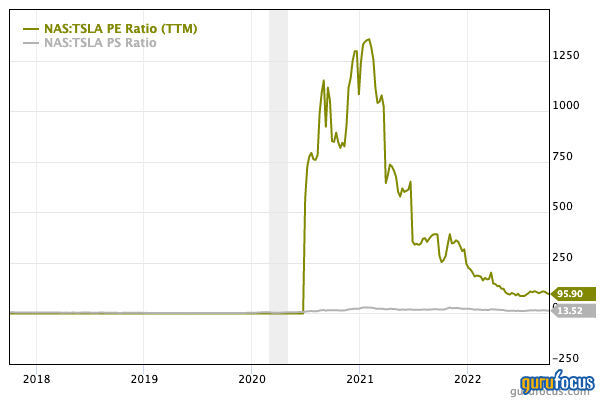 The other AI stock I want to highlight is C3.ai (AI, Financial), which had the good fortune as one of the first AI pure-play public companies to grab the AI ticker. The business is a leader in AI software for enterprises. Its flagship platforms gives enterprises the ability to create simple AI models using low code. This enables them to automate tasks, assess supply chain risks, optimize inventory, improve processes and even manage their energy usage better.

C3.ai generated mixed financial results for the first quarter of its fiscal year 2023. Revenue was $65.3 million, which popped by 25% year over year. However, this was lower than prior growth rates and missed analyst expectations by $713k. This was partially driven by the business’ transition from a subscription-based model to a consumption-based model, similar to Amazon (AMZN, Financial) Web Services. This has meant an entire shift in strategy and a reorganization of its sales team and thus there have been some teething issues. However, longer-term this model is expected to be a much easier sell for customers as it adjusts to their demand. This will be especially useful given the tepid macroeconomic conditions. CEO Thomas Siebel even stated that its customers are “scrutinizing big deals” like never before due to economic uncertainty.

C3.ai generated gross profit of $46.9 million in the quarter, which translates to a solid 72% gross margin. However, the company is unprofitable on an operating basis with a loss per share of $0.67. The good news is the business is investing aggressively for growth and on an adjusted basis, the loss per share beat analyst expectations at $0.12 per share. 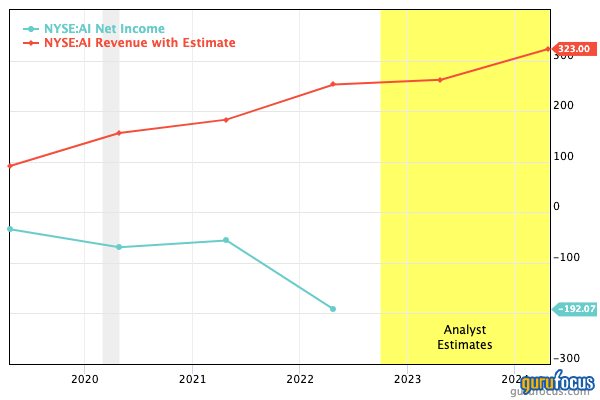 C3.ai also is also in a strong cash position with $930 million in cash reserves.

The company trades at a price-sales ratio of 5.2, which is cheaper than its five-year average. 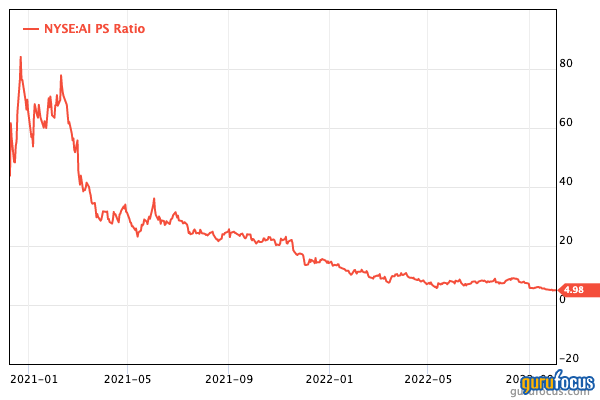 Both Tesla and C3.ai are great plays on the growing Artificial Intelligence industry in my view. I personally believe Tesla is the strongest play right now, given its momentum, proven ability to execute and strong competitive advantages. C3.ai is more speculative as the company is going through a business model shift, and thus we will have to wait and see if this works well or not. 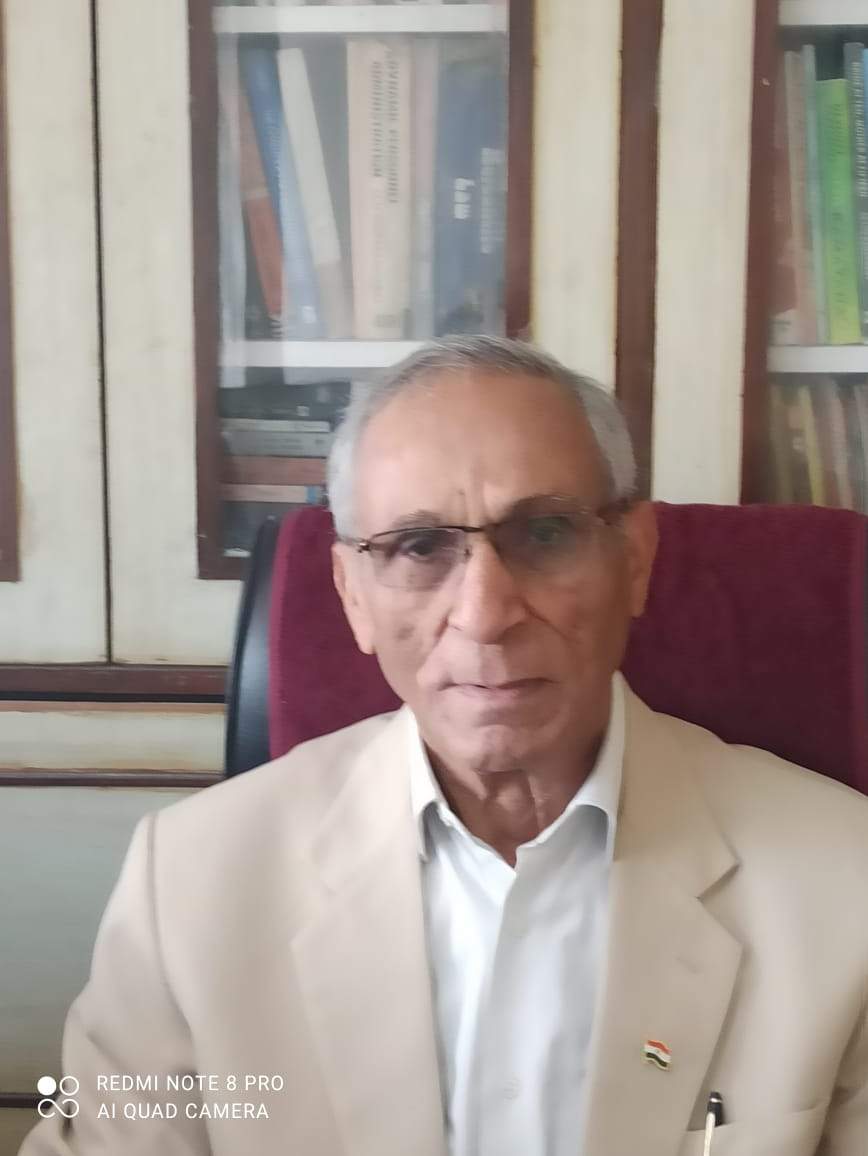