Actress Sumona Chakravarti has been trending for her recent Instagram posts, which the Internet thinks have a connection to the new season of The Kapil Sharma Show. Kapil Sharma recently announced the third season of his popular comedy show, following which he shared a few photos with the show’s cast. Sumona Chakravarti, who has featured as Kapil’s onscreen wife in the show’s previous seasons, was missing from both the photos posted by Kapil Sharma, suggesting she may not have been roped in for the third season. In an Instagram story, Sumona, who had earlier revealed she is unemployed, shared a rather suggestive segment from Charlotte Freeman’s book Everything You’ll Ever Need about moving on.

Sumona’s Instagram story about the “horrible feeling” about “leaving a situation” is crazy viral now: “You will never know if something is meant for you if you don’t give it a proper chance. Whether it’s a relationship, a new job, a new city, or a new experience, throw yourself into it completely and don’t hold back. If it doesn’t work out then it probably wasn’t meant for you and you’ll walk away without regret, knowing that you put your whole heart into it. That’s all you can ever do. It’s a horrible feeling leaving a situation knowing that you should have and could have done more. So find the courage to take that chance, find the inspiration to make your next move, and once you do, pour your heart into it and don’t look back.” 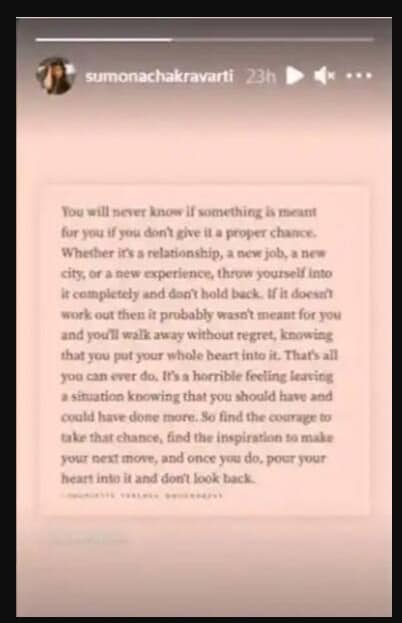 Meanwhile, she also shared this as an Instagram post – a poem by Richard Siken: “I sleep. I dream. I make up things I would never say. I say them very quietly.”

Earlier this week, Kapil Sharma posted a picture of himself along with the cast of the show, which includes Krushna Abhishek, Sudesh Lehri, Bharti Singh, Kiku Sharda and Chandan Prabhakar. They can be seen posing with a photo booth, the text on which reads “I am covid-19 vaccinated.”

Ahead of that, Kapil Sharma trended a great deal for revealing The Kapil Sharma Show is all set to return on TV with a new season. He shared a photo with fellow comedians Krushna Abhishek, Bharti Singh, Kiku Sharda, Sudesh Lehri, Archana Puran Singh and Chandan Prabhakar:

Earlier this year, Sumona Chakravarti revealed in an Instagram post that she’s been struggling with “guilt” in lockdown and that despite being unemployed, she’s able to provide for her family: “Did a proper workout at home after ages. Some days I feel guilty, because boredom is privilege. I may be unemployed and yet am able to feed my family and myself. Sometimes I feel guilty. Specially, when am feeling low due to pms-ing. The mood swings play havoc emotionally.”