The latest tool to be adopted by Israel against the coronavirus pandemic, rapid home virus-testing kits, will be made available to purchase in pharmacies as part of a pilot program beginning this week.

The move was announced after Prime Minister Naftali Bennett held a situational assessment on Friday, after which the premier warned that protection afforded by current COVID-19 vaccines were “weaker than we’d hoped” against the surging Delta variant.

Home tests, used by many countries as a first line of defense against the virus, are generally not thought to have the accuracy of swab tests carried out by trained professionals. The current test for coronavirus requires nasal and throat swabs to collect mucus and saliva, which are then tested to confirm infection, if present.

Health officials hope the public will use the tests before visiting the elderly or immunocompromised, as well as for children attending schools and day camps.

However, a member of the Health Ministry panel that has been advising the government on COVID-19 inoculations said on Sunday that it would make more sense for testing to be carried out by schools, rather than by families.

“It would be preferable to deploy rapid testing in schools,” Professor Galia Rahav of Sheba Medical Center told Army Radio. “It makes more sense to do it at the entrance to educational institutions, rather than imposing it on families — we know that our response in the country is not the best.”

Boxes of home testing kits for COVID-19 from Britain’s Department of Health stand stacked together before being delivered to local residents in Woking, England, on February 2, 2021 (AP Photo/Matt Dunham)

Rapid tests are also expected to be deployed at the entrance to large events, where the unvaccinated will need to show a negative test result in order to gain entry under the “Revelry Pass” system for weddings and other large indoor events.

The plan, which is slated to come into effect on July 21, will limit large gatherings to those who are vaccinated, recovered or present a negative COVID test. It was not yet clear who would pay for the tests, or if they would be subsidized.

Army Radio reported on Sunday that health officials were unhappy with the plan, calling instead to immediately reintroduce the Green Pass vaccination certificate — which would once again limit attendance at performances, restaurants, hotels and gyms — in light of the continued rise in new coronavirus cases.

The latest data from the Health Ministry on Saturday showed that new coronavirus cases totalled more than 1,000 on Friday, for the first time in nearly four months.

The number of cases diagnosed on Friday stood at 1,118. The total number of active cases was at 6,563, of which there were 58 serious cases.

Rahav said Sunday that 60-70% of those hospitalized in serious condition were fully vaccinated, but many were older and many of them had serious preexisting medical conditions. 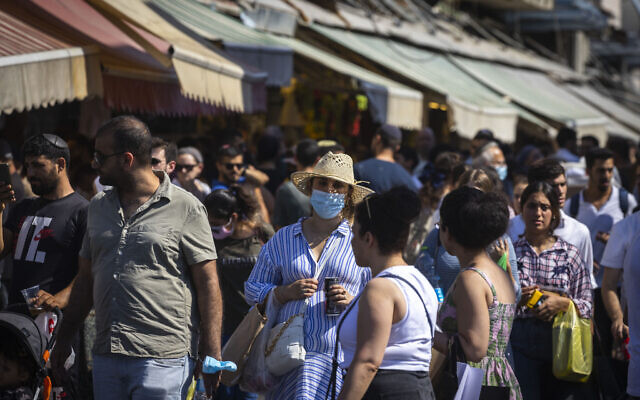 People shop at the Mahane Yehuda market in Jerusalem on June 15, 2021. (Olivier Fitoussi/Flash90)

“It is impossible to say what will happen. Between 60-70% of the patients in serious condition have received two doses of the coronavirus vaccine,” she said. “Most of them are aged 70 and over, and some have serious background medical conditions.”

Eran Segal, a health expert advising the government on its pandemic response, tweeted on Saturday that, while infection numbers are rising, the number of new serious cases per day remains far lower than in past outbreaks, following the country’s mass vaccination rollout.

Israel is expected to see a major increase in enforcement of mask-wearing regulations this week, as local municipality inspectors once again spread out at shopping malls and other indoor locations to fine people found without face coverings. There will also be increased enforcement of quarantine for those who are obligated to self-isolate.

In an interview with Channel 13 on Saturday, Health Minister Nitzan Horowitz said he believed actions taken by the government so far were insufficient.

“We’re seeing a rise in infections and serious cases… What are we waiting for? To have thousands of cases a day? Hundreds in serious condition? For hospitals to fill up? We need to stop playing games.” 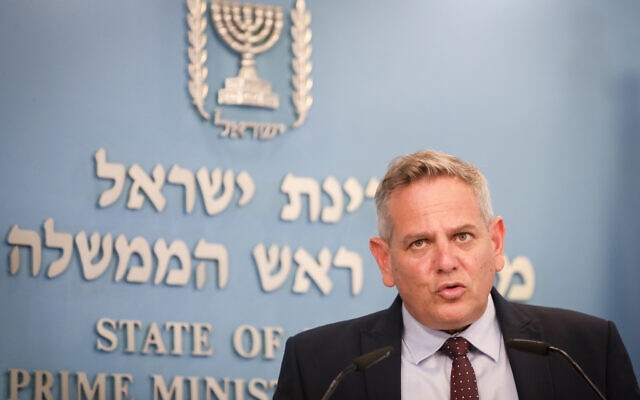 New Health Ministry director-general Nachman Ash said on Saturday that he doesn’t believe there will ultimately be another coronavirus lockdown, but could not rule out the possibility.

“Anything can happen, but we don’t want to reach a lockdown situation,” he told Channel 12.

He urged the public to follow health rules in order to help curb infections.

All travelers, including those who are vaccinated or have recovered from COVID-19, are now required to self-isolate for 24 hours upon arrival to Israel, or for a shorter period if they receive a negative test result.

Those returning from 15 countries deemed to have high infection rates are required to quarantine for seven days with a negative test result, according to the ministry’s updated guidelines. The full quarantine period was recently shortened from the previous 10-14 days.

The Health Ministry said on Friday that from July 23, Spain and Kyrgyzstan will be added to the list of countries that Israelis are barred from flying to due to extreme rates of infection — provided that a government committee approves the ministry’s request.

The countries that are currently off-limits for Israelis are Uzbekistan, Argentina, Belarus, Brazil, South Africa, India, Mexico and Russia. Israelis who enter the country after visiting any of those countries can face a NIS 5,000 ($1,500) fine.


You’re serious. We appreciate that!


We’re really pleased that you’ve read X Times of Israel articles in the past month.

That’s why we come to work every day – to provide discerning readers like you with must-read coverage of Israel and the Jewish world.

So now we have a request. Unlike other news outlets, we haven’t put up a paywall. But as the journalism we do is costly, we invite readers for whom The Times of Israel has become important to help support our work by joining The Times of Israel Community.

For as little as $6 a month you can help support our quality journalism while enjoying The Times of Israel AD-FREE, as well as accessing exclusive content available only to Times of Israel Community members.

Already a member? Sign in to stop seeing this